Washington Capitals: Is a Seventh "Seven" in the Cards? On the Matter of Winning Streaks 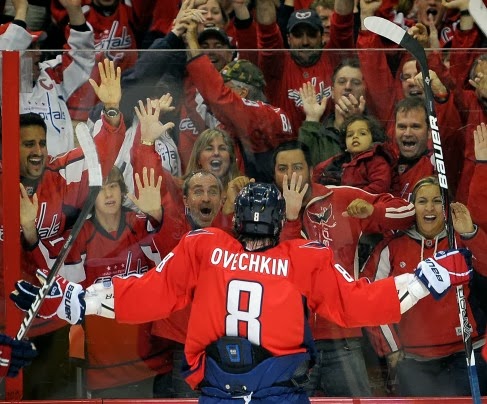 The Washington Capitals find themselves on the outside looking in at a playoff berth as the NHL takes its Olympic Games break.  With 23 games left to play, the Caps are one point behind the Detroit Red Wings for the second wild card spot and three points behind the Philadelphia Flyers for third place in the Metropolitan Division and an automatic berth in the post-season.

It is not as if the Caps find themselves in a dire situation, at least insofar as the standings points situation is concerned.  The Caps are tied with the Columbus Blue Jackets and the Ottawa Senators for ninth place in the Eastern Conference with 63 standings points, and they are only four points behind the New York Rangers for sixth in the conference.

At risk for the Capitals is missing the playoffs for the first time since the 2006-2007 season, a string of six straight post-season appearances and counting.  With 23 games left, one might wonder what has been missing for the Caps this season compared to those six seasons and whether they can find it in the home stretch.

One thing that jumps off the page is this fact.  In each of the last six seasons the Caps have had a winning streak of at least seven games.  This season their longest winning streak is four games, back in early November when they beat Philadelphia, the Florida Panthers, the New York Islanders, and the Minnesota Wild in succession.  Washington entered the Olympic break on a modest two-game winning streak, so there is the opportunity out of the gate to see if they can extend their streak of years with long winning streaks.  Given that for the Caps extending one streak – the consecutive years stretch with a seven-game winning streak – might be necessary to extend the playoff appearance streak, it merits some consideration what characterized those streaks and whether the Caps might have it in them to repeat them as they enter the home stretch.

Winning means scoring more than your opponent.  Or, for the defensive-minded, holding opponents to fewer goal than you score.  The question here is whether the Caps, in their winning streaks of seven or more games in each of the past six seasons, succeeded more as a product of their offense – being especially prolific in goal scoring relative to their norm – or in holding opponents down in those contests.

In those six streaks of seven wins or more the Caps never averaged less than 3.00 goals per game (2010-2011).  After that, the next lowest average scoring offense was 3.57 goals per game in the 2007-2008 season.  Further, as you might expect, their scoring offense in these streaks outpaced their scoring offense over the rest of their schedule.  On average the Caps averaged 3.94 goals per game in the 52 games making up the six streaks, almost a full goal more than the 2.95 goals per game scored in all of the other games over that six-year period.  In 32 of the 52 games they scored four or more goals.  In the 2009-2010 season in which they averaged 3.82 goals over the 82-game season (the highest season scoring output of any team in the post 2004-2005 lockout period) the Caps scored five or more goals an amazing nine times in their 14-game winning streak that season.

Just as amazing, especially given the continuing perception of this team as an offense-at-the-expense-of-defense sort of squad, is that the Caps averaged only 2.02 goals allowed per game over the 52 games making up the six streaks.  That mark is more than three-fourths of a goal lower than the 2.80 goals allowed per game over all the other games played over those six seasons.  In all, in 37 of the 52 games the Caps allowed two goals or fewer.

In today’s NHL it is entirely possible that a team will not outscore its opponents over the life of a winning streak.  In a seven-game winning streak, one could win all seven in shootouts.  But for purposes of this discussion, a one-goal winning margin on average is the lower bound.  We are then left with a question of how much more a team dominates the scoring in their winning streak.

In those six seasons in which the Caps posted winning streaks of at least seven games they never had to goals differential of less than 1.44, that coming in the 2010-2011 season.  Their widest average margin of victory in the streak was 2.43 goals in the 2009-2010 season.  This probably comes as no surprise given that the Caps of that season remain the most prolific offensive team since the 2004-2005 lockout.

That’s not to say that winning big was absent from these streaks.  Eleven times in 52 games the Caps won by three goals, and they won another six games by margins in excess of three goals. 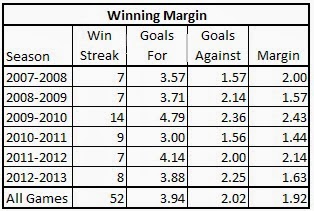 One might think that winning is the product of territorial dominance that leads to all those goals for and the dearth of goals against.  And, that territorial dominance would be reflected in shots for (many) and shots against (few).  That makes sense, but it just does not apply to the Capitals and their six winning streaks under examination here.  Over the 52 games the Caps out-shot opponents on average by a 32.3 to 31.4 margin.  Over the 52 games the Caps out-shot opponents 29 times and were out-shot 23 times (in no game did the teams record the same number of shots).

What the Caps did was shoot more efficiently.  Over the 52 games they shot to 12.2 percent, compared to 10.6 percent in all other games over the six seasons.  There was a considerable range of shooting percentages from streak-to-streak, year-to year.  The lowest shooting percentage they compiled in a streak over this period was 9.2 percent in the nine-game winning streak of 2010-2011.  That year also represented the Caps second-highest average shot total in games of the streak (32.7 shots per game).

The Caps’ highest shooting percentage during a streak was recorded in 2009-2010 (14.9 percent), a rather remarkable achievement given that the Caps sustained that percentage over 14 straight games.  Small wonder that the Caps had those nine games with five or more goals scored over the streak. 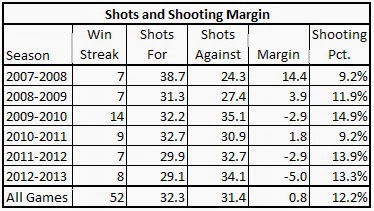 What the Caps did get was superior goaltending.  In the six streaks Capital goaltenders had save percentages of below .930 over the life of the streak only once, that coming in 2008-2009 when the save percentage was .922.  Over the 52 games Capital goalies worked to an aggregate save percentage of .936.  In three of the streaks Capitals goaltenders had goals-against averages lower than 2.00.  Further, these results were the product of consistency.  In the 52 games comprising the six streaks there were only three shutouts pitched by Capitals goalies.  We would point out once more that the Caps allowed two or fewer goals in 37 of those 52 games.

For the power play it was more efficiency that opportunity.  The Caps enjoyed 196 man-advantages over the 52 games comprising the six streaks (3.8 per game).  But here is how the efficiency part played out in that context.  In seven games in which the Caps received only one power play, they converted that lone opportunity four times.

The penalty kill, on the other hand, was not especially effective during these streaks.  Overall, it was 83.1 percent over the 52 games.  Only once – in 2010-2011 – did the Caps’ penalty killers top 90 percent over the life of a streak.  That club killed off 34 of 37 shotrthanded situations (91.7 percent) over a nine-game winning streak.

Twice the penalty kill was 80 percent or worse over a streak.  In 2007-2008 the Caps were 20-for-25 killing penalties (80.0 percent) over the seven-game streak that ended their regular season with a playoff berth, and last season they were 14-for-19 (73.7 percent) in an eight-game winning streak.  The important point about those streaks was opportunities, allowing only 3.6 opportunities in the 2007-2008 streak and only 2.4 opportunities per game in the eight-game streak last season.

One might think that having long home stands would add to the possibilities of starting and sustaining winning streaks.  In fact, 32 of the 52 games covering these six winning streaks were played at Verizon Center.  On the other hand, the Caps did not have a home stand of longer than three games during any of the six streaks.

For the most part, the Caps did not beat up on munchkins in any of their six streaks of seven or more games.  In all of them, the combined records of the teams at the time they played were better than .500 (as measured by available standings points).  The worst collection of teams the Caps faced in their streaks was the group they faced in their seven-game streak to finish the 2007-2008 season (.505).  All seven of those games were played against Southeast Division opponents.

The stiffest competition the Caps faced in any of their streaks was in 2011-2012 (.720), but that comes with a caveat.  That seven-game streak opened the season for Washington.  But there is this, too; the Caps gave three teams in that streak their first regulation loss of the season.  The next most difficult competition came in 2008-2009 when the Capitals won seven in a row from December 23rd through January 6th against teams that compiled a .559 standings points percentage at the time the Caps faced them. 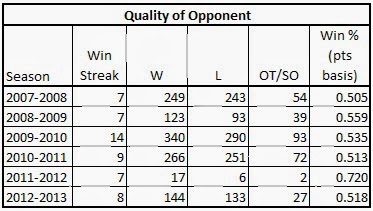 In the end, there are six straight seasons of winning streaks of seven games or more.  The seasons might be different, but there are some things in common.  One thing that is in common is that there is no single factor to explain a streak.  As a group, they are not the product solely of a hot power play, of stingy penalty killing, of lucky shooting, of stalwart goaltending, or even of the "puck luck" of one-goal decisions.  It was a sustained combination of those factors, at least over a two to three week period or so.

And that brings us to this season and the resumption of the NHL schedule.  Washington finds itself only one point out of a playoff spot as games resume this week, but the thin margin might be deceptive.  The Caps’ March schedule is difficult.  Of their 15 games, 12 are against teams that are currently playoff-eligible.  Add to that the fact that eight of the games are on the road, including a three-game trip to California, and securing a playoff berth will be a challenge.