The Peerless Prognosticator is ON THE AIR!!! -- Game 16: Flames at Capitals, November 13th

The Washington Capitals return home from their two-game road trip to Detroit and Philadelphia to take on the Calgary Flames at Verizon Center on Friday night.  In an odd twist of the schedule, the Flames are the first team that the Caps will be facing for a second time this season.  Washington won the first meeting in Calgary by a 6-2 margin on October 20th.

For the Capitals, not a lot has changed since that first meeting.  They were 3-1-0 before taking on the Flames the first time, and since that win they are 6-3-0 going into their game against Philadelphia on Thursday night.  The goal scorers in that game – Nicklas Backsrom (2), Alex Ovechkin, Jason Chimera, Andre Burakovsky, and T.J. Oshie – represent the top-end and secondary scoring of a sort the Caps need to be successful.

Meanwhile, the Flames are showing some signs of coming out of a slow start.  After dropping nine of their first 11 decisions to open the season (2-8-1), the Flames are 3-2-0 in their last five contests going into their game against the Tampa Bay Lightning on Thursday night.

In those five games, the Flames outscored their opponents by a 18-17 margin, three of the decisions coming by one goal (a win, a loss, and a win in overtime).  The Flames are led in scoring over this five-game stretch by Michael Frolik (3-3-6), who had a hat trick in the Flames’ 5-4 win over the Edmonton Oilers that kicked off this five-game run.  That hat trick was a quite odd occurrence for Frolik.  It was the only game in which he has scored a goal this season.  It was his first multi-goal game since Opening Night of the 2013-2014 season (also against Edmonton), and it was the first hat trick of his eight-year career.  He has had some success against the Caps, going 6-7-13, minus-5, in 22 career games against Washington.

Johnny Gaudreau also has three goals in this 3-2-0 stretch for Calgary. Two of them came in a 5-2 win over the Pittsburgh Penguins on November 7th.  With four goals in 16 games, Gaudreau is a bit behind his goal scoring pace of last year (24 in 80 games), but with a 4-13-17 scoring line in 16 games he is well ahead of his rookie season points pace (24-40-64 in 80 games).  It might not come as much surprise that Gaudreau is officially the lightest of 685 players to have dressed for an NHL team this season at 157 pounds.  This will be his fourth game facing the Caps, and he is 0-2-2, even in his first three career games against them.

Mark Giordano leads the Calgary defense in goals (4) and is tied with Dennis Wideman in points (6), but he has just one point (a goal) in the last five games.  In fact, since recording two goals (including the game-winner) and an assist in a 3-2 overtime win against the Detroit Red Wings on October 23rd, Giordano has only two points in his last nine contests.  He is 2-3-5, plus-1, in seven career games against Washington. 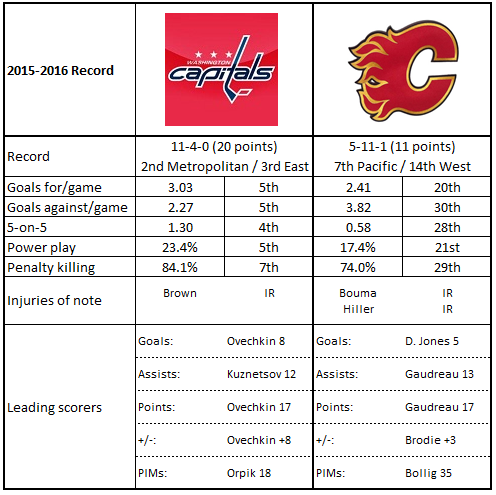 2.  Calgary is not especially good at the little things, either, at least as far as taking faceoffs is concerned.  Their 48.2 percent winning percentage is 28th in the league.

4.  As one might expect, when the Flames lose, they don’t make it suspenseful.  Their seven losses by three or more goals is worst in the league.

5. Calgary’s 5-on-5 possession numbers are not bad overall – 48.7 percent Corsi-for at 5-on-5.  And it does not get appreciably worse in close score situations – 48.0, 23rd in the league.  It seems to come back to their goaltending (numbers from war-on-ice.com).

1.  For those who aren’t concerned about 15 games being too early to draw historical comparisons, the Caps are on a pace to finish with 120 standings points.  Compare that to the 2009-2010 franchise record-setting team that finished with 121 poiints.

4.  By this time in 2009-2010 the Caps already had two losing streaks of at least three games.  This team has yet to lose consecutive games.

Goaltender Karri Ramo has had an interesting season thus far.  He was pulled in the second period of the 6-2 loss to the Caps last month, was waived the following day, cleared waivers and was sent to Stockton in the AHL the next day, then was recalled by the Flames on October 29th.  Since then he has appeared in five games – all five games of this 3-2-0 run for the Flames – and has not really been the reason the Flames have a winning record in their last five contests.  Over those games he has a 3.21 goals against average and a .891 save percentage.  Ramo got the start last night against Tampa Bay; we'll see if he gets the nod tonight.  He is 1-5-2, 3.40, .897 in nine career appearances against the Caps.

You are a 24-year old defenseman trying to climb your way into a regular spot in the lineup after two seasons of part-time play split with the AHL club.  You appeared in nine games so far this season, going into last night's game, and in all but one you have a Corsi-for percentage at 5-on-5 of 50 percent or better.  Seven times you were over 55 percent; five times you were at 60 percent or better.  There isn’t a single defenseman in the league with more than 100 5-on-5 minutes played with a better Corsi-for at fives.  Going into Thursday’s games you are the only one over 60 percent for the season (60.1).  Sure, you are getting third pair minutes with all that entails, but your team is 6-3-0 when you are in the lineup.  You are hardly a liability.  You are Nate Schmidt, and you are having a quiet coming out party in the early going this season.  In three career games against Calgary, Schmidt is 0-1-1, minus-2.

So, Calgary is 3-2-0 after a ghastly start to the season, but their wins are against Edmonton, Philadelphia, and at home against Pittsburgh on a night when the Penguins were playing the back half of a back-to-back set of games.  Their losses were at Colorado and at Florida.  It hasn’t exactly been a Murderer’s Row the Flames faced.  They are moving up a couple of weight classes against a club that wants to re-establish momentum.”  And, the Caps are much deeper and skilled, well, everywhere.  A 6-2 decision might not be in the offing, but the Caps will be able to see it from the result of this game.

The Washington Capitals power play provided a much-needed jolt of offense, even if it came from an unexpected source, leading the Caps to a 5-2 win over the Philadelphia Flyers on Thursday night in Philadelphia.

It was Jason Chimera putting the “power” in the Caps’ power play, scoring a pair of man-advantage goals in the second period. The first came with the Flyers holding a 2-1 lead mid-way through the period. It was the result of some deft hand-eye work by Chimera and Evgeny Kuznetsov. From just inside the Flyers’ blue line, Justin Williams threw the puck across the ice to Kuznetsov entering the offensive zone. Kuznetsov managed to get his stick on an uncooperative puck, one timing the feed into a bloop pass that floated over the sticks of a pair of Flyers defenders to Chimera heading to the net. Chimera whacked the puck as it was falling out of the air past goalie Steve Mason, and the game was tied.

Williams got a goal of his own less than two minutes later when he looped around a clot of players at the top of the Flyer crease and beast Nick Schultz to a loose puck, snapping it past Mason’s left pad to make it 3-2.

Then it was Chimera again on a power play. Late in the second period, Chimera took a drop pass from Tom Wilson in the right wing circle, sent the puck back to Matt Niskanen at the right point, then headed for the slot. Niskanen fired, and Chimera got enough of the puck sailing through to redirect it past Mason and make the score 4-2 heading into the second intermission.

Nicklas Backstrom ended the scoring in the third period, but it was hard work by Tom Wilson that started the scoring play. Chris VendeVelde played the puck behind his own net to his partner, Evgeny Medvedev. The puck got caught for a moment in Medvedev’s skates, and it was enough for Wilson to pounce. He checked Medvedev off the puck and fed it in front to Marcus Johansson skating down the middle. Johansson slid the puck over to Backstrom at the inside edge of the right wing circle, and Backstrom one-timed the puck past Mason for the final 5-2 margin.

-- T.J. Oshie snapped a five-game streak without a goal when he scored in the first period. He was the beneficiary of another instance of Evgeny Kuznetsov circling around the opponent’s net and back passing to the trailing player. This time, Kuznetsov sent a pass from his forehand back through the legs of defenseman Michael Del Zotto to Oshie filling in the space Kuznetsov left.

-- Kuznetsov had a pair of assists, his first two assist game since recording a pair against Edmonton on October 23rd. He has four assists in his last four games.

-- The record will have to wait another game. In his pursuit of the record for most goals scored by a Russian-born player, Alex Ovechkin was held to a pair of shots on goal and just three shot attempts.

-- Beagle also won 12 of 16 faceoffs and had an assist. If there was still a hard hat award, he might have earned it. By the way, just what is that post-game award the Caps are using this season?

-- Jason Chimera added an assist to his two power play goals, making it his first three-point game since April 10, 2014, at Carolina.

-- The two power play goals for the Caps was the first time they scored more than one in a contest since their 7-4 win at Edmonton on October 23rd.

There are few more pleasurable outcomes in a Caps game than beating the Flyers in Philadelphia.  Not that this Flyers team is good; they’re not (now 1-6-2 in their last nine games).  And Caps fans might take a little extra pleasure in having the Caps kick a bitter rival when they are down, especially after the Flyers had their way with the Caps last season.  But this was just another instance of shrugging off a frustrating loss a couple of nights earlier and taking care of business.  Through 14 games, the Caps do not have the look of the Ferrari that they were in 2009-2010 when they lit up the scoreboard regularly.  This club is more of an earth-mover, grinding up and disposing of whatever is in their path, ruthlessly and relentlessly.  Frankly, when they play like this, it is a pleasure to watch.