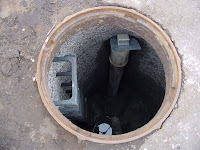 Sisyphus had to be a Caps fan.

No, Cheerless… Sisyphus.  Way back in olden times…

Uh, yeah… back in olden times, as the story goes, there was this king who was, to put it mildly, not a nice guy.  The Greek gods punished him by having him roll a huge boulder up a hill, only to watch it roll back down.  He would have to go down, get the boulder, and roll it back up the hill.  He would have to repeat this forever.

And then there are the Washington Capitals.  For the fourth time in 11 games the Caps took a lead, this time getting a goal just four minutes into their game with the Pittsburgh Penguins.  They took that 1-0 lead into the locker room at the first intermission, only the second time they led after 20 minutes this season.

Oh, did they lose.

Pittsburgh scored five goals in less than 13 minutes in the second period to swat the Capitals off Consol Energy Center ice as if they were a fly on the sleeve of their jersey.  By the time Alex Ovechkin got a power play goal with less than 12 minutes left in the contest, the matter had long been settled.  Another loss in what is now pretty much a lost season.

-- It sure looked good early.  The Caps held the Penguins to five inconsequential even strength shots in the first period, only one in the last 12:47 of the frame.  And on the Caps’ goal, there was some good work behind the net by Alex Ovechkin to chip the puck free of Brandon Sutter, then to get the puck out in front to Tomas Kundratek for the original shot that Mike Ribeiro followed up on for the goal.  Although Ovechkin and Kundratek got assists, one would like to have awarded one to Brooks Orpik for blading Marc-Andre Fleury’s mask off his head as if he was popping the top off a beer bottle just before Ribeiro scored.

-- That power play goal in the third period makes three power play goals for Ovechkin, none at even strength.  At least he is tied for seventh in the league in power play goals.  The truth is, though, even though every loss is going to be hanged around his neck, he wasn’t the problem last night.  He was shooting, hitting, making a ruckus.  He looked like Alex Ovechkin.  But outside of Mike Ribeiro, the Caps are getting next to nothing from anyone else.

-- And speaking about that power play.  Fine, the Caps are breezing along at 21.4 percent, 4-for-9 over their last three games.  Big deal.  In those last three games, three of the four power play goals came in the third period, and all of them came with the Caps down by two or more goals.  Power play goals are nice, but if you have already dug yourself a nice hole, it’s window dressing.

-- If someone had asked last month, “what will the Caps’ biggest problem coming out of the lockout be?," we would have bet “goaltending” would not have showed up among the top ten responses.  But there it is.  The Caps are just not getting competent goaltending when what the team desperately needs for their goalie to steal a game.  Michal Neuvirth and Braden Holtby rank 30th and 42nd, respectively, out of 43 qualifying goaltenders in goals against average.  They are 34th and 41st, respectively, in save percentage.  Neither improved on their standing last night as both were uniformly poor in goal.

-- More on that… we understand that a goaltender isn’t going to have much of a chance on a shot batted out of mid-air by a guy your defenseman lost (and how John Carlson loses track of where Sidney Crosby is on that play is mind-boggling; he was the only Penguin on that side of the ice and was allowed to stroll right to the net, nice as you please, to swat the puck in), but Neuvirth had time and space to make himself large on Evgeni Malkin’s goal but succeeded only in standing there like a shooting buddy you drape over a net with a bunch of holes in it.  And Holtby barely flinched on the Matt Cooke goal coming off a faceoff.  If the Caps are going to improve in their performance, it is going to have to start from the net out.  And right now, they’re not getting what they need.

-- Broken record… 8-for-19 in the offensive zone on faceoffs.  If you want to put pressure on a team, letting them have the puck to start play in the attacking zone isn’t a way to do it.  By the way, the Penguins scored two goals within ten seconds of a faceoff win twice last night.

-- The Caps had 13 even strength shots on goal in the first 43:25 of the game.  They had only 23 shot attempts in the first two periods (14 on goal).  You have to ask yourself, at what point do the training wheels come off on learning how to ride this bike of a system, and we just realize that this team just is not very good?

--  Since scoring his (still, although now tied with Mike Ribeiro) team-leading fourth goal of the season in Game 7 against Toronto, Joel Ward has a total of four shots on goal in four games (one in each), including last night.  It is starting to look a bit too much like last season in which he had four goals through his first 12 games, then went his next 25 games without one.

-- Players we associate with being third and fourth liners… Ward, Matt Hendricks, Joey Crabb, Jason Chimera, Jay Beagle, Eric Fehr… seven shots on goal last night (Fehr had three of them).  As a group they have seven goals (Ward with those four), none in the last four games.  The Caps are not getting any offense from anywhere, even by accident (except that Ribeiro fellow and the anonymous Nicklas Backstrom assists).

-- Three power play goals allowed?  Folks, the Penguins came into this game 1-for-11 on home ice on the power play.  Yeah, they’re not that bad, but three goals in four chances??  That was the sixth time in 11 games that the Caps have allowed two or more power play goals.  Only three times have they killed off all the shorthanded situations they faced (not coincidentally, they are 2-1-0 in those games).

In the end, the Caps are what they are.  They are not so much an opponent for teams as an annoyance.  They can’t score, can’t defend, and can’t stop pucks.  They score on the power play, but only when it doesn’t matter anymore.  Their only thing their penalty killing kills is any chance to win.  Their average goal margin in games is a staggering -1.46, by far the worst in the league.  Here is how bad that last number is.  Columbus is 29th in goal margin at -1.18 goals/game.

Your Washington Capitals... they make Wizards fans feel good about themselves.