The Washington Capitals spent their first game of the new year replaying 2013 in many respects.  It did not end as Caps fans might have hoped as the Carolina Hurricanes gave up a lead twice, fell behind once, tied the game, then won in overtime at Verizon Center, 4-3.

For the Caps it was another case of “why can’t we have nice things?”  With the Hurricanes holding a 1-0 lead, thanks to a first period goal from Jeff Skinner, the Caps scored in the first minute of the second period when Marcus Johansson chipped the puck from off the wall in the defensive zone over the Capitals blue line into the neutral zone.

Alex Ovechkin picked up the puck there and did the rest.  He skated through the middle with Carolina defenseman Ron Hainsey backing off, but trying not to do so too far.  As Ovechkin crossed the Carolina blue line he snapped a shot that Hainsey got a piece of with the blade of his stick.  It was not enough, though.  The puck changed direction, eluding goalie Anton Khudobin but hitting the left post and bending in to tie the game.

Just 55 seconds later the Hurricanes had the lead back, courtesy of Many Malhotra calling his own number while leading a 2-on-1 rush on goalie Philipp Grubauer.  Malhotra waited on defenseman Dmitry Orlov to go down into a slide to prevent…something, then roofed the puck over Grubauer’s glove.  Another goal allowed on a shift after a Capitals goal.

Troy Brouwer got it back only 78 seconds after that.  Marcus Johansson got it started when he shrugged off Brett Sutter behind the Carolina net.  It freed Johansson to make a feed in front for a one-timer by Nicklas Backstrom that Khudobin blocked.  He could not control the rebound, though, and Brouwer snapped it into the back of the net to tie the game once more at two apiece.

The Caps took a lead 52 seconds later.  It looked quite harmless enough, but those are the ones that sneak up on you.  It was not quite as simple as it might have looked live.  It started with a faceoff win by Jay Beagle against Manny Malhotra.  That was unusual in itself, since Malhotra is fourth in the NHL in faceoff winning percentage (59.5 percent entering the game).  The puck came back to Steve Oleksy, who skated it up along the right wing wall, then into the corner, then around the back of the net – nowhere a Hurricane in sight to challenge him.

Then Oleksy popped out on the other side to Khudobin’s left.  While this was going on, Ron Hainsey was guarding the top of the crease in front of Khudobin, but he was wiped out with a cleverly placed cross check by Brooks Laich, sending Hainsey to his knees in the blue paint.  At that moment, Oleksy let fly with a shot from the bottom of the left wing circle.  Khudobin was in his butterfly, and so was Hainsey, for that matter.  Both Hurricanes put up their glove hand – Khudobin’s left, Hainsey’s right… 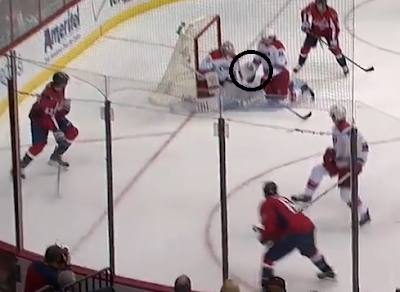 One of them appeared to get a piece of it, just enough to redirect it into the net and a 3-2 Caps lead.

Ah, but this is why we can’t have nice things.  Just 40 seconds later, Jeff Skinner notched his second goal of the game when Philipp Grubauer was handcuffed by a shot by Ryan Murphy, the puck popping into the air and into the low slot.  Skinner beat two Caps to the puck and wristed it past Grubauer to tie the game once more.  One last time.

That did it for the scoring in regulation, the teams obviously worn out from their five goals in 3:45 flurry early in the second period.  However, in the second minute of overtime, the Caps had a brain cramp.  With the teams playing 4-on-4 in the extra session, Alex Ovechkin had the idea of sending a back pass from the right wing boards through the middle to Dmitry Orlov skating in from the left side.  It never reached its intended target.  Ryan Murphy got a stick on the puck and deflected it to Manny Malhotra, who immediately returned it to Murphy heading out of the defensive zone.  Jeff Skinner joined Murphy and Malhotra to make it a 3-on-1 with only Mike Green back for the Caps.  Green could not interrupt Murphy’s pass to Skinner, and all that was left was a tip-in to complete Skinner’s hat trick and win the game for the Hurricanes, 4-3.

-- Alex Ovechkin scored his 31st goal of the season to end a four-game streak without one. It had been his longest streak without a goal since going four games without one from February 26th through March 5th last season.  His 31st goal came in his 39th game of the season.  When he scored 65 goals in the 2007-2008 season he reached 31 goals in Game 42 of that season.

-- What was John Erskine doing as the pinching defenseman at the Carolina goal line, leaving Dmitry Orlov back as the only defenseman on the Malhotra-Bowman 2-on-1 that Malhotra finished?

-- Yes, it was unusual for Manny Malhotra to lose a defensive zone draw that led to the Oleksy goal.  But Jay Beagle is not a chump at draws, either.  He went into the game winning 56.8 percent of his draws (he did not qualify to be among the league leaders) and was five of six for the game.

-- Third periods and overtimes are not kind to the Caps in this regard.  This was the ninth time this season that the Caps entered the third period tied with their opponent.  The overtime loss sent their record to 3-4-2 when tied at the end of 40 minutes.  Gotta win those third periods.

-- All of a sudden the Caps can’t stop shooting the puck.  The 41 shots on goal make it 126 in their last three games.  Unfortunately, they have only five goals to show for it (4.0 percent shooting), and they have lost all three games (0-1-2).

-- Martin Erat has been having his troubles.  Some are the product of circumstance (low ice time, playing on non-scoring lines), some are of his own making.  Tonight, he experienced both.  He played only 9:40 and was on ice for two of the Hurricanes’ four goals. One stood out.  On the last game tying goal by Jeff Skinner, Eric Staal used Erat as a skating pylon, stepping around him at the Carolina blue line to start a rush up ice…

…then, after Grubauer made the initial save on a Ryan Murphy shot, the puck popped up, dropped to the ice, and bounced just past the left skate of Erat… 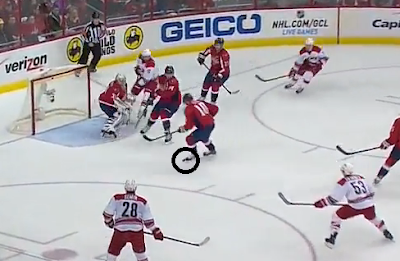 …it left Erat in the unenviable position of turning just as Jeff Skinner was sending the puck past Grubauer to tie the game... 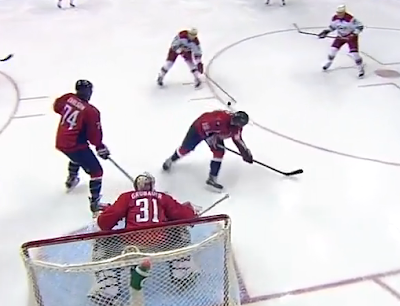 It has been that kind of season for Erat.

-- Philipp Grubauer has had an interesting ten days.  Five games, a 2.36 goals against average, a .923 save percentage.  You might think, yeah, he’s doing his job, keeping the Caps in games, getting rewarded with wins.  He is 1-2-2 in those five games, including last night’s overtime loss. The four goals allowed ties his season worst (11 games). He has not yet allowed more than three goals in regulation time this season.

-- One game does not fancystats make, but the lineup juggling was accompanied by pleasant possession numbers – 58.9 percent Corsi-for and 57.3 percent Fenwick-for percentages at 5-on-5.   That, however, does not do much for defensive lapses and brain cramps.

-- One power play.  Given the Caps modus operandi this season, relying on the power play for much of their offensive output, that is a recipe for pain.  They were unsuccessful on that lone man advantage.

-- Almost lost in that flurry of scoring in the second period was Alex Ovechkin getting a penalty shot.  Not his forte.  His attempt was poked away by Khudobin, making him 2-for-11 for his career.  However, Oleksy scored his goal just 14 seconds later.

If the Caps made any New Year’s resolutions about winning third periods or playing smarter or taking inferior opponents more seriously, consider those resolutions works in progress.  Sure, Jeff Skinner is hot, but the Caps let support players like Manny Malhotra and Ryan Murphy play important roles in the Carolina offense, too.  What made things worse was that this was one of those rare games in which the Caps had points from both Alex Ovechkin and Nicklas Backstrom, yet still lost.  The Caps are now 14-3-1 in games in which both record points, and it was only the second loss in the last 15 such games for the Caps (13-1-1).

It isn’t going to get easier for the Caps.  The Caps now head to Minnesota to face a Wild team that is 15-5-2 on home ice, then to Tampa Bay, sporting a 14-4-2 home record.  On top of that, Washington’s second-place margin in the Metropolitan Division has been cut to two points by the Philadelphia Flyers, and the Caps are only six points – a week’s worth of points – ahead of seventh-place Columbus.

Winter is supposed to be boring.  Well, maybe not.  Not for this team.

Posted by The Peerless at 5:57 AM No comments: