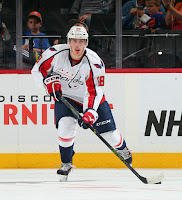 “Anyone who has a continuous smile on his face conceals a toughness that is almost frightening.”
-- Greta Garbo

Have you ever seen anyone smile so much?  The guy must have a bowl of “happy” every morning at breakfast.   There was reason for Schmidt to be happy about his 2015-2016 season.  In his third season with the Washington Capitals, the defenseman appeared in more games (72) than in his previous two years combined (68).  His assist total (14) doubled the total from his previous two seasons (7), and he set a career high in points (16).  His plus-12 ranked third among Capitals defensemen, and he was fourth in blocked shots (111).

His progression through his ten game segments looked like something of a bell curve.  Schmidt had a slow start with no points in his first ten game segment, but he improved to two points in each of his next two with a plus-1 followed by a plus-4.  He peaked in the fourth and fifth segments with four point in each and was a plus-10 over that span.  He slid back over his last three segments, finishing the season with one point and a minus-3 in the last segment of his season.

If there was a more consistent theme with Schmidt, it was outcomes in heavy minute situations.  When Schmidt logged at least 20 minutes of ice time, the Caps were 18-3-3.  However, what is odd about that nugget is that he did not reach the 20 minute mark in ice time in any of the last 23 games in which he played in the regular season. 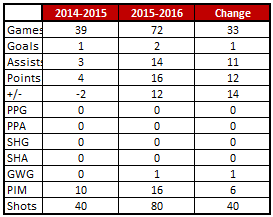 Fearless’ Take…  Among Caps defensemen logging at least 500 minutes of 5-on-5 ice time, Schmidt finished fourth overall in Corsi-for at 5-on-5 (50.6 percent) and was second in Corsi-for/Relative (plus-0.4; numbers from Corsica.Hockey).

Cheerless’ Take… Schmidt’s possession numbers – his 25-game rolling average Corsi-for at 5-on-5 – look like the Loch Ness Monster with this big hump in the middle (numbers from Corsica.Hockey)…

…and that rolling shots for has a wee bit of a wilt at the end, too…

These young guys, they have to learn to grind out that 82-game season.

Nate Schmidt recorded multi-point games twice this season, once against the Montreal Canadiens on December 26th and again against the New York Rangers two weeks later.  It was that second game that was one to remember for the circumstances of his points.  He recorded a primary assist on a goal by Justin Williams, springing the latter on a breakaway with a nifty lead pass from his own blue line to Williams breaking at the other blue line, to give the Caps a 2-0 lead…

The Rangers took the lead, 3-2, midway through the third period, but the Caps tied it with 5.7 second left in regulation on a goal by Nicklas Backstrom.  That left overtime for settling matters.  With the clock just under four minutes to go in the extra session, the Rangers won a faceoff in the Capitals’ end, and both Rick Nash and Derek Stepan had chances from in close.  Stick work by Schmidt helped keep the puck out of the net, and it squirted to Alex Ovechkin, who proceeded to execute and end-to-end rush that ended the contest…

Schmidt got credit for an assist on the play, giving him a pair for the game.

Schmidt’s stick got him in trouble early in this game.  Less than a minute into the contest he tried to poke the puck off the stick of Tom Kuhnackl while backing up and had the effect of merely waving at the biscuit.  Kuhnackl found Matt Cullen darting behind Schmidt, and Cullen beat goalie Braden Holtby for an early 1-0 Pens lead.  With Pittsburgh holding a 2-0 lead midway through the second period, Schmidt and his stick were victimized again, trying to swipe the puck away from Oskar Sundqvist as he was feeding the puck across to Conor Sheary.  Schmidt missed, the pass was completed, and Sheary gave the Pens a 3-0 lead nine minutes into the period.  Washington mounted a furious comeback to tie the game, but the Penguins won in overtime on a goal by Sidney Crosby.  Schmidt’s score sheet was forgettable – no shot attempts, a giveaway, and a blocked shot in just 9:36 of ice time, his lowest number of the season.

Like too many Capitals, Schmidt went silent in the offensive end in the postseason, posting a single assist in ten games, than coming in the “meltdown” game against the Flyers when the Caps scored five power play goals (Schmidt’s assist came on the last of those five man-advantage goals).  He managed only seven shots on goal in those ten games, and the outcomes when he was on the ice were not what was hoped for, his on-ice PDO being only 95.5 at 5-on-5.  Ice time was hard to come by as well.  A player who skated fewer than 15 minutes in only 12 of 72 regular season games, he skated more than 15 minutes only twice in ten postseason games, neither of them in the second round against the Penguins.

Although one looks at Schmidt and sees a young defenseman still on the upward arc of his development (we hope), he finished the season with 140 games in a Capitals sweater.  Odd as it might seem, that places him in 39th place in team history in games played by a defenseman.  He is one of just 22 defensemen in Caps history to play in at least 140 games for the club before his 24th birthday.  But one thing that lingers after the season just completed is the degree to which his numbers faded down the stretch.

It is here that we point out that the 82 regular season and playoff games Schmidt played this season was the most he played in a season since he dressed for 70 games with the Fargo Force in the USHL in 2009-2010.  As much as skill, the ability to endure the rigors of a long hockey season is part of development, and this is something (based on his results this season) that stands out as something Schmidt needs to demonstrate an ability to do.  When he does, perhaps that smile will conceal a toughness that is almost frightening.