The Washington Capitals prepared an early Thanksgiving feast for their fans, disposing of the Ottawa Senators, 5-2, in a solid effort from 18 skaters and Braden Holtby in goal over 60 minutes in the sort of game that provides a look at how good this team might be.

An evenly fought first period broke the Capitals’ way late.  In the last five minutes of the frame, Washington scored twice.  Jakub Vrana got the Caps on the board when he camped out in front of the Ottawa net and waited patiently for a pinballing puck that came to him at the top of the crease off a shot from T.J. Oshie that Evgeny Kuznetsov followed up.  Vrana finished up the play, batting the loose puck past GOALE Craig Anderson’s left pad to make it 1-0, 15:21 into the period.

The Caps doubled their lead in the dying seconds of the period when Alex Ovechkin got behind the Senators’ defense to roof a shot over the blocker of Anderson, off the crossbar, and in with 5.0 seconds left in the period to make it 2-0 heading into the first intermission.

The teams finished the period with 11 shots apiece, the Caps enjoying a 24-17 edge in shot attempts.

The Caps doubled their lead with a pair of goals 2:14 apart early in the second period.  The first came on a power play when T.J. Oshie backhanded a loose puck from the slot to Evgeny Kuznetsov in the right wing circle.  With time a space to pick his spot, Kuznetsov wristed the puck hard to the blocker side and past Anderson at the 7:41 mark to make it a 3-0 game.

Dmitry Orlov started the next scoring play with a deft backhand pass to Kuznetsov circling up ice from his own zone. Kuznetsov skated the puck into the Ottawa zone and fed it to Jakub Vrana on his left.  Vrana stepped up and snapped a shot that seemed to surprise Anderson and surprised the rest of the crowd in Capital One Arena when it snuck under the crossbar and wedged under the water bottle in the top of the cage to make it 4-0, 9:55 into the period.

Ottawa got on the board late in the period when Ryan Dzingel found some empty space between the hash marks, took a pass from Alex Burrows, and beat Braden Holtby to break the shutout at the 16:37 mark.

The Caps were happy, it seemed, to play back and forth with the Senators over the first half of the period, but Ottawa narrowed the lead with under eight minutes left.  Mark Stone banked the puck off the skirt of the net to Holtby’s left, and Mike Hoffman converted the opportunity by snapping the puck past Holtby at the 12:46 mark to make it 4-2.

Ottawa could get no closer, though.  Alex Chaisson got his third goal of the season late, banking a shot off the side boards from his own zone and into an empty net to give the Caps their final 5-2 margin.

-- T.J. Oshie had a pair of assists for his 33rd multi-point game as a Capital, tenth since that same lockout year.

-- Jakub Vrana had his first two-goal game as a Capital. He also led the team in shots on goal with five.

-- Alex Chiasson had his first two-point game (1-1-2) as a Capital and his first since he had a goal and an assist with the Calgary Flames in a 5-2 win over San Jose last March 31st.

-- The five goals scored by the Caps was the first time they scored five or more on home ice since their home opener, a 6-1 win over Montreal on October 7th.

-- Matt Niskanen had the fours going in this game…four shot attempts (all blocked), four hits, and four giveaways.

-- Alex Ovechkin’s goal was his 572nd of his career, drawing him to within a goal of Mike Bossy for 21st all-time.

A good win, a solid win.  Especially against a team that seems to pride itself on frustrating opponents.  Getting a lead against such a team is important, and the Caps checked that box.  Just as important, they did not sit back and rest on an early lead.  It was an important symbolic win, as the Caps reached the Thanksgiving break in a playoff spot (second wild card, a tie-breaker behind Pittsburgh).  Teams outside that mix on the holiday historically have a tough time elbowing their way into the playoff mix.  But with almost three-fourths of the season left, there is much work left to do.  The job now is to put efforts like this together over longer stretches of games, starting with Tampa Bay on Friday.

And with that, we are off for a few days.  See you on the weekend.

When the Dark Clouds Won't Go Away 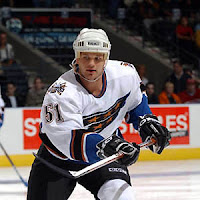 Competition is at the core of sport.  Whether against an opponent at an individual or a team level, or with oneself to be better than you were yesterday, competition is the engine that drives sport.  Hockey is no exception in that sense, but it is in another, perhaps perverse sense.  Hockey tolerates behavior that would otherwise, outside the arena of competition, be considered inappropriate at best and criminal at worst – fighting.  Oh sure, the rules provide penalties, and there is even a “code” attached to it, but fighting is part of what seems to make hockey, “hockey,” in the minds of fans and the history of the sport.

For those who practice it, fighting in hockey is the hardest, most thankless, most unforgiving job in sports.  Need an example?  The New York Times published a story on Tuesday that chronicled the experience of Walter Peat and his son, Stephen, who played with the Washington Capitals for four seasons a decade ago.  It is a difficult story to read.

For those who did not see Peat in action with the Capitals, he came to the club by way of a trade with the Anaheim Ducks in June 2000.  After missing most of the next season with a groin injury, he debuted with the Caps in the 2001-2002 season and became a fan favorite in short order for his willingness to drop the gloves.  In his first game with the Caps, on October 8, 2001, against the Boston Bruins, he was in two fights, the latter of them a harbinger of things to come.  At the end of that contest, a 4-0 shutout for the Bruins, Peat and P.J. Stock went at it.  It would not be their last meeting.

On January 5th of that same season, Peat and Stock went at it again.  The fight was remarkable for its ferocity, but also for the commentary.  As the ESPN feed put it at the time, “This is one of the best hockey fights we have seen in a long time…punch after punch.  You’ve to be able to take one to give one, and they are…”

Peat certainly took them to give them.  In 423 regular season and playoff games from 1996-1997 through 2006-2007, from junior hockey through the NHL, Peat was in 88 fights in 423 games (numbers from hockey-reference.com and hockeyfights.com).  Whether Peat’s troubles since leaving the game are the product of this physical trauma or not, it is a painful, even cruel way to make one’s way in one’s profession, one that has potentially catastrophic consequences.

Stephen Peat is but the latest example of the toll that playing the role of enforcer takes on one’s life after the skates are hung up for good.  Derek Boogaard, Bob Probert, and Steve Montador are some of the noteworthy examples of the price a player might pay.  Ken Dryden has an excellent book on Montador (from which the title of this blog entry is taken) that is well worth the investment to read.

While fighting has diminished as a feature of NHL games over the years, the specific role of an “enforcer” becoming uncommon these days, it does remain a part of the sport with its cadre of fans and supporters. One looks at the practitioners of the art today (for instance, Tom Wilson, with 78 fights in 523 games from the same sources cited above) and wonder what waits in store for them.  Here is hoping Stephen and Walter Peat find the help they need (fans can help here) and the peace they deserve, and that those players still skating today and their families never experience that same torment.
Posted by The Peerless at 8:57 AM No comments: