Washington Capitals -- That Was The Week That Was: Week 11

Week 11 was the best week of the season thus far for the Washington Capitals. For the Caps to finish the week where they did, it had to be.  It came just in time… 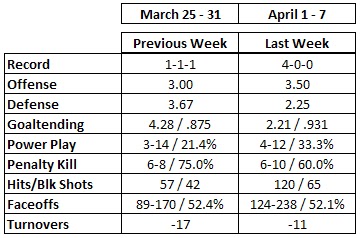 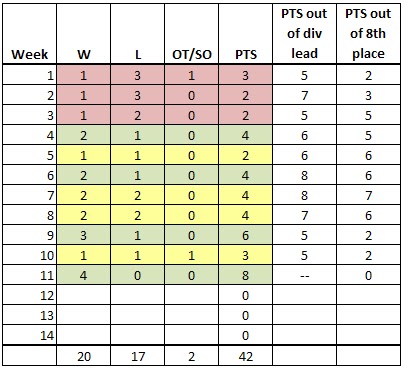 It was the first perfect record of the season for the Caps, a reflection of the club skating to its first four-game winning streak of the season.  Less than a week ago we asked if the Caps would run out of time in their chase for a playoff spot.  This week we might ask if they can be caught.  Obviously, the answer to the former question is, “no,” since the Caps now occupy the top spot in the Southeast Division and the automatic top three-seed that goes with it.  But before anyone concludes that the answer to the latter is also “no,” remember that this week’s 4-0-0 record was achieved largely at the Southeast Division’s expense.  The Caps beat Carolina, Florida, and Tampa Bay along the way, with the New York Islanders offering a bit of spice from outside the division.  And that game against New York – against what is now just the number-three team in the Atlantic Division – went to the freestyle competition to decide a winner.

It was like a buddy movie this week.  The quiet, deliberate playmaker from Sweden and the brash, demonstrative whirlwind from Russia. Sort of a European version of “Lethal Weapon.”  Certainly, Nicklas Backstrom and Alex Ovechkin were lethal to opponents this week.  Ovechkin finished 7-2-9 in the four games, while Backstrom was 0-9-9.  The only Ovechkin goal on which Backstrom did not assist was the empty netter Ovechkin scored to finish the week.  And there was Mike Green, too.  His three-goal week vaulted him into a tie for second in goal-scoring among defensemen with eight, behind only Montreal’s P.K. Subban (10).  Marcus Johansson chipped in a pair of multi-point games on his way to a five-assist week.

The key number for the defense this week is this one: “five.”  The Caps allowed only five even strength goals for the week.  This has been an issue for the Caps from time to time this season; the team finished the week still only in a tie for 18th in fewest 5-on-5 goals allowed.  Part of that was allowing a respectable 6.75 even strength shots on goal in the first period of the four games.  That was a much better number that the average of 12.0 third period even strength shots allowed per game for the week.  Then again, the Caps took leads into the third period in each of the four games, so there is undoubtedly a score effect going on there.

The goaltending for the Caps was not so much brilliant as workmanlike, and that is meant as a compliment.  Braden Holtby got the call for the first three games of the week, making it 11 straight appearances for Holtby.  He was solid in the first periods of games, especially as the week went on. Overall he had 22 saves on 24 first period shots (.917), but he did stop the last 14 first period shots he faced after a shaky start against Carolina to open the week (two goals on ten shots).  A bit of a slip late in the game against Florida kept Holtby from having a fine week in third periods, too.  In his first two games he stopped 26 of 27 shots in the third period and in the one overtime (against the Islanders).  But he did allow three goals on the last 13 shots he faced in the 4-3 win over the Panthers.

Holtby got a break to end the week, Michal Neuvirth making his first appearance since being the goalie of record in a 4-1 loss to Boston on March 16th.  Neuvirth was solid against a good offensive team in the Tampa Bay Lightning, stopping 28 of 30 shots to earn his first win since beating Carolina, 3-2, on March 14th.

The week was a bit deceiving.  On the one hand, 33.3 percent conversion of power play opportunities reflects considerable effectiveness.  On the other hand, three of the four goals for the week came against the worst penalty killers in the league, the Florida Panthers.  Still, you take them where you can get them, and Florida happened to be on the schedule.  Good teams – and good power plays – take advantage of those opportunities to gorge at the all-you-can-score buffet.

One might have liked to see more shots on the power play, though.  The Caps were 4-for-16 in shooting in 19:49 of power play ice time, including a full five-minute power play against Florida in which they scored one goal on five shots.

“Achilles’ Heel” is probably an insufficiently large part of the anatomy to describe how weak the Caps’ penalty kill is.  This week the penalty killers (whose adeptness at “killing” seems to extend only to the Caps’ chances of winning games) allowed goals in three of the four games, including twice in games in which they allowed only two power plays (against Florida and Tampa Bay).  We have said before that the best chance for the Caps on the penalty kill is not to have to face shorthanded situations, but three times this week they faced only two such situations and still finished with only a 60.0 percent kill rate.  Four goals on 14 shots in 13:57 of total shorthanded ice time is not going to cut it down the road.

Maybe it was the fact that the Caps faced three Southeast Division teams this week, but 120 hits in four games reflects a certain enthusiasm (or generous scoring) that has not been always evident this season.  It more than doubled the previous week’s total (in one more game).

Part of this might be explained by scoring effects – the Caps were charged with double digit giveaways in their two home games for the week.  But being in double-digit minus territory for two straight weeks suggests that there might be some shoring up to be done, too.

It is hard to complain about a 4-0-0 week.  Oh sure, there will be some who say the Caps beat up three palookas in Carolina, Florida, and Tampa Bay.  Well, you can only play the team in front of you, not some theoretical contender that might put up a stiffer challenge.  Two points is two points, whether they come against Florida or against Montreal.  Speaking of the latter, the Caps will get to face the Habs twice in the next six games, not to mention playoff-eligible Toronto and Ottawa.  The Caps are about to move up a weight class or two in competition, making it a good thing that the Caps – the Southeast Division leading Caps – banked eight points this week.