The Peerless Prognosticator is ON THE AIR!!! -- Game 54: Jets at Capitals

The Washington Capitals have once more assumed their rightful place at the top of the Southeast Division, and now they embark on solidifying their gains from Tuesday’s 4-0 shutout of the Florida Panthers. They start down that path by hosting the Winnipeg Jets on Thursday. For the Caps it is a chance to add to their conference-leading record at home this season (19-7-1, 39 points, three points ahead of Boston and Toronto). That home record is what is keeping the Caps afloat in the playoff race, and one wonders what they have to do to keep those home fires burning, to ….

Professor. Just the man to tackle this thorny question of how the Caps can keep this home record humming and maybe find a way to take some of the magic on the road with them.

Well, the Caps haven’t figured it out yet. 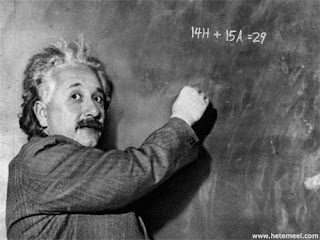 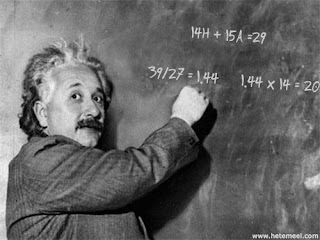 No, go on, Professor. 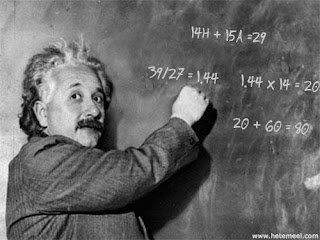 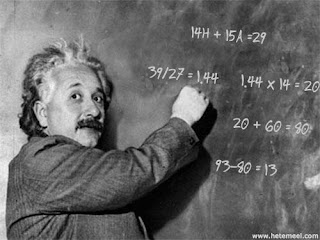 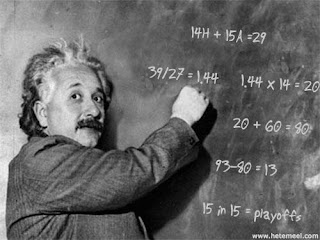 “Are you kiddink? Who do you zink taught Professor Brr-r-r-radley all he knows?”

The first order of business is taking care of the Winnipeg Jets. The Caps are 2-1-0 in the season series to date. In the lone game played at Verizon Center in the series, the Caps won a 4-3 overtime decision. It was a game in which the Caps surrendered one-goal leads three times before Jason Chimera ended it 1:52 into the extra session. Concerning more recent performance, the Jets come into this game having struggled with their 2012 portion of the schedule. Since January 1st the Jets are 6-10-1 and represent another instance of a team in the Southeast incapable of taking the division in a firm grip while their competition struggles.

One of the problems has been the absence of leading goal-scorer Evander Kane with a concussion for seven games. He returned to the ice on Tuesday in 2-1- win over Toronto, skating 13:44 without leaving a mark on the score sheet. In fact, Kane has not recorded a point since assisting on the game-winning overtime goal by Johhny Oduya in a 2-1 win over Buffalo on January 7th. He hasn’t scored a goal since he had the game-winner a 1-0 overtime win over Los Angeles on December 29th. Winnipeg’s struggles have gone hand in glove with Kane’s absence from the score sheet and the lineup.

Overall, the teams look like this so far this season: 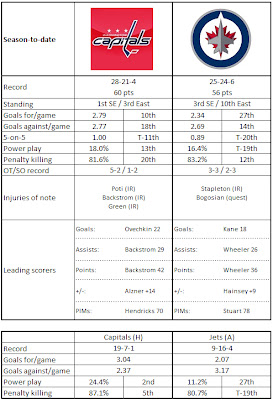 1. Shutouts follow the Jets around. Over their last 19 games the Jets have played in six games that ended in a shutout – two they won and four that they lost. The last time these teams met the game ended in – you guessed it – a shutout. The Caps rode a 26-save effort by Michal Neuvirth and a goal by Alex Ovechkin with 1:14 left to a 1-0 win in Winnipeg.

2. When the Jets lose, they don’t often lose close. Of the 24 losses Winnipeg has suffered in regulation, half of them have been by margins of at least three goals.

3. Winnipeg does the hard stuff on the road reasonably well. They are fourth in the league in hits recorded on the road, third in blocked shots, seventh in takeaways, and they have the fifth lowest number of giveaways.

2. The Caps are almost mirror images of themselves, home and road. At home they have outscored their opponents by an 82-64 margin, while on the road they have been outscored, 66-83.

5. In four of their last five home games the Caps have had but a single power play opportunity. They have had only 11 such opportunities in their last six games overall.

Remember Eric Fehr? In 230 games as a Capital, Fehr averaged 16 goals per 82 games played. Not elite, but given the ice time he received it was not a bad number. In 30 games with Winnipeg, Fehr has one goal (January 10th at Boston). He has one assist (November 29th against Ottawa). His 2.1 percent shooting percentage ranks in a tie for 617th among 840 skaters. He lives in the land of defensemen, that shooting percentage being equal to that of Jakub Kindl, Zbynek Michalek, and Sergei Gonchar, and just behind Milan Jurcina (2.2 percent). He has had to deal with another shoulder injury that had kept him out of 24 games, but this was not the way it was supposed to go upon his return to Manitoba.

So now he is a scorer. And not just a scorer, but a reliable one at the moment. Mathieu Perreault is 6-3-9, plus-6 over his last nine games, but almost as important is that he has points in six of those nine games. He is being rewarded with ice time (more than 13 minutes a game in these nine contests, compared to barely ten minutes per game for the full season). Three of those goals are game-winners. And he is doing it in economical fashion – six goals on a total of 18 shots (33.3 percent). One can only imagine what the Caps record would have been over those last nine games without that contribution; it was only 4-3-2 as it was. It indicates how badly the Caps need secondary scorers to step up in the absence of Nicklas Backstrom and Mike Green.

2. Isn’t that special? Nowhere is the home-road difference in Washington’s play more evident than on special teams. Second in home power play efficiency, fifth in home penalty killing efficiency. Conversely, Winnipeg is not an especially successful team on either side of special teams on the road. This difference must be exploited.

3. Sight lines. The Caps did a good job of providing a clean line of sight for goalie Tomas Vokoun to pick up shots in the 4-0 win over Florida. This is pretty basic and one of the rules of the NHL – if a goalie can see a shot, he’s going to stop it.

In the end, it is another chance for the Caps to put some distance between themselves and one of their closest pursuers for a playoff spot. This will be a little different in that the Caps are now the hunted, as the top team in the Southeast, and Winnipeg should have a heightened sense of desperation given that they are four points behind the Caps (Washington has two games in hand) and five out of eighth place in the East (with a game in hand on Ottawa). Complicating the matter for Washington is the fact that Jets’ goalie Ondrej Pavelec has turned away 216 of 224 shots (.964 save percentage) from the Caps over the last two seasons. It makes for an interesting contest.