The Peerless Prognosticator is ON THE AIR!!! -- Games 9 and 10: Bruins at Capitals, January 30/February 1

The Washington Capitals wrap up their first home stand of the season when the Boston Bruins come to town for a pair of games this Saturday and Monday at Capital One Arena.  The Caps will be looking to extend the eight-game points streak they have to open the season, while the Bruins will come to town sporting a four-game winning streak of their own.

On January 7th, with Zdeno Chara having moved to Washington, Bergeron added another honor to his list by being named the 20th player in Bruins history to be named team captain.  He has responded with points in five of his first seven games and making the Pennsylvania teams – Pittsburgh and Philadelphia – pay by way of a two-goal game against each in Bruins wins. Bergeron is one of the more consistent producers in the league posting ten 20 goal/50-point seasons in his last 11 years, the only missing season being the abbreviated 2012-2013 season.  With five goals and eight points in seven games so far, he is on a pace to make it 11 in 12 seasons.  And, his skill in the faceoff circle is unparalleled.  He finished above 55.0 percent in winning percentage in each of the last 11 seasons entering this one (most over that period; Jonathan Toews has ten), and he has won 64.1 percent of his draws in the early going this season.  Bergeron is 14-26-40, minus-10, in 49 career games against the Caps.

Bergeron has a nickname, “St. Patrice.”  Brad Marchand is the “Little Ball of Hate.”  Yeah, that sounds about right.  Does any player, perhaps short of the Caps’ Tom Wilson, inspired raw hatred as much as Brad Marchand?  If there is, it’s still a short list on which Marchand finds himself.  What makes is unsufferable for non-Bruins fans is that he is a really good player.  Only once in ten seasons preceding this one did he not reach the 20-goal mark (the abbreviated 2012-2013 season when he had 18 goals in 45 games), and he has topped 85 points in each of the last four seasons, one of only four players to do it (Connor McDavid and Nikita Kucherov are the others).

Marchand leads the team in points during their four-game winning streak (3-4-7) and leads the team in points through seven games (4-6-10), posting points in six of seven games to date.  He has been especially productive on the power play with two of the team’s eight power play goals and six points with the man advantage to lead the team.  He is also the only Bruin with two points while shorthanded (1-1-2).  And, whether he is practicing self-discipline or (to the consternation of his haters) has not been caught, he has only two penalty minutes so far.  This from a player who had at least 90 penalty minutes in three of the last six seasons and ranked tenth overall in penalty minutes over that span (507).  In 32 career games against Washington, Marchand is 8-12-20, minus-10.

Last season, goaltender Tuukka Rask posted a league-leading 2.12 goals against average and had his best save percentage (.929) since 2013-2014 (.930).  He added five shutouts to those numbers, resulting in his being named to the league’s second all-star team and finishing second in Vezina Trophy voting to Winnipeg’s Connor Hellebuyck.  This season, his goals against average is almost as impressive (2.13), but his save percentage has fallen significantly (.905), his worst since a three-game stint with the Bruins in 2007-2008 (.886), his first year in the league.  It is the difference between facing 29.7 shots per 60 minutes last season and facing 22.5 shots per 60 minutes in four games so far this season.  Although the population of games played is small, Rask has had an on-again/off-again quality to his game.  He opened the season stopping 20 of 22 shots in a 3-2 win over New Jersey, a .909 save percentage.  He followed that up with save percentages of .941, .846, and finally a .933 effort when he stopped 28 of 30 shots in a 3-2 win over Pittsburgh on Tuesday.  Boston has been alternating, for the most past, Rask and Jaroslav Halak in goal, and with Halak getting the win in Boston’s last game, a 4-1 victory over Pittsburgh on Thursday, Rask would seem to be the pick in DC on Saturday.  Rask was held out of Thursday’s win against the Penguins due to injury, but the plan was to bring him back on Saturday.  He brings a two-game winning streak against the Caps into the game after a career against them that featured only one win in his first 18 appearances against Washington.  He is 3-11-5, 3.10, .892, with two shutouts in 20 career games against the Caps. 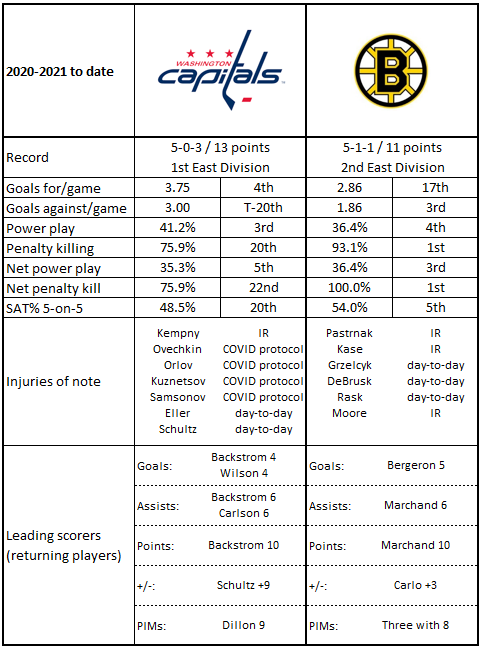 1.  Boston’s special teams index (power play plus penalty killing percentages) of 129.5 is second in the league (Dallas: 142.1 through Thursday’s games).

2.  The Bruins are winning faceoffs at a 59.1 percent rate, tops in the league.

3.  If the Bruins struggle, it is in 5-on-5 scoring.  Their nine goals in seven games is more than only three other teams – Calgary (eight in six games), Dallas (six in four games), and Carolina (four in four games).

4.  Boston has as many goals scored in the third periods an overtimes of games as they do combined over the first 40 minutes of games (ten).

5.  Of the 21 skaters to dress for the Bruins so far this season, 18 have points.  None of the three without a point (Connor Clifton, Ondrej Kase, and Par Lindholm) have played in more than two games.

1.  Washington’s 5-0-3 start is their longest streak of games with a point to open a season in team history.

4.  Leading after one period has not been kind to the Caps, who are 1-0-3 in such circumstances.

With Zdeno Chara having taken his hockey sticks to Washington, it would seem Charlie McAvoy is the number one defenseman for the Bruins now, and for the foreseeable future.  Truth be told, it might have been true last year as well, when McAvoy led the team in ice time (23:10 per game).  This season, McAvoy already has logged almost 35 more minutes in total ice time (175:34) than the next Bruins defenseman in line, Jeremy Lauzon (141:51).  McAvoy leads the club in even strength ice time per game (20:36), is second in power play ice time per game (2:01), and averages more than two minutes in penalty killing ice time (2:27).  He is one of only five defensemen in the league to average more than 20 minutes in even strength ice time and more than two minutes per game both on the power play and penalty kill (Ivan Provorov, Aaron Ekblad, Victor Hedman, and Brent Burns are the others).  After being blanked in points in his first four games of the season with a minus-3 rating, he is 0-5-5, plus-3, over his last three games.  McAvoy is 0-5-5, plus-2, in eight career games against the Caps.

It would be hard to find a player who throws himself, and his body, more enthusiastically into his job as a hockey player than T.J. Oshie.  His fearless, damn-the-torpedoes-full-speed-ahead style has made him a fan favorite since his arrival from St. Louis in 2015, and his versatility has made him an essential ingredient to Caps success on the ice since then.  It was on display again on Thursday, when an injury to Lars Eller and the COVID-related absence of Evgeny Kuznetsov pressed Oshie into service at center, a position he had not played since his days with the Blues.

It ended up being an odd game by Oshie standards.  First, he skated only 15:34, his lowest ice time of the young season to date, and his 10:34 in even strength ice time was on the low side for him.  He did have an assist on Tom Wilson’s empty net goal to seal the 6-3 win over the New York Islanders and finished with a plus-1 rating.  In the circle, he won two of eight faceoffs, and he was credited with a single hit.  It was a relatively quiet night by Oshie’s standards, but ultimately successful, given the circumstances that pressed him into pivot duty.  Nevertheless, Oshie is still tied for third on the team in points (2-5-7, with Tom Wilson) and is third in power play points (three, tied with Justin Schultz).  He has points in five of eight games so far on the schedule and brings points in consecutive games into Saturday’s contest against Boston.  Oshie is 7-5-12, plus-4, in 22 career games against the Bruins.

So, let’s pose the question.  The Caps have played eight games – one seventh – of their 2020-2021 schedule.  They have been without their top left wing, top center, a top-four defensemen, and their starting goalie for four games.  They lost another center to a game and change to injury.  Instead of Henrik Lundqvist taking over for the quarantined Ilya Samsonov in goal, the Caps have relied on Vitek Vanecek – a goalie with no NHL experience before this season – to dress for six of the eight games played to date.  You would think of 16 possible standings points, the Caps might have, what…nine? Ten? They have 13, a 91-point pace for this season.  Surely, they will not keep up this pace, but the points banked under adverse conditions over a large chunk of this season puts them in good position to maintain a playoff-eligible position in the standings and develop the depth they will need down the road this season.  And, if Thursday’s game signaled anything, it is don’t count this team out of any game.

Posted by The Peerless at 3:30 PM No comments: