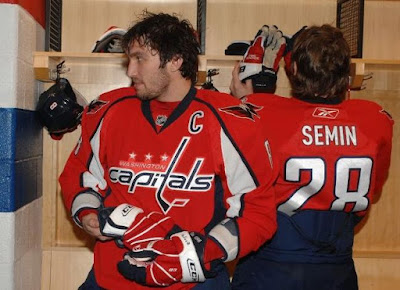 The Background: For the first time in the history of the Washington Capitals franchise, the team would take the ice with a European captain. Alex Ovechkin assumed the duties on this night, becoming the 14th captain in Capitals history, succeeding Chris Clark, who was traded to Columbus with defenseman Milan Jurcina for forward Jason Chimera.

The change came at one of the few difficult junctures for the Caps in the regular season. They went into the Montreal game having lost three in a row – an embarrassing 6-3 loss to the struggling Carolina Hurricanes, followed by a long-distance waste of a road trip that resulted in losses to the Sharks in San Jose (5-2) and the Kings in Los Angeles (2-1). It was to date – and would be for the season – their longest string of losses in regulation.

Why It Mattered: Lost in the transition at captain were two facts. First, the Caps were in the throes of a goaltending problem. Semyon Varlamov, who started the year going 12-1-2, 2.21, .924, with two shutouts, went on the shelf with an injury in early December. Jose Theodore missed two games for personal reasons in late November, and after coming back played in only seven of the next 17 games. Coming into the Montreal game, Michal Neuvirth had temporarily become the number one goaltender. He was making the most of the opportunity, too. Neuvirth played in five of six games leading up to the Montreal game, posting a 3-2-0 record, 2.41 GAA, and .917 save percentage. And that included a rough time of it in San Jose, where he allowed all five goals in the 5-2 loss. In the other four games he did not allow more than two goals.

In this one, the Caps made things a bit easier for Neuvirth, allowing the Canadiens only three shots on goal in the first period. Then early in the second they staked the rookie goaltender to a 1-0 lead on a power play goal by Tomas Fleischmann. Neuvirth stopped the first seven shots he faced in the second period, but yielded the tying goal on the eighth shot he saw, off a slap shot by Canadiens defenseman Josh Gorges.

The momentum didn’t last long on Montreal’s side of the ice, though. Eric Fehr put the Caps in the lead to stay less than two minutes after the Montreal goal, and Alexander Semin added a goal 36 seconds later. Benoit Pouliot got one back in the third period, but Neuvirth slammed the coffin lid shut on the Canadiens’ chances after that, stopping the last five shots he saw in the final 8:50. Semin drove the last nail into that coffin with a goal with just over two minutes left to provide the final 4-2 margin of victory.

Oh, you think we forgot about that second fact lost in Ovechkin’s assuming the captaincy. Well, maybe it was because it was a more subtle change. Brendan Morrison was in the midst of a four-game streak without a point and was 1-2-3, plus-1 in 12 games since going 1-2-3, plus-1 in a game (as in one game) against Florida on December 3rd. In this contest, the Caps decided to take Tomas Fleischmann on a test drive at center, inserting him into the pivot on the second line. He scored an unassisted power play goal and assisted on both of Alexander Semin’s goals, and he won six of nine faceoffs. For tonight, at least, things seemed to work.

The Takeaway: If you were writing the story, you might have written it where Alex Ovechkin gets the “C” on his sweater, gets a hat trick, and is named first star of the game (we'll leave the tire changing to Brooks Laich). Well, he got the “C.” But otherwise, Ovechkin had a quiet night – no points, even, three shots on goal. In fact, he was on the ice for only one goal for either club, the unassisted power play goal by Fleischmann in the second period. But his record as captain would hardly be quiet after this game. The Caps finished the season 30-4-7 with Ovechkin as captain. This win would, in fact, start Ovechkin and the Caps off on a 17-1-0 record over the next month.

And Neuvirth? He stopped 24 of 26 shots in this one and would be an important cog in the 17-1-0 run. In what would be his last action of the season, he suffered some from inconsistency, but in ten appearances in this stretch he was 6-0-0, with a 2.51 GAA and a .927 save percentage, establishing himself as a prospect to be reckoned with as the Capitals goaltending competition among Semyon Varlamov, Braden Hotlby, and Neuvirth moves forward.
Posted by The Peerless at 1:51 PM No comments: 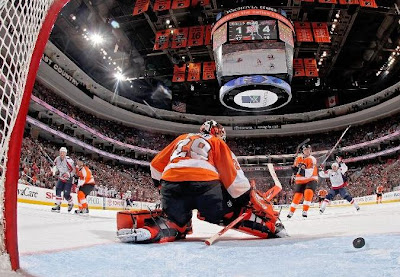 The Background: The Flyers were thought at the start of the season to be a contender for a berth in the Stanley Cup finals. Defenseman Chris Pronger was added in a draft-day trade (he later signed a seven-year contract extension), Ian Laperriere was added for some grit, and the Broad Streeters were returning the likes of Mike Richards, Jeff Carter, Simon Gagne, and Scott Hartnell, all of whom recorded at least 30 goals in the 2008-2009 season. Things looked good for the Flyers when they won their first three games of the season, including a wild 6-5 overtime win over the Capitals on October 6th, a game in which the lead changed hands five times.

The Flyers' fast start dissolved into a run of inconsistency, though. After the three-game winning streak to open the season, the Flyers then lost three in a row, won two, lost two, won seven of eight, then lost six of seven. The roller coaster ride cost head coach John Stevens (who was drafted as a defenseman by the Flyers in 1984) his job on December 4th. Enter Peter Laviolette, a former Stanley Cup winning head coach with the Carolina Hurricanes, who took over a team with a 13-11-1 record and a 10th place standing in the Eastern Conference.

The Caps, meanwhile, headed to Philadelphia on a four-game winning streak and a 3-0-2 record in their previous five road games.


Why It Mattered: It was entirely possible that the road to a Stanley Cup would go through Pennsylvania, and that did not necessarily mean Pittsburgh. The teams had split two games to date – that wild 6-5 overtime win for the Flyers in Philadelphia and a 4-2 win for the Caps in Washington in October 27th. In both of those games the first period ended scoreless.

Tomas Fleischmann scored 57 seconds into the game after Eric Fehr forced a turnover at the Flyers’ line, and Brendan Morrison picked up the puck, skated in, and fed Fleischmann coming down the left side to the right of Flyer goalie Ray Emery. The Flyers managed to tie the game on a goal by Mika Pyorala just over 12 minutes into the period, which might have provided some momentum for the home team.

But it was at that point that Daniel Carcillo decided to audition for an episode of “CSI: Philadelphia,” and not as one of the good guys. Carcillo, thinking no one in the crowd of 19,789 and four on-ice officials was looking, decided that a clean check from Matt Bradley required some retaliation. He cross-checked Bradley (two minutes), instigated a fight (four minutes), sucker-punched Bradley before the latter could get his gloves off (nine minutes… you running a tab on this?), was whistled for a ten-minute misconduct (19 minutes), and was given the rest of the night off with a game misconduct (29 minutes). The Flyers would skate the next nine minutes shorthanded, provided the Caps did not score.

The Caps made them pay instead. First, Fleischmann put the Caps out in front to stay at the 17 minute mark of the first period. That goal unleashed the deluge. Mike Green scored 20 seconds after Fleischmann to give the Caps a 3-1 lead at the first intermission. Brooks Laich scored in the first minute of the second period, giving the Caps three goals on the extended power play.

Not 21 minutes into the game, and the Caps had a 4-1 lead. They were on their way to rid their mouths of the bad taste of a 7-1 pasting they absorbed on this ice sheet almost exactly one year before. Which meant that the Caps weren’t done. In a space of 4:09 late in the second period they popped three pucks past starting goalie Ray Emery (who was relieved after allowing the first of them, scored by Chris Clark) and his relief, Brian Boucher. But for the exchange of a couple of third period window dressing goals by Scott Hartnell for the Flyers and a power play tally David Steckel for the Caps (with Hartnell in the box), the competitive portion of the evening was over before 40 minutes were in the books.

The Takeaway: It was not the most goals ever scored by a Capitals team against the Flyers (that would be ten goals in a 10-4 win against Philadelphia on November 21, 1981), but it was the most ever by a Caps team scored in Philadelphia. There were several odd items about this game. First, Alex Ovechkin was not in the lineup. He was serving the second game of a two-game suspension for knee-on-knee hit of Carolina’s Tim Gleason on November 30th. The Caps did not seem to miss him on this occasion. Also, with eight goals scored, one might expect a splattering of points up and down the score sheet. Not in this game. Six Caps had goals, 12 Caps recorded points. The flip side of that coin is that six Caps had multi-point games (Tom Poti, Tomas Fleischmann, Eric Fehr, Nicklas Backstrom, Alexander Semin, and Mike Green). Green had a four-point night (two goals, two assists), and Backstrom had a five-point night (one goal, four assists), tying a personal best for points in a single game. Along with the concentration of points was the concentration of shots on goal – only 12 Caps had at least one shot on goal (30 in total). But they were efficient. The eight goals on 30 shots was one thing (26.7 percent shooting percentage), but the Caps also had four goals on six power play shots.

Makes you want to scream at who is in the Stanley Cup finals, doesn’t it?
Posted by The Peerless at 11:32 AM No comments: