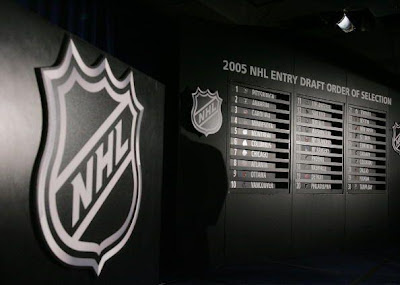 There has been considerable speculation over the likelihood that the Pittsburgh Penguins can keep their core group together as they come up for new contract deals. Players such as Evgeni Malkin, Marc-Andre Fleury, and Jordan Staal will be interesting decisions for the Penguin front office to ponder over the next 13 months or so (Malkin and Staal becoming RFAs after next season).
And, the Penguins took a roll of the dice in trading for Marian Hossa from Atlanta as possibly only a rental in an effort to bolster a Stanley Cup run that found them falling just short of the prize.
Well, now enter another factor -- draft position.
The NHL has the complete draft order up at NHL.com, and one thing that caught our eye was that the Penguins do not select until the 120th pick (4th round) in the upcoming entry draft -- by way of comparison, the Caps have six picks (23, 45, 57, 58, 84, 93) before Pittsburgh's first selection -- and only have four picks in the entire draft, absent any wheeling and dealing.
Add to this the fact that the Penguins moved last year's first round pick -- Angelo Esposito -- to Atlanta in the Hossa trade (along with this year's first-rounder and a couple of mid-20's players in Colby Armstrong and Erik Christensen), and the Penguins have a couple of years worth of holes at the top of the draft.
Of course, it is entirely possible that the Penguins will end up with gems in guys like Carl Sneep or Keven Veilleux (second round selections in 2006 and 2007, respectively), and they could pull off some deals in the next 10 days to improve their draft position. But with most -- if not all -- of their high-end prospects already on the Pittsburgh roster, they could have some gaps in their developmental pipeline with the moves made to go for the Cup this year. Maybe all the eggs weren't in the 2008 basket, but a fair number of them seem to have been there.
Ray Shero seems a very capable and talented executive, which will make what Pittsburgh does -- at the draft and as free agency season opens -- very interesting to watch.
Posted by The Peerless at 1:37 PM 2 comments:

This year's Vezina Trophy is another of those close competitions among three goalies who were the rocks upon which their clubs built successful seasons. As for the trophy itself...

"The Vezina Trophy is an annual award given to the goalkeeper adjudged to be the best at this position as voted by the general managers of all NHL clubs." 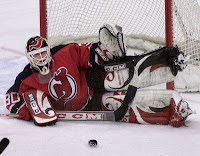 If there is an emerging theme in this year’s awards, it is that the finalists took different roads to earn a spot in the final three. The finalists for the Vezina certainly fit that description. Brodeur is a three-time winner and perennial contender for this award (he has been a finalist eight times). Lundqvist finds himself here for the third time in his three-year career – he has not yet won. Nabokov finds himself here for the first time in his eight seasons with San Jose.

Brodeur’s season – excellent in its own right – represents another in a career of sustained excellence:


What seems odd about Brodeur’s performance this year is his having started and – more important – finishing with diminishing returns as the season came to an end. In his first ten games, he was 4-6-0, 2.93, .887. If you play for a club with a high-powered offense, those GAA and SV numbers aren’t awful, but New Jersey isn’t a high-powered offense, and those numbers are most certainly not Brodeuresque. His next five 10-game splits, however, were (for the most part) a return to the form one would expect from him:


It was at that point that the wheels, if they weren’t coming off, weren’t getting the same traction. From that 2.02 GAA and .933 save percentage in his 51st-through-60th games, his GAA went up and his save percentage down in his next ten games (2.12, .926), and again in the seven games to finish the regular season (2.25, .914). By themselves, those numbers are hardly bad – it might impress some that we’re picking nits -- but compared to those 50 games in the middle of the season, they were a half-step back.

Like Brodeur, Nabokov played for a team that was at times offensively challenged (San Jose finished 19th in goals-per-game, New Jersey was 27th). Nabokov had little margin for error in many games, and he (like Brodeur) was expected to go just about every night.

One area in which Nabokov did not measure up to Brodeur (and it really…really pains us to say this) is in the Gimmick. Where Brodeur was 8-4 with a .744 save percentage, Nabokov was 6-6, .550.


Henrik Lundqvist makes his third consecutive appearance among the finalists for this award, and if anyone can say of a player playing in New York City that he had a season of quiet excellence, it would be Lundqvist. With the soap opera that accompanies sports in New York (“soap” being another term for “Jaromir Jagr” in this instance) swirling around him, he managed to finish with 37 wins (tied for fourth), a 2.23 GAA (6th), .912 save percentage (15th among goalies playing more than half of their teams’ games), more than 4,300 minutes (5th), and ten shutouts (1st…no small feat given Columbus’ Pascal Leclaire’s efforts in that area this year).


Looking at his season, Lundqvist started and finished fast, with a bit of a lull in-between. In his first 20 games, as the Rangers were struggling to score goals, Lundqvist still managed an 11-8-1 record. Only six times in that opening stretch did Lundavist allow more than two goals en route to a 1.79 GAA and .931 save percentage. In his last 22 games, he was 13-3-5 (with one no-decision), 1.92, .925.


For the season, Lundqvist posted or tied personal career highs in wins, shutouts, and goals-against average. And, he played for a more offense-challenged squad than did Nabokov (the Rangers were 25th in goals-per-game; San Jose 19th), and almost as challenged as New Jersey (27th).


Here is your fun Lundqvist fact – he finished dead last in the NHL in penalty shot save percentage (.333, with one save in three shots faced).


While Lundqvist is arguably, at this point in his career, the goalie one would want on the ice for one big game, he is probably a notch below Nabokov and Brodeur in this race. And while Nabokov raised his game considerably over his career performance to date, there is the smallest sliver of light separating his performance this year from that of Martin Brodeur. We went back and forth on this choice almost on a game to game basis over the last couple of months, but in the end, our choice for the Vezina would be…

Posted by The Peerless at 7:00 AM No comments: