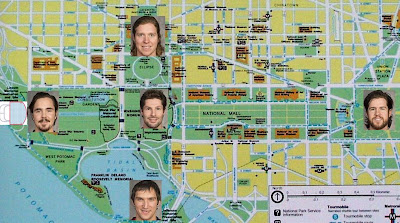 One of the benefits in having Adam Oates behind the Capitals' bench this season as head coach is his encyclopedic knowledge of the game and the possibilities he brings to resuscitating the Capitals' power play.  Mike Vogel and Japers' Rink have provided Caps fans with superb treatments on what lies in store with respect to that power play.

Essentially, the Caps are basing their man-advantage strategy on a "1-3-1" approach.  That's all well and good, but "1-3-1" sounds more like an area code (although there is no such code in the US).  We need something that has meaning to Washington Capital fans.

We bring you... "The National Mall" Power Play.

OK, Greenie, you set up at the U.S. Capitol where you have a clear line of sight to the slot and the crease.  Nicky, you set up at the White House.  We're counting on you to make a lot of "executive" decisions from over there, so keep your eyes open.  TB...you man the Washington Monument.  A lot of traffic comes through there, and I don't want you just sightseeing in there.  Stand tall.  Marjo... you get the Lincoln Memorial.  You've got to be sturdy as one of those columns for all the foot traffic you're going to get in there.  Ovie, you've got the Jefferson Memorial.  Declare your independence over there; don't be shy about firing the puck.

Edit... Will a Green-to-Ovechkin one-timer be called "The Maryland Avenue?"  Or Green-to-Backstrom the "Penn Ave Wrister?"  The possibilities!
Posted by The Peerless at 11:16 AM 1 comment: