The Peerless Prognosticator is ON THE AIR!!! -- Game 55: Red Wings at Capitals, February 9th

For the Washington Capitals, these are the best of times – regular season edition.  Winners of four straight, eight of their last ten, and with a record of 24-4-3 since December 5th and a ten-game winning streak on home ice, the Caps will host the Detroit Red Wings on Thursday night at Verizon Center looking to extend their good fortune another night.

The Caps’ record on home ice has been stunning.  In their ten-game winning streak, they have outscored their opponents by a combined 50-12, scoring five or more goals in each of their last nine games at Verizon Center.

The Red Wings, opening a three-game road trip, have been struggling in their quest to reach the postseason for the 26th consecutive season.  They bring a modest three-game points streak into this contest (2-0-1) having lost in overtime to the Columbus Blue Jackets on Tuesday night, 3-2.  It is one in a cruel stretch of games for the Wings, who have four overtime losses in their last eight games (2-2-4 overall).  Scoring has been an issue over those eight games for Detroit, having recorded a total of only 16 goals and being shut out twice, both times on home ice.

Henrik Zetterberg had a hand in almost half of those 16 goals, going 2-5-7 over that stretch.  Now the grand old man for the Wings – the oldest player to dress for the club this season and one of the last links to the last Stanley Cup winning team in 2008 – he is not going gently into that good night.  Zetterberg leads the team in assists (27), points (38), plus-minus (plus-13), and ice time among forwards (19:23 per game.  He is on a pace to record his third-straight 50-point season (59) and his tenth such season in a 14-year career, all in Detroit.  If he should appear in all of the Red Wings remaining games this season, he would finish the year with a round 1,000 NHL games played in his career, the seventh player to reach that milestone for the club.  In 18 career games against the Caps, Zetterberg is 6-6-12, minus-1.

With Niklas Kronwall – another link to that 2008 Stanley Cup winning team – on the shelf with an injury, Darren Helm is the third and last link on the current club to those glory days.  Helm is something of a survivor, or at least persistent.  He has played every one of his tens seasons with the Red Wings and is one of just 38 players in the history of the franchise to play at least ten seasons.  He is in the top-50 in total games played for the club (468).  It would be more but for having missed 28 games this season to a dislocated shoulder suffered in November that kept him out of the lineup until January 20th.  His role has been as a reliable bottom-six forward, a role in which he has enjoyed some success.  In six full seasons (he missed most of the 2012-2013 to injury) he has never finished with less than 20 points, and only in 2011-2012 did he finish with fewer than ten goals (9).  In his eight games back from his shoulder injury, coinciding with the 2-2-4 skid on which the Wings find themselves, he is 2-1-3, minus-2, and is on a pace to finish with 13 goals and 22 points.  Helm is 1-1-2, minus-4, in 12 career games against the Caps.

Goaltender Jimmy Howard suffered a knee injury in late December, and he has been on a rehab assignment in Grand Rapids with the Griffins in anticipation of his return to Detroit.  In the meantime, Petr Mrazek has had the number one netminding duties.  It is a role with which he has struggled.  Since taking over for Howard, Mrazek is 3-6-3, 3.21, .894, but he did have a 42-save shutout of the Nashville Predators last Saturday.  Mrazek is 1-2-1, 1.54, .944, with one shutout in four career appearances against the Caps. 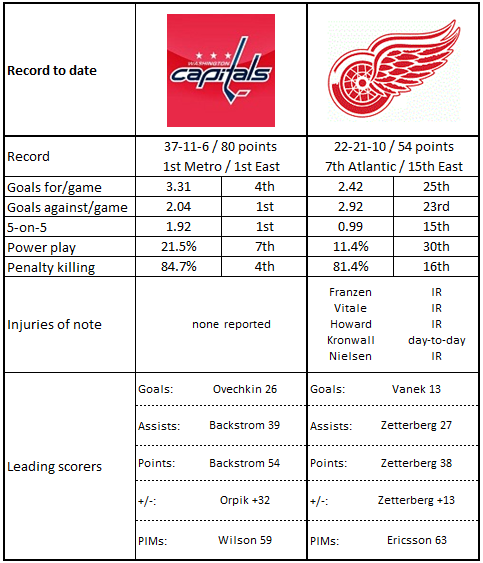 2.  Outshooting the opposition is hardly a guarantee of success for the Red Wings.  Their eight wins in 19 games when outshooting opponents is fewer wins than all but four other teams, all of whom are outside the playoff eligibility group (Dallas, Buffalo, Colorado, and Arizona).  Detroit has more wins when outshot by opponents (13) than they do when outshooting them.

3.  If the game is a blowout, chances are the Red Wings are on the wrong side of it.  Their .286 winning percentage in decisions of three or more goals (4-10 record) is the fifth-worst in the league.

5.  It should be no surprise that Detroit struggles with possession.  The Red Wings rank 23rd in Corsi-for at 5-on-5 (48.08 percent) overall and when adjusted for score, zone, and venue (47.78 percent; numbers from Corsica.hockey).

1.  Lars Eller became the tenth player this season to hit double digits in goals when he scored against Carolina on Tuesday night.  The Caps had only eight players hit that mark last season.  They did have ten players reach that mark in 2014-2015.  The last time they had more players hit that mark was 1993-1994, when 13 players had 10 or more goals.

2.  The Caps have been liberal in spreading ice time around.  Among the 12 forwards appearing in at least 40 games so far this season, only Daniel Winnik is averaging less than ten minutes at even strength (9:55), and no one has more than Evgeny Kuznetsov (14:32 per game).

3.  Among active defensemen, only six have more blocked shots in the post-2004-2005 lockout period than Brooks Orpik.  His next one will be his 1,500th in that span.

5.  For all the fireworks at home lately, the Caps have been struggling a bit in possession.  They rank 13th in Corsi-for at 5-on-5 on home ice (50.97 percent; numbers from Corsica.hockey).

He is not the offensive defenseman he was in his heyday with the Washington Capitals, but in his season and a half in Detroit, Mike Green is in the top-20 among league defensemen in total goals scored (17), top 15 in power play goals (7), top-25 in total power play points (27), and is in the top-30 in points overall (61).  He has been a bit of a good luck charm this season, the Wings sporting a 5-1-1 record in games in which Green recorded a goal.  It does not extend quite as far to when Green had a point, the Wings being 11-5-4 in those games.  As was the case when he was a Capital, Green has been a minutes-eater, but that has been a mixed blessing.  Detroit is just 8-11-4 in the 23 games in which Green skated more than 24 minutes.  Green does not have a point and is minus-1 in the four career games he has against the Caps.

In one respect it is tempting to think of Karl Alzner as the “above average” defenseman.  This season, he is averaging 20:03 in ice time per game.  In 27 games he skated more than that, the Caps are 23-1-3.  When skating less than that, the Caps are 14-10-3.  Perhaps is it the product of his role. Being a defensive defenseman, he’s going to be out there trying to protect a lead.  When the Caps are trying to catch up, he’s not going to get so much time.  He does have that secondary scoring thing going, though.  Washington has won all nine games in which he has a point this season.  Even though Alzner is to be an unrestricted free agent at the end of this season, he will finish this season in the top ten among defensemen in franchise history in games played.  His 563 games played in the NHL, all with the Caps, ranks tenth all time on the franchise list of defensemen.  Alzner is 0-3-3, plus-4, in 14 career games against Detroit.

Nine of the last ten games the Red Wings have played ended in one-goal decisions, and they are 4-1-4 in those games.  On the other hand, of the Caps’ last 17 games, 12 of them were multi-goal decisions of which the Caps won 11.  The key factor in whether this is the close game the Red Wings seem to favor at the moment or the blowout characterizing Caps games recently is whether Red Wing goalie Petr Mrazek (assuming he gets the nod) plays like he has against the Caps during his career or how he has played recently.  If the former, the Red Wings could surprise.  If the latter, well…

Posted by The Peerless at 7:53 PM No comments: