Washington Capitals: That Was The Week That Was -- Week 26

Most of the time, saving the best for last is a good thing.  In Week 26, the last week of the regular season, it might have been the Washington Capitals’ best week of the season, which only makes it tinged with sadness over a season wasted. 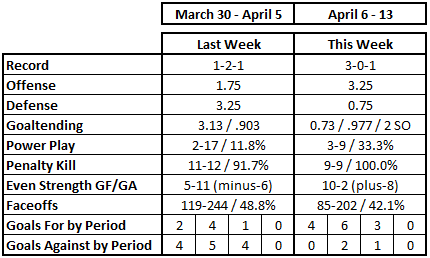 After going 1-3-2 in Weeks 24 and 25 to slip out of playoff contention, the Capitals ended the season with their second 3-0-1 record of the season and second in the span of four weeks.  What made it all the better, and all that much sadder, was the competition against which it was accomplished.  The Caps won games against playoff participants in the St. Louis Blues and Chicago Blackhawks, and they earned a standings point in the season finale with a shutout in a 1-0 Gimmick loss to the playoff-bound Tampa Bay Lightning.  The wins over the Blues and the Blackhawks allowed the Caps to finish the season over .500 against the Central Division (7-6-1) and with a fine record against the Western Conference (14-9-5).

With four or more goals in the first three games of the week the Caps extended a streak of four or more goals to four games, tying their longest such streak of the season (February 27 – March 5 in which they scored a total of 17 goals). Week 26 was the unexpected in terms of individual production.  There was Nicklas Backstrom leading the team with three goals.  There was Joel Ward leading the club with four assists.  There was Jay Beagle with his first NHL two-goal game.  The Caps spread things around with eight players sharing in the 13 goals for the week and 15 skaters recording points.  There were old reliables, though.  Alex Ovechkin tied for the team lead in points (five, with Ward) and notched his 50th and 51st goals of the season, the fifth time in his career he reached the 50-goal mark.

Three goals in 12 regulation periods plus an overtime ranks among the best defensive efforts of the season over a week’s span of games.  Or was it?  The possession statistics suggested something else.  Over the four games the Caps had a cumulative Corsi-for percentage of 39.8 in 5-on-5 close score situations and a Fenwick-for percentage of 41.8.  If anything, the even-strength numbers were worse – 37.2 and 38.8, respectively – although there might have been score effects influencing that result.  The poor possession numbers left the Caps finishing 24th in Corsi-for percentage and 25th in Fenwick-for percentage in 5-on-5 close situations for the season.

Well, they finished with a flair.  Braden Holtby and Jaroslav Halak stopped 130 of 133 shots in Week 26.  For Holtby it was especially encouraging, even the games took on less meaning as the week unfolded.  Holtby stopped 96 of 99 shots (.970) in almost 185 minutes of work this week.  The effort included a shutout (a 1-0 Gimmick loss to Tampa Bay), his fourth of the season, good for a tie for 11th place among goalies.  It made for a good finish to the season for Holtby, who was 4-2-1 (one no-decision), 2.07, .939 in his last eight appearances.

Halak added a shutout in his only appearance of the week.  His shutout in the season’s penultimate game and Holtby’s to follow in the finale made it the first time the Caps recorded consecutive shutouts since January 12/14, 2002 when they posted consecutive 1-0 decisions over Florida and Boston, the latter coming in overtime.  Olaf Kolzig was the goalie of record in both games.  The shutouts by Halak and Holtby are the first time in franchise history that the Capitals closed the season with a pair of shutouts. On the other hand, they have had it done to them, losing consecutive 3-0 decisions to Carolina and Buffalo to close the 1998-1999 season.

The Caps almost did it.  They almost led the league in power play percentage.  As it was, they finished second with a 23.37 percent conversion rate to Pittsburgh’s 23.38 percent.  If the Caps either did not have that lone power play in the season finale or managed to convert on it, they would have had the title.  As it was, they had a good week on the man-advantage, even if three of the teams they played (Carolina, Chicago, and Tampa Bay) finished in the lower half of the league in penalty killing.  Still, they had the week’s best performance against St. Louis (2-for-4), a team that finished second in the league overall in penalty killing and best in road penalty kill.

If the power play was good, the penalty killing was better.  For the second time in four weeks the Caps killed off all the shorthanded situations they faced.  Over the last five weeks of the season the Caps killed off 45 of 50 opponents’ power plays (90.0 percent).  In Week 26 it was a combined effort.  The defense held opponents to 10 shots in 15:19 of power play time, and the goaltenders did the rest in turning away all ten shots.  And, unlike the power play that faced less than top-notch penalty killers, the Caps faced three teams – St. Louis, Chicago, and Tampa Bay – in the top half of the NHL power play rankings.

After a season in which scoring at even strength was a continuing, and arguably most concerning issue with this club, the Caps demolished teams at evens in Week 26.  It was a combination of things, as it often seems to be when success is achieved.  The Caps shot 13.9 percent at even strength for the week while holding opponents to a 2.8 percent shooting effort.  It was a good thing, too, since the Caps were outshot, 113-72 at even strength.

Of four Caps taking at least 15 draws for the week, only Nicklas Backstrom made it to 50 percent overall (27-for-54, 50.0 percent).  Backstrom and Eric Fehr were the only Caps taking more than two offensive zone draws for the week who finished over 50 percent, both at 57.1 percent.  The Caps finished the season where they played much of it in the circle, a consistent 45-50 percent club, but not one who could dominate in the circle and assume an offensive posture at the start of plays.

It was a sparkling week in scoring by period for the Caps.  In Week 26 the Caps held opponents scoreless in the first period and allowed only a single third period goal.  They outscored opponents in each of the periods, building up multiple goal margins in each period for the week.  As it was, the Caps would finish fourth in the league in second period goals scored.  On the other hand, it would be the only period in which they finished on the plus side of the ledger (plus-6).  They were minus-6 in the first periods of games and minus-5 in the third period.

It was a good week where it counted, in wins and losses.  Unfortunately, even they did not count for much in the end as the Caps were eliminated from the post-season.  And even with the 3-0-1 record in Week 26 there were problems of a persistent nature, mostly in the possession game, that lurked under the surface.  Hopefully, no one will have been mesmerized by a good week in a disappointing season, because frankly, it was a misleading result that was more the product of opponents tuning up for the playoffs and strong goaltending.

Posted by The Peerless at 11:08 AM No comments: