The Washington Capitals raise the curtain on the home portion of their 2020-2021 season on Friday night when they host the Buffalo Sabres at Capital One Arena.  The Friday-Sunday two-game set with the Sabres will be a rematch of the two-game set that the teams played to open the season last week, both games won by the Caps.

Buffalo is a team that seems in a perpetual state of rebuild, having failed to reach the postseason in nine straight seasons coming into this year.  They have a foundational piece they hope to build around in Jack Eichel locked up through the 2025-2026 season ($10 million salary cap hit) and a top-end talent in Taylor Hall, those two players tied for the team lead in points through four games (six points apiece).  The production drops off a bit from there, with Victor Olofsson and Sam Reinhart tied for third on the club in points (both players 2-1-3, minus-3, so far).

Olofsson is something of a tale of perseverance.  He was a seventh-round (181st overall) draft pick of the Sabres in 2014 and remains one of only five players taken in the last round of that draft to play in the NHL.  After he was drafted out of MODO Hockey Ornskoldsvik in Sweden, he spent two more seasons with MODO before moving on to Frolunda HC in the Swedish Hockey League.  Two seasons with Frolunda, and then it was off to the Rochester Americans in the AHL for the 2018-2019 season, where he went 30-33-63, plus-12, in 66 games in his only season in the AHL.  He had six “get acquainted” games with the Sabres in that 2018-2019 season, posting a pair of goal and four points in six games.  It was all prelude to a fine rookie season in which he went 20-22-42, minus-1, in 54 games and finished seventh in Calder Trophy voting for rookie of the year.  It was a bit of a long road for Olofsson, who was the oldest skater receiving votes in Calder balloting.  In four games to date, he has alternated games with scoring goals, opening the season with a goal against the Caps and scoring a goal in the first of a two-game set with the Philadelphia Flyers.  It might be said that at least so far this season, Olofsson is entirely an offensive player.  He had minus-ratings in three of his first four games (minus-3 overall) and has yet to be credited with a hit, which might not be surprising given his somewhat smallish stature (5’11”/176 pounds).  Olofsson is 2-1-3, minus-4, in four career games against Washington.

Sam Reinhart was taken in the same 2014 Entry Draft in which Olofsson was taken by the Sabres, albeit at the other end of the spectrum – second overall after defenseman Aaron Ekblad by the Florida Panthers.  Reinhart has had a fine early career for the Sabres.  Since he came into the NHL in 2014-2015 he ranks second on the club in goals scored (111), third in assists (147), and second in points (258).  He has 37 power play goals in that span, second to jack Eichel (40), and his 76 power play points ranks third on the team.  Only Eichel has more game-winning goals (24) than does Reinhart (15).  However, what Reinhart has not yet done is break through to elite scorer status.  Only once in five full seasons had he finished with more than 50 points (65 in 2018-2019, although he does have two 50-point seasons).  Reinhart did not light the lamp in either game of the two-game set against the Caps last week, but he did post a pair goals, including the game-winner, against the Flyers in the Sabres’ lone win to date, a 6-1 win over Philadelphia on Monday.  Reinhart is 5-5-10, minus-6, in 16 career games against the Caps.

If the Sabres have a “grand old man” on the roster, it would be defenseman Rasmus Ristolainen, despite the fact that he just turned 26 years old in October.  He is the active leader in games played for the franchise (497) after having been drafted eighth overall by Buffalo in the 2013 Entry Draft, the third defenseman taken after Seth Jones (Columbus) and Darnell Nurse (Edmonton).  Ristolainen has an unfortunate distinction in his draft class.  His career minus-143 rating is more than twice as bad as the next player on the list (Bo Horvat, minus-66).  Nevertheless, Ristolainen is a top-ten defenseman, or close to it, in many career categories for the Sabres – games (497/11th), goals (43/10th), assists (185/seventh), points (228/T-seventh with Jim Schoenfeld), power play goals (13/ninth), power play points (104/fourth), overtime goals (four/first), game-wining goals (six/T-ninth), hits (1,180/first since 2005-2006), blocked shots (782), and takeaways (116/third).  Unfortunately for Ristolainen and the Sabres, what he does not have, even as the active leader in regular season games played, is a single appearance in the postseason.  He had a goal against the Caps in the second of the two-game set last week his only point of the season to date.  Ristolainen is 1-8-9, minus-6, in 18 career games against the Capitals. 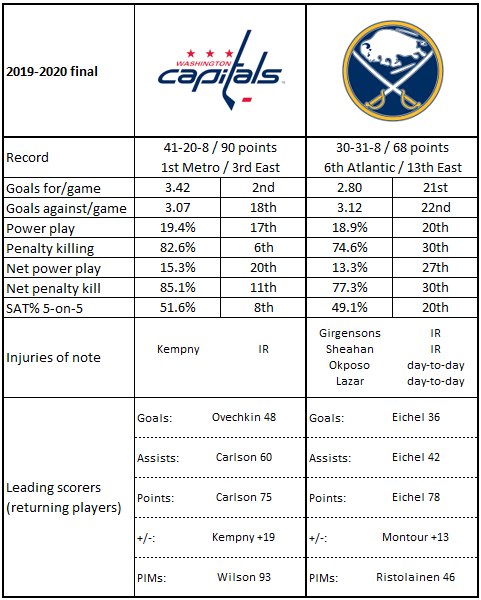 2.  The Sabres have allowed only 25.3 shots per game in four games, fourth fewest in the league.  On the other hand, teams are shooting 11.9 percent against Buffalo.

3.  Only Chicago has lost more games when trailing first without winning one (0-3-1 in four instances) than Buffalo (0-3-0 in three games, tied with Edmonton) when giving up the first goal of a game three times.

4.  No team has spent less time per game killing penalties so far than the Sabres (2:15/game), more than a full minute less than the next team (Nashville: 3:20/game).  That is a product of being shorthanded 1.25 times per game, fewest in the league.

In four games, the Sabres have employed three goalies – Carter Hutton, Linus Ullmark, and Jonas Johansson.  None have been especially impressive.  Hutton has the most minutes (158:29), but he is underwater on save percentage (.899).

Johansson was a third-round pick by the Sabres in 2014, taken more than 50 spots ahead of the New York Rangers’ Igor Shesterkin, for what that might be worth.  But he is off to a slow start in the NHL phase of his career, with a record of 1-3-1, 2.95, .894 in seven games this year and last.  Johansson is a restricted free agent after next season.  The goaltending competition is on in Buffalo.  Hutton is 3-4-2, 3.39, .881 in ten career games against the Caps; Ullmark is 1-3-0, 2.98, .897 in four career games against Washington; and Johansson has not yet faced the Capitals in his career.

No goals, no assists, no points, two shots on goal, and a minus-4 rating in four games.  His personal shot attempts-for at 5-on-5 of 45.0 percent his worst among defensemen.  At least he has not yet been charged with a giveaway, but Dmitry Orlov had not had a good start to the 2020-2021 season.  And then…this.  It is yet to be determined how much, if any time Orlov and other members of the merry band will miss (it will be at leas four games), but when he does return, he has to be better – a lot better – than he has been so far.

This is especially true insofar as Orlov has had a certain, “wind him up and let him go” consistency over the years. He plays every game (dressed for every game since the 2015-2016 season), he gets 27-33 points (his range over the last five seasons).  He was a player a coach could depend on not being an issue to be addressed.  Well, now his absence for at least four games will have to be addressed.  Fortunately, the Caps can plug in Jonas Siegenthaler, who has not yet taken the ice this season but who played in 64 games last season, his first full season in the NHL.

As if it was not difficult enough that the Caps were competing in a loaded division, trying to assimilate new systems and schemes under a new head coach on the fly without the benefit of any preseason games, of dealing with age creeping up on the roster.  Now, some players have violated COVID protocols and will miss at least four games, and one of those players has tested positive for the COVID-19 virus.

At least four games will be missed by Alex Ovechkin, Evgeny Kuznetsov, Dmitry Orlov, and Ilya Samsonov.  Seven percent of the schedule, two games against Buffalo and two against the New York Islanders.  Years ago, there was a thought in the NFL that elite teams needed an offense built around a top-echelon quarterback, running back, and wide receiver.  The Dallas Cowboys were the example often cited.  Imagine those teams (when they were truly competitive) without Troy Aikman, Emmitt Smith, and Michael Irvin.  The Caps will be missing an elite left wing, a gifted center, a solid top-four defenseman, and their number one goaltender.  How is that supposed to work?

The skaters here have a combined 2,436 regular and postseason games in their careers, which suggests unvarnished stupidity on the part of the players.  They’re not kids.  But, as they say, it is what it is, and the first consideration is the health of the players, coaches, staff, and families.  Still, the on-ice challenges for the club just got harder.

Posted by The Peerless at 5:14 PM No comments: