The Peerless Prognosticator is ON THE AIR!!! -- Eastern Conference Semifinals: Game 7/Capitals at Rangers, May 12th

Game 7. It is not like this is something new for the Washington Capitals. Their Game 7 against the New York Rangers on Saturday will mark the sixth time in their last eight playoff series in which the Caps have gone to a seventh game to settle a series. In their previous five Game 7’s, the Caps are 2-3, having won two of the last three Game 7’s they faced.

This is a double elimination game that will shine a bright light on both goaltenders, one a rookie facing only his second Game 7 in his brief career, the other in his seventh season but facing only his third Game 7. This being a game played at Madison Square Garden, the focus will be on the veteran, “The King,” Henrik Lundqvist. And for all his accomplishments in his seven-year career, these kinds of games – a chance for him to close out an opponent – have not gone especially well.

Is there something in particular about the Caps that makes Lundqvist seem ordinary for stretches? Well, if you look at the manner in which they scored their 12 goals in this series… 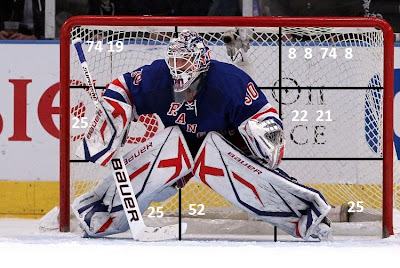 Clearly, it is not likely that the Caps are going to beat him low. The three goals scored at ice level were a tap-in by Jason Chimera off a loose puck that ricocheted off the skate of Nicklas Backstrom, a Chimera goal off a scramble after Lundqvist tried to play the puck from behind his own net, and a five-hole drive on a power play by Mike Green. That last one Lundqvist might have wanted back, but the point is that the Caps have not – and likely will not – beat Lundqvist cleanly down low. He covers the bottom of the net too well for that.

But up top, that’s a different story. Alex Ovechkin has scored all three of his goals in this series over Lundqvist’s glove hand – once from the top of the offensive zone through a screen on a power play, once from almost the same spot on a shot that Lundqvist got a glove on, but not enough to keep it from flopping over the goal line, and once on a one-timer from the high slot on a power play when he caught Lundqvist drifting across the crease.

John Carlson added one over that glove hand when he rifled a one-timer through a group of players in front of Lundqvist on a power play, making it four of 12 goals in that corner of the net. Carlson made good over the other shoulder when he wristed a shot across his body and over Lundqvist’s blocker. Nicklas Backstrom found that same soft spot from almost an identical spot on the ice, firing a shot on the long side over that blocker.

In beating Lundqvist, low is no way to go. High is what the Caps have to try.

Chris Kreider scored the game-winning goal in Game 1 of this series. He played more than 26 minutes in the triple-overtime game in Game 3. But since then he has played a total of 20:37 in three games. He does not have a point since that Game 1 goal. His is an example of secondary scoring the Rangers have not had a lot of in this series, but it is also a reflection of his apparently being in coach John Tortorella’s dog house. Why? Well, he was on the ice for three of the Caps’ five total goals in the first three games of the series. Then, in Game 4, it was his ill-advised pass through the middle that ended up on Alex Ovechkin’s stick and then in the back of the Ranger net for the first goal in a 3-2 Caps win. Since then, he has been more or less stapled to the Ranger bench.

Alexander Semin has one point in this series (an assist in Game 3). He does not have a goal since Game 5 against Boston in the opening round. The eight games without a goal matches his season high drought (November 25 – December 15). He has only seven goals in his last 36 playoff games and has only one in 18 second round playoff games in his career. If there is a Cap who needs to be heard from in this game, Alexander Semin is that Capital.