The Peerless Prognosticator is ON THE AIR!!! -- Game 4: Stars at Capitals, October 8th

The Washington Capitals wrap up their two-game home stand on Tuesday night when they host the Dallas Stars at Capital One Arena.  The Caps will be hoping to earn a split and three of a possible four points on the home stand after dropping a 3-2 overtime decision to the Carolina Hurricanes on Saturday night.

The Stars will be finishing a three-game road trip after dropping their season opener at home to the Boston Bruins, 2-1.  Dallas had stops in St. Louis and Detroit before coming to Washington, losing to the Blues, 3-2, and falling to the Red Wings, 4-3, to close a disappointing back-to-back set of games to start the season 0-3-0.

Dallas was, at best, an intermittent participant in the postseason in the decade leading up to last year, reaching the playoffs twice (2013-2014 and 2015-2016) and winning one postseason series (2015-2016).  Last season, the Stars wandered across the prairie through their first 48 games, going 23-21-4.  They closed much better, though, going 20-11-3 over their last 34 games to reach the postseason, where they upset the Nashville Predators in six games and took the eventual Cup champion St. Louis Blues to the brink of elimination before falling to the Blues in seven games in the second round.

Victor Hedman has not done it.  P.K. Subban has not done it.  Neither Kris Letang nor John Carlson have done it.  But John Klingberg is one of six defensemen to have posted at least 40 points in each of the last five seasons before this one.  Not that he gets a lot of attention for his effort.  In those five seasons he received votes for the Norris Trophy as top defenseman, but he did not finish higher than sixth in the voting.  Only two defensemen in team history have recorded more 40-point seasons than Klingberg – Sergei Zubov (ten) and Craig Hartsburg (six).  He is one of only three defensemen in team history to have multiple 50-point seasons (two), trailing Hartsburg (four) and Zubov (six).  That Klingberg should be this productive is a bit of a surprise, he being a fifth round (131st overall) pick in the 2010 Entry Draft and the 40th defenseman taken in that draft.  Of the 39 defensemen taken ahead of him, 18 have not appeared in an NHL game, and only four have appeared in more games than Klingberg (370) – Radko Gudas (419), Erik Gudbranson (469), Justin Faulk (561), and Cam Fowler (622).  Klingberg has yet to record a point in three games, which is a bit odd, given that he had 11 points in 11 October games last season and has been a very productive early season player, going 10-26-36 in 45 career games played in October.  He is 0-8-8, plus-1, in nine career games against the Caps.

One question that the Stars might like an answer to sooner than later is whether Ben Bishop is truly an elite goalie or merely an intermittent star.  Three times in his career, Bishop was a Vezina Trophy finalist as the league’s best goalie (he finished second twice, including last season, and third once).  In the first two instances in which he was named a finalist, he followed up that season with somewhat of a drop-off.  After finishing third in Vezina voting in 2013-2014 with Tampa Bay (37-14-7, 2.23, .924, five shutouts), he went 40-13-5 for a loaded Lightning team in 2014-2015, but his goals against rose to 2.32, and his save percentage dropped to .916, and he did not receive any votes for the Vezina.  He finished second in the Vezina voting the following year after going 35-21-4, 2.06 (best in the league), .926, with six shutouts.  However, in his nex season, Bishop went 18-15-5, 2.54, .910, with one shutout split between Tampa Bay and the Los Angeles Kings.  After going 27-15-2, 1.98, .934 (best in the league), with seven shutouts on his way to a second-place finish in the Vezina voting last season, the question will be if he can, at age 33 (he will turn 33 in November) put together consecutive top-notch seasons.  Bishop is 3-6-2, 3.41, .890 in 12 career appearances against the Capitals. 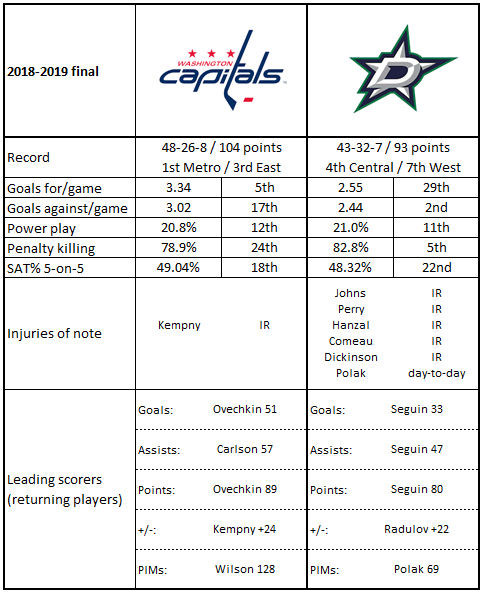 1.  The three losses in regulation to open the season is the first time since the team moved to Dallas that the Stars lost their first three games of the season in regulation.  The last time they opened the season with three straight losses was in 1988-1989, when the Minnesota North Stars dropped decisions to the St. Louis Blues, Montreal Canadiens, and Quebec Nordiques to start the season.

4.  Only the Calgary Flames were looser with the puck in the Western Conference than the Stars.  Dallas was credited with 1,029 giveaways last season to Calgary’s 1,189.

5.  The Stars had the worst shot attempts-for percentage at 5-on-5 of any Western Conference playoff qualifier last season (48.32 percent).

1.  Jakub Vrana’s overtime goal is one of only three scored in the NHL through Sunday’s games and was the only one scored by a forward.  Carolina defensemen have the other two (Jake Gardiner and Jaccob Slavin).

3.  Washington was second in the league in fewest shots allowed per game (25.3) through last weekend.  Only Buffalo was better (24.5).

4.  It is early, but the Caps are sixth in the league in shot attempts-for percentage at 5-on-5 through the first week of the season (56.72). The concern might be that they are 21st in that category when trailing (42.31).

5.  Of the 18 skaters to dress so far for the Caps, only Carl Hagelin has been on the ice without a goal scored or a goal scored against through three games.

The buzz with Roope Hintz started as far back as 2016.  It continued into last spring.   After posting five goals in 13 playoff games last spring, he is looked at in some quarters as a star in the making.  Not bad for a second round (49th overall) pick in the 2015 Entry Draft, the ninth left winger taken in that draft.

Hintz, who was 9-13-22, minus-11, in 58 regular season games last season as a rookie with the Stars, is living up to his part of the bargain in the early going, posting three goals in his first three games this season on only five shots.  It follows on a productive finish that Hintz had last season when he went 4-7-11 over his last 14 games.

Hintz has size (6’3”/215) and has a scouting report that states, “[he] can play the role of scorer or playmaker; has killer instincts and a keen eye for scoring opportunities. Very high hockey-IQ and has incredible awareness on the ice; is able to play the puck creatively, all the while creating space for his adjoining teammates. Creates separation, not through physical play, but through outskating the opposition. His proactivity, recognizing and taking advantage of scoring chances, makes him a valuable teammate and offensive catalyst for whoever he plays with. A very good skater that is able to create chances through his speed. Possesses a hard, accurate release on his shot, as well as good hands and overall puckhandling ability. All-in-all, a prolific scoring threat that continuously plays with jump and provides energy for teammates.”   On a team that lacked offensive punch at times last season, his rapid development will be counted on to improve that level of production for the Stars this season.  In one career games against the Caps, Hintz is 0-1-1, minus-1.

Braden Holtby has faced each of the other 30 teams in the NHL over his career, but against only one of them does he have a career goals against average over 4.00.  That would be against the Dallas Stars, against which he is 2-4-1, 4.02, .870 in eight career appearances.  Only twice in eight appearances has he allowed as few as two goals, and in one of those he entered the game in relief, playing the last 30 minutes in place of Jaroslav Halak and allowing two goals on 13 shots in a 5-0 loss to the Stars on April 1, 2014.  In two other appearances he was pulled early, in March 2015 after allowing four goals on 22 shots in 34 minutes in a 4-2 loss, and again in March 2017 after allowing three goals on 11 shots in another 4-2 loss.  Six times in eight appearances, Holtby’s save percentage was under .900.  If there is a silver lining here, it is in Holtby’s having earned wins in two of his last three appearances against Dallas, a 33-save effort in 4-3 overtime win in Dallas in December 2017, and a 24-save effort in a 4-3 win at Capital One Arena in March 2018.

Holtby is also fighting a career tendency to slow starts.  His .911 career save percentage in October is the second worst, by month, over his career (in February games he is .909).  That includes his .900 save percentage so far through two games to start this season (45 saves on 50 shots).  He also has allowed more shorthanded goals in October over his career (six) than he has in any other month.

In its Dallas incarnation, the Stars have tended to employ head coaches with a defensive orientation – Ken Hitchcock, Dave Tippett, Lindy Ruff.  Those styles have not been easy for the Caps to solve.  Jim Montgomery, now in his second season in Dallas, seems more of a two way sort who, in alignment with how the league seems to be going, emphasizes quickness, speed, and pressure.
For the Caps, the chore will be to keep Dallas from dictating pace and to bend the pace to their own liking.  In this respect, the play of centers Nicklas Backstrom and the returning Evgeny Kuznetsov could be key, along with the ability of the defense to withstand a heavy forecheck.  But, it’s not as if the Caps have not seen this before.  It seems to describe how most teams try to play these days.