The Peerless Prognosticator is ON THE AIR!!! -- Game 71: Capitals at Jets, March 16th

If it’s Friday, it must be Winnipeg, otherwise known as the Canadian Riviera. And here the Washington Capitals will begin their stretch drive in the 2011-2012 season in earnest. The Caps will be visiting MTS Centre to take on the Winnipeg Jets in a game that could be a death blow to the Jet’s playoff chances and a hearty boost to the Caps’ chances as they address Game 2 of their five-game road trip.

A win over Winnipeg in this game in regulation time would give the Caps a six-point lead over the Jets for eighth place in the Eastern Conference with 11 games to play. In other words, if the Caps split their remaining contests and garnered 11 points, Winnipeg would need to capture 18 of 22 available points (the Caps owning a tie-breaker advantage over the Jets in regulation-plus-overtime wins) in their last 11 games.

It would not be hyperbole to say that this game is Winnipeg’s season.

And it is not as if the Jets will be coming into this contest at the top of their game. Since completing a three-game winning streak over Colorado on February 19th, the Jets are 4-3-2. But Winnipeg, as much as the Capitals, are a Jekyll and Hyde team when it comes to playing at home and on the road. In the friendly confines of MTS Centre the Jets are 22-10-4 this season, those 22 wins surpassed by only three other teams in the East (the Caps being one of them). They are 6-1-2 in their last nine games on home ice. In those nine games they are averaging a whopping 4.11 goals per game and have allowed only 2.33 a game.

Special teams have been the fuel to spark the Jets at home recently. In their 6-1-2 run on home ice they have 11 power play goals in 26 opportunities, an astounding 42.3 percent. Their penalty killers have not been as proficient – 18-for-24 (75.0 percent) – but then again, they have not had to be.

Here is how the teams compare so far this season going into last night's action: 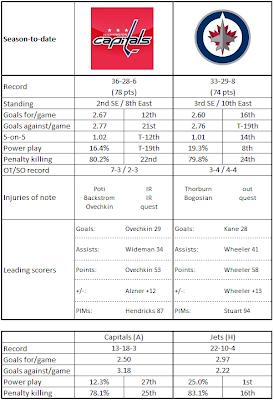 2. Winnipeg has lost consecutive home games in regulation only twice this season and never more than two in a row. They are a plus-27 (goals for/goals against) in 36 home games, but a minus-38 in road games. No team has more power play goals at home than the Jets (30); none has scored fewer such goals on the road (11). They are one of only four teams not to have allowed a shorthanded goal at home; only two teams (New Jersey and Detroit) have allowed more of them on the road. Seems the league granted Winnipeg two teams when the Thrashers were relocated from Atlanta.

1. Washington brings a three-game road winning streak into this game. Modest it may be, but it is the longest road winning streak for the Caps so far this year. In fact, on only one other occasion did they win consecutive games – December 7th and 15th, the second of those wins a 1-0 shutout of the Jets at MTS Centre.

2. In 34 road games this season the Caps have “out-penaltied” their opponents by a margin of 365 penalty minutes to 310 – 1.62 minutes per game. The power plays are 128 for the home teams and 106 for the Caps. Home teams are converting power plays at a rate of 21.9 percent against the Caps. For the Caps to equal the 28 power play goals scored by home teams, they would have had to convert 26.4 percent of the 106 opportunities of their own. As it is, they are converting only 12.3 percent of their chances.

3. Of the eight teams currently eligible for post-season play in the East, the Caps have the worst plus-minus on shots for/shots against per game (-1.7).

5. Only three teams in the league have recorded more losses by three or more goals than Washington – Tampa Bay, Columbus, and the Islanders.

Which Ondrej Pavelec is going to show up in goal for Winnipeg? The one who stopped 56 of 57 shots in consecutive games a couple of weeks ago in beating Florida, 7-0, and Buffalo, 3-1? Or the one who has allowed five or more goals in four of his last 12 appearances? Being really good or really bad in his last 12 games means that his numbers have been really mediocre overall: 6-5-1, 3.09, .905, with one shutout. But against the Caps? In his last nine appearances Pavelec is 4-3-1, 1.55, .951, with one shutout and one unfortunate face-plant.

The Caps have 13 game-winning goals on the road this season. If you were asked which Capital leads in that category, you might answer, “Alex Ovechkin.” You’d be wrong; he has one. Alexander Semin? Nope; he has one, too. Troy Brouwer has two, but he does not lead the team, either. Dennis Wideman has three game-winning goals on the road this season – an overtime game-winner at Pittsburgh on October 13th, a game-winner at Columbus on New Year’s Eve, and the first goal of a 3-0 shutout in Montreal on February 4th. He is on a five-game points streak, having registered an assist in each of those games and has recorded at least 23 minutes of ice time in all of them. And of the 12 goals scored against the Caps in those five games, Wideman was on the ice for only two of them.

1. First five. Winnipeg is said by some to be the loudest arena in the league. The crowd will be ready to do their part to rev up the home team. The first order of business for the Caps will be to win – or at least prevent the Jets from winning – the first five minutes. Take some air out of the balloon; keep things simple and deliberate.

2. Play five. Winnipeg has the best home power play in the league, and it has been only better in recent games at MTS Centre. The Caps cannot afford to wear a path to the penalty box. If the power play opportunities creep up, say, more than one in a period or more than four for the game, the Caps are going to find themselves in trouble. Keeping five skaters on the ice is key.

3. High Five. The Caps cannot afford a good game by merely one or two people at this stage. The guys expected to carry the mail have to do just that. Alex Ovechkin, Alexander Semin, Dennis Wideman, Marcus Johansson, and Brooks Laich are the top point-getters for the Caps. They need to be at the top of their games to answer a formidable Winnipeg offense on home ice.

In the end, the long view has the Caps as a struggling team on the road this season. Their road record is 12th in the Eastern Conference and worst among current playoff-eligible teams. But on the other hand, they have won their last three road contests – at Toronto (4-2), at Boston (4-3), and at the New York Islanders (5-4, in a Gimmick). Toronto and Boston are not easy places for visitors, despite the recent struggles of the home teams in those cities. This will be a bigger test, given the home team’s record and the stakes involved. The Caps can effectively eliminate the Jets as a contender with a win in regulation tonight. That should be a powerful incentive for bringing their “A” game.