The Peerless Prognosticator is ON THE AIR!!! -- Game 12: Flames at Capitals, November 4th

The Washington Capitals end their mini-two-game home stand on Tuesday night when the Calgary Flames come to town in the second and last game of the season series between the clubs.  The Caps are trying to right themselves after heading into a ditch since their 3-1 win in Calgary on October 25th.  In four games since then the Caps have not scored consistently enough (12 goals, but five of them coming in a 6-5 loss to Arizona on Sunday), have given up far too many goals (18 in those four games), have had a poor time of it killing penalties (12-for-17; 70.6 percent), and have not been able to make up for that shortcoming despite a pretty good power play (4-for-13; 30.8 percent).

On the other hand, the Flames come into this game with points in three contests since dropping their game in Calgary to the Caps (2-0-1).  After losing in a Gimmick to Montreal at home on October 28th, 2-1, the Flames knocked off Nashville, 4-3, then beat the Canadiens in a rematch, 6-2, at Bell Centre.

One of the keys for Calgary has been minimizing shorthanded situations faced.  After facing 32 such situations in their first ten games, the Flames have found themselves shorthanded only five times over their last three contests, only once in each of the last two games.  That they are 4-for-5 on the penalty kill over those games is something that has contributed to their good fortune of late.

Calgary is not a team that does it, at least so far this season, with forward-dominated scoring.  Three of the top four point-getters are defensemen, only Jiri Hudler (3-7-10) representing forwards in that top-four group.  Hudler is ranked 36th among league forwards in points.  What is worse for the Flames, at least for this game, is that their leading goal-scorer among forwards is Mason Raymond (5).  He is tied for 21st among NHL forwards in goals.  The unfortunate part for the Flames is that Raymond is on injured reserve with a shoulder injury.

Here is how the teams compare in their numbers through Sunday’s games: 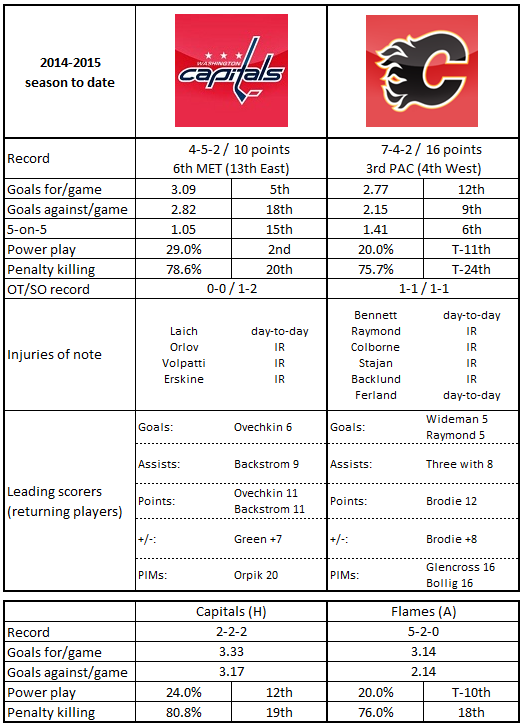 1.  Calgary is giving up 0.75 fewer goals per game through 13 games (2.15; 9th in the league) than they did last season (2.90; 24th).  It certainly doesn’t hurt that the big change is in goal.  Last season Karri Ramo took the lion’s share of appearances and did a credible job behind a poor team (.911 save percentage on a team whose other three goalies had a combined save percentage of .895).  This season Ramo is continuing that level of work, if less frequently (.914 save percentage in five appearances).  Meanwhile, Jonas Hiller, signed to a two-year/$9.0 million contract as a free agent last July, has a .938 save percentage  in eight appearances and a miniscule 1.84 goals against average.

3.  Alex Ovechkin’s four-point effort against the Coyotes on Sunday was the 18th time he recorded four or more points in a game.  Only Crosby (25), Joe Thornton (20), and Evgeni Malkin (19) have done it more (Backstrom, by the way, is tied for seventh on that list with 14 instances).

4.  The Caps have outshot opponents nine times in 11 games so far.  No team in the Eastern Conference has outshot their opponent as many times (Minnesota and Chicago have done it ten time in the West).  The Caps also have the sixth worst winning percentage in the league when doing so (.333; 3-4-2).

“Johnny Hockey” took a little while to get used to the NHL game, but he seems to be settling in just fine.  A fourth-round draft pick in 2011 out of Boston College, Gaudreau went without a point in his first five games, then was a healthy scratch against the Columbus Blue Jackets.  In seven games since that slow start, he is 2-6-8 with three multi-point games.  Both of his goals were game-winners, one against Winnipeg in a 4-1 win on October 19th, and one against Nashville in a 4-3 win on Hallowe’en.  Gaudreau, who is listed (perhaps generously) at 5’9”, 150 pounds, has seen his ice time jump from the low double digits in his first six games to 15 or more minutes in each of his last six contests.  As of Sunday he was still waiting on being told by the club to find a permanent residence instead of the hotel in which he is living in Calgary. http://www.nhl.com/ice/news.htm?id=737022 He’s making it hard to the team to do anything but tell him to check the apartment listings.  He was held without a point in 17 minutes of ice time in the Caps’ 3-1 win in Calgary on October 25th.

Last Season in Pittsburgh, defenseman Matt Niskanen recorded 162 shots in 81 games (2.0 per game) and finished the season with a career high 10 goals and 46 points.  It earned him a big pay check in free agency, courtesy of the Washington Capitals.  So far, Niskanen has 11 shots in 11 games (1.0) and is looking for his first goal for the Caps.  His role is not as diverse as that which he played in Pittsburgh, especially when Kris Letang was sidelined with a stroke.  However, his offensive play has gone into a spin lately – no shots on goal in three of his last four games, no points, and minus-5.  He has been on ice for 11 even strength goals, tied for most on the team with partner Karl Alzner.  Maybe we’re still in the eHarmony phase of the relationship, but the Caps are going to have to get better play from Niskanen in all three zones to shake the funk in which they find themselves.  He is 3-4-7, plus-3, in 19 career games against Calgary.

The Caps’ win at Calgary ten days ago is their only win in their last six contests.  It was not an especially dominating one as the Caps won, 3-1, although they did dominate the shot meter, 30-21, and held the Flames without an even strength goal.  Since that game the Flames have dug themselves out of a hole, going 2-0-1 to lift themselves into a tie for second in standings points in the Pacific Division with Vancouver and San Jose.

At the moment, there are teams going in different directions.  Calgary is winning with offense (3.67 goals per game in their last three games since losing to the Caps) and defense (2.00 goals per game), while the Caps try to find both (outscored 18-12 in their last four games, all losses, since beating Calgary).  So of course, we think the curse will be reversed. 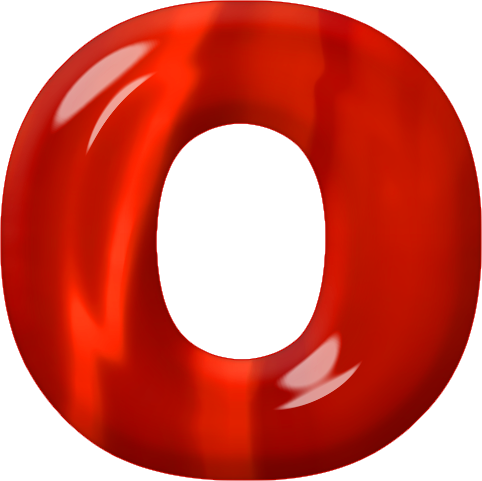