The Meaning of "Red" 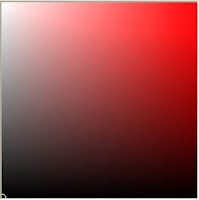 According to the site, “Pigments Through the Ages,” the color red is stoked with meaning. As we contemplate the next phase of the “red out,” it might be useful to ponder…

“The color red is the color of fire and blood. Hebrew words for blood and red have the same origin: "dm" means red and "dom" means blood. Blood and fire have both positive and negative connotations. Bloodshed, aggression, war and hate on one side and love, warmth and compassion on the other side. Ancient Greeks associated the bright, luminous red with the male principle…”

For our purposes, the positive and negative connotations have usefulness. Aggression and conflict, directed against a foe…love and compassion, the sort that binds a team with a common goal together.

“Protective powers of the color red against evil influence were common belief. Objects, animals and trees were covered in red paint, warriors painted their axes and spear-catapults red to endow the weapons with magic powers. Some of the Australian aborigines abide by this custom up to the present times. Neolithic hunters and germanic warriors used to paint their weapons and even themselves in blood of slain animals. Roman gladiators drank blood of their dying adversaries to take over their strength. In other cultures, the newly born were bathed in blood of particularly strong and good looking animals. Red painted amulettes or red gems, such as ruby or garnet, were used as charms against the "evil eye". Wearing a red ruby was supposed to bring about invincibility.”

Protection against evil influence…assimilation of an enemy’s strength…invincibility. Useful attributes in the task that is unfolding.

“Salvation from Evil is the subject of an ancient Egyptian charm: ‘Oh, Isis, deliver me from the hands of all bad, evil, red things!’”

Fans of the Flyers might consider all things “Capitals” to be evil…and one hopes that they cry, “deliver us from the hands of all bad, evil, red things!” as the Capitals wreak havoc on their Flyers.

“Good and bad qualities are combined in Phoenix, the firebird. In Egypt, China and Central America it was associated with cleansing and revival. In China its name was the ‘Vermilion Bird’ or the ‘Substance of Fire’ and promised luck and longevity.”

Cleansing, revival, luck, and longevity. We have seen the first three of these as the Caps live to fight another day. Now, let us hope for longevity…say, to mid-June or so.

“Mere perception of red color enhances the human metabolism by 13.4 %…On the other side aggression and violence can be triggered of by red color.”

Energy is at a premium in the playoff season unfolding, as is the need to increase one’s level of aggression and, dare we say it, “violence” to be visited upon an opponent.

So wear red…celebrate aggression and conflict, love and compassion. Besides, what is “orange,” but a “warm red, intensified by a suitable yellow.” 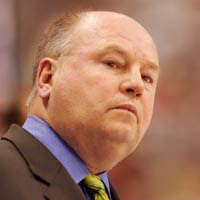 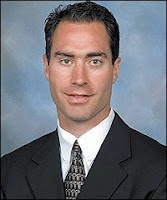 Although the Caps and the Flyers have not met in a playoff series since 1989, in one respect there are likely to be few, if any, surprises.
Bruce Boudreau and John Stevens coached against one another over a six-year span in the AHL, covering the 2000-2001 through 2005-2006 seasons. Stevens spent the entire time behind the bench of the Philadelphia Phantoms, while Boudreau coached the Lowell Lock Monsters (one season), Manchester Monarchs (four seasons), and the Hershey Bears (one season). Here is the tale of the tape of their coincidental tenures... 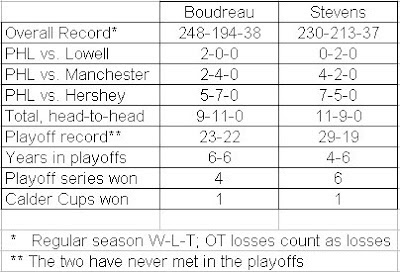 Posted by The Peerless at 7:56 AM No comments: