Meanwhile, in Washington, the Capitals had their own forward with iffy postseason success on a team that experienced too little of it.  Troy Brouwer went to the postseason three times with the Caps, and in 35 games he had just three goals and nine points.  His Caps won two postseason series but never advanced to a conference final.

Two players with similar lack of success in the spring.  It was a trade begging to be made, and so it was last July, Brouwer sent to the Blues along with goaltending prospect Pheonix Copley and a third-round draft pick for Oshie.  It was something of a rejuvenation for Oshie.  In his first year with the Caps he set a career high in goals scored (26), scored more many power play goals (11) than he did in his previous three seasons combined, set a personal best in shooting percentage (14.1 percent), and he became something of a faceoff go-to guy (52.7 percent on 262 draws taken, tops in both for his career).

As you might expect for a first line winger, his scoring mattered.  In 23 games in which he scored a goal (he had three multi-goal games), the Caps were 18-2-3.  They were 27-4-4 in games in which he recorded a point.

Oshie’s ten-game segments were all over the place, lacking in consistency from segment to segment and in different categories moving in the same direction.  He started and finished well with a first and eighth ten-game segment characterized by high point totals (15 of his 51 points were recorded in those segments), and his Corsi numbers (plus-81 at 5-on-5) and scoring chance differential (plus-55) were recorded in those segments.  In between, though?  Take the fourth segment.  In it, he recorded eight points on four goals and four assists, one of his best ten-game segments of the season, but his Corsi-for at 5-on-5 was his worst of the season (minus-38), as was his scoring chance differential (minus-15).  It all seemed to “even out” in the end, so to speak – good goal and point totals, solid positives in the Corsi and scoring chance numbers at fives – but how he got there was an interesting journey. 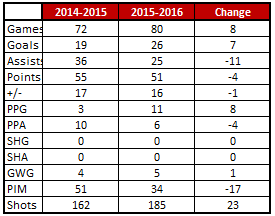 Fearless’ Take… T.J. Oshie played bigger than his program information would suggest.  At 5’11, 189, you would not think him as a particularly physical player.  However, consider that Oshie, Alex Ovechkin, and Jason Chimera were the only Capitals to finish the regular season with 20 or more goals and at least 100 credited hits, and among forwards appearing in at least 20 games, Oshie finished third in hits per game overall (1.7), behind Alex Ovechkin (2.8) and Tom Wilson (3.1).  He didn’t seem bashful about going to the net, either.  He was third on the team in high-danger scoring chances at 5-on-5 (70), behind Justin Williams (84) and Alex Ovechkin (83; numbers from war-on-ice.com).

Cheerless’ Take… T.J. Oshie had fewer primary assists at 5-on-5 (9) than Tom Wilson (11), and Wilson had almost three fewer minutes of ice time per game at 5-on-5 than Oshie.  Now, I’m not the sharpest knife in the barn, but wouldn’t you think a top line forward would have more primary assists than a third/fourth line forward?  Even if he’s skating with Nicklas Backstrom a lot of the time?

Odd Oshie Fact… “Oshie After Dark.”  T.J. Oshie did not record a point in five regular season day games, which was perhaps a bit odd given that coming into this season he was 3-17-20 in 30 day games with St. Louis.

The Caps were on a roll, 11-1-1 in 13 games leading up to their December 18th battle with the Tampa Bay Lightning at Verizon Center.  Not that the Lightning were playing poorly; they were 5-2-0 in December leading up to that game.  As it turned out, the game was really two games in one.  Tampa Bay won the first 30 minutes, running out to a 3-0 lead and chasing starting goaltender Braden Holtby.  The Caps had the Lightning right where they wanted them.  Alex Ovechkin scored a power play goal on a slick feed feed from T.J. Oshie, who collected a loose puck in front and spun a back pass to Ovechkin at the 13:49 mark of the second period to make it 3-1.  In the third period, Oshie collected a loose puck along the wall in his own end, sped up ice past Braydon Coburn, and snapped a shot past goalie Ben Bishop to make it 3-2 just 7:54 into the period.  After Ovechkin tied the game on a power play goal two minutes later, Oshie recorded another primary assist, taking a feed from Ovechkin and sliding the puck to Marcus Johansson on the right side for a one-timer to give the Caps a 4-3 lead with less than five minutes left in regulation.  Oshie potted an empty net goal with 25.0 seconds left to give the Caps a 5-3 win.  It was Oshie’s third four-point game of his career and first as a Capital.

It was not a formula for getting up for a game.  Late in the season, the Caps’ regular season fate sealed, wrapping up a three-game road trip 2,500 miles away from home against an opponent against whom you have little by way of rivalry.  That was the Caps in Arizona to face the Coyotes in an utterly meaningless game.  It showed.  The Caps allowed three third period goals in what would be a 3-0 loss.  For his part, Oshie skated 14:50, had one shot on goal, won a faceoff, was a minus-1, had one scoring chance, and otherwise had as quiet a game, as did his teammates.

On a purely personal level, T.J. Oshie enjoyed his best postseason in six trips to the playoffs.  He played 12 games, most in any single postseason of his career, had six goals (another career best), four assists (another career high), 10 points (yes…a career best), was plus-2 (first time he was a plus player in six postseason tries), recorded 59 shots on goal (more than the total of his previous two postseasons combined – 50), and won 59 percent of 59 faceoffs he took.  His Corsi-for and Corsi/Releative numbers were good; he had as many shot attempts at 5-on-5 (44) as he had in his previous three postseasons combined.  It wasn’t even a case of his wilting in the second round as did a number of his teammates; he had five goals against the Penguins in six games, including a hat trick and the game-winning overtime goal in Game 1.  He even challenged an opponent to fight – a more accomplished pugilist in Brayden Schenn, too boot (15 career regular season and postseason fights) – to answer for a questionable hit in Game 5 of the first round against the Philadelphia Flyers…

He did just about everything but win.

He became the fifth player to record a postseason of ten or more points in the post-2004-2005 lockout era with the Caps (Alex Ovechkin (four times), Nicklas Backstrom (twice), Alexander Semin, and John Carlson are the others).  Five games was his longest streak without a point, which is rather remarkable for a player who had just 51 points.  And, at least for one year, he shook off a series of disappointing playoff campaigns insofar as his own contributions are concerned.  It was a fine start to his stay in Washington, one that certainly has Caps fans hoping it extends beyond next year when his current contract runs its course.  His reliability and consistency made right wing a spot that was a plus for the team this season that it was not in recent years.