No pucks today at Kettler; it was a day for some high-tech prodding and evaluating. The boys went through a series of time and maneuverability tests involving Star Wars-y looking little things on tripods, pieces of tape tacked on the boards at precise spots, and a bucket of water.

We caught the Group A boys in the first session, who were put through a variety of skating tests – things like a down and around the end boards and up the wall to time their blue line-to-blue line times, a sprint from a standing start at one blue line to the other blue line, an “S-curve” test to assess speed at making turns (not to mention an ability to stay on one’s feet), and a sprint-stop-back-sprint mini-herbie that tested one’s ability to stop and start (and again, stay on one’s feet). It was vaguely reminiscent of watching time trials at Indianapolis in its devotion to measuring times and the sheer repetitiveness of it. But there were other things we took away from the Group A session that weren’t necessarily subject to, well, subjective measurement…

-- The Odd Couple: Evgeny Kuznetsov and Dmitri Orlov. These two are the “Mathieu Perreault and Francois Bouchard” of this year’s camp – almost inseparable. Sharing a homeland and a language helps, but in an odd way they reminded us a little of Felix Unger and Oscar Madison, too. Not the sloppy versus fastidious comparison, but rather in Kuznetsov’s exuberance and Orlov’s comparatively quiet demeanor. Although it was Kuznetsov who would go off looking for Orlov, following him around and exchanging banter with him until the next drill.

-- Joe Finley… What impressed us from a distance was more an attitude he seemed to have that players in Group A were “his guys.” His body language and seeking out other players to chat them up just looked to us like he was a “leader” out there.

-- High-tech, low-tech… The timers are probably the cutting edge of speed-assessment devices, but we were a bit surprised at the preparations for the “S-turn” drill. Pour water out of a bucket to trace an “S” skating path, and wipe the water with the blade of a stick? Uh, guys? Go to Home Depot and spend ten bucks for a watering can.

-- Joe Finley II… Speaking of that “S-turn” drill, Joe showed ‘em how it is done. Some guys took the turns tentatively and ended up stumbling to the ice. Not Joe. He took the second turn of the “S aggressively, went skates over helmet and hit the boards with malice and purpose, as if they shot his dog. They probably heard the crash in Upper Marlboro.

-- Kuznetsov II… We are convinced that the last thing this kid does before taking the ice is paint a smile on his face. He started the day with one, and he ended it with one. He had it on all the while in-between, too. No one could be having more fun than this kid at this camp. Chatting up Orlov, Finley, Anton Gustafsson… just about anyone who skates by. Going through his drill purposefully, but without the dour expression of others, then staying long after the session ended to play an extended game of puck keep-away with one of the coaches of the session. You get the impression that Kuznetsov really likes the idea of playing hockey in North America and in Washington. And if this is true, then a dozen or so general managers might have bet wrong that he was too much of a risk to draft because of perceived problems in getting a Russian on this side of the pond.

-- Smile Gus… Another case of body language has to do with Anton Gustafsson. He just looked a bit frustrated with his results in the drills this morning. Not stick-smackingly frustrated, but more like “dammit, I almost nailed that” kind of frustrated. He still looks to be significantly ahead of where he was in earlier camp participation.

-- Stefan Della Rovere… SDR has the look of a guy who isn’t necessarily going to impress guys holding stop watches (or their electronic equivalent). And it showed a bit this morning. Not that he was stumbling over himself or anything as dramatic as that, but he didn’t look sharp. His contributions, though, are as likely to come from the intangible – an ability to aggravate an opponent, the ability to deliver the timely hit, a willingness to take a hit to make a play – as from the tangible sorts of measures on display today.

Later today the boys go at it in a scrimmage. We can’t make it for that one, but there won’t be any lack of coverage from our fellow wizards. If you can’t get out to see it yourself, you’ll still have lots to read. Meanwhile, here are some pics from this morning’s session… 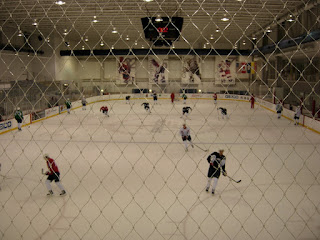 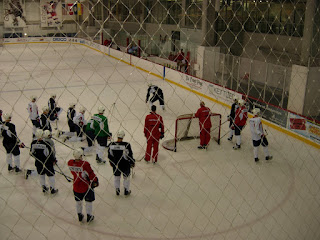 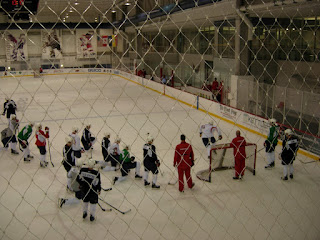 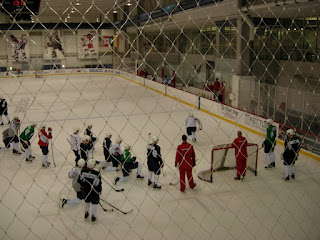 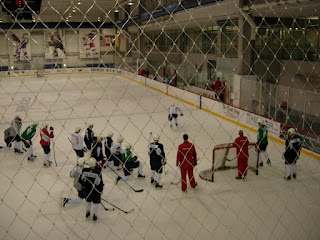 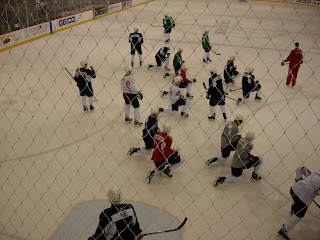 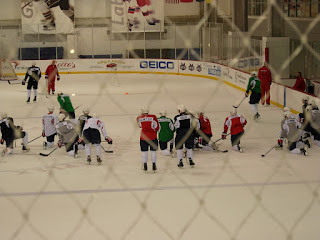 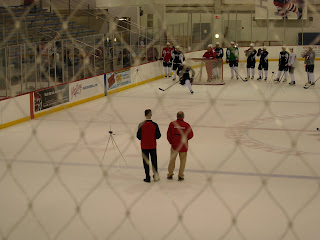 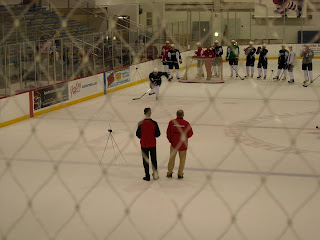 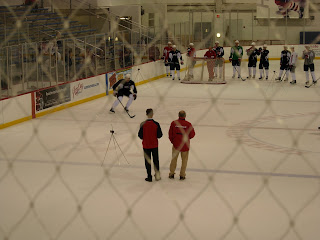 Posted by The Peerless at 2:01 PM No comments: