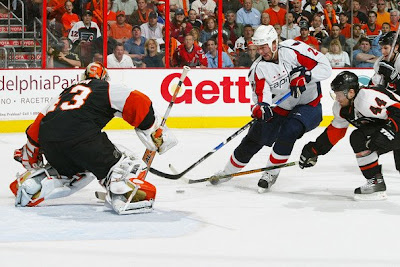 Chances are, if you look up the word, “enigma,” in the dictionary, you will find a picture of Viktor Kozlov. Despite almost universal opinion that he has extraordinary skill, he has been a thoroughly ordinary player over the course of his career. He has never had more than 25 goals (more than 20 only twice), never had more than 70 points (more than 60 only once). And this year, he took a big step back from his first year with the Caps in 2007-2008. A look at his ten-game segments paints a picture…

And even in those 20 games, there was enough exasperation to go around. He had multi-point games against Nashville (two assists), Tampa Bay (three assists), and Buffalo (two assists). But he managed only goals against Florida and Atlanta and was a minus player in half of those last 20 games. He had only two power play points in that stretch (compared to 2-11-13 in on the power play in his first 47 games).

Overall, his numbers weren’t there against top-flight competition. Against the other seven playoff teams in the East, Kozlov was 3-7-10, -4 in 24 games (10-21-31, -5 against everyone else in 43 games). He did fare somewhat better in the playoffs, going 4-2-6, +5 in 14 games, including four points and plus-5 in the seven-game Pittsburgh series. It serve to underline that there was so much room between Kozlov’s talent and his production this year.

If you look at the sort of measures collected at behindthenet.ca, we’d find that his production was, again, rather mediocre. Among Caps forwards playing at least 50 games, he was eighth in points scored-per-60 minutes at even strength. That is disappointing, considering he spent most of his time skating on a line with Alex Ovechkin this year. That point is driven home by the fact that he was ninth among those forwards in total assists-per-60 minutes at even strength, barely eclipsing the production of David Steckel, who is not employed to be a playmaker.

Then look at some other numbers, and be exasperated some more. In the playoffs, Kozlov – not generally thought to be much of a stalwart in terms of defensive play – had the best (as in “fewest”) goals scored against-per-60 minutes at even strength among Capital forwards playing in at least ten of the 14 playoff games. He was second in differential (goals scored for/goals scored against per 60 minutes) at +1.79 (Alex Ovechkin, +2.44). Kozlov – who until this year had never so much as scored a single playoff goal – was second on the team in goals scored per 60 minutes at even strength. He was second overall among Caps forwards in plus-minus.

Kozlov is as confounding a player as confounding gets. He has the talent to dominate at this level of play, but never has. And he is too far along in his career – now, it seems, destined to continue in Russia – to expect him to change. At times he can embarrass a goalie with a flick of his wrists, or he can settle the team down by using his size and puck handling skills to dictate the pace and lug the puck into scoring territory.

But there are other times, on display much too often, when Kozlov seems to be putting forth the sort of effort one finds in a recreation league (with apologies to those dedicated fans of the sport). He seems to be going through the motions, content to skate his shifts without mission or purpose. He is the gifted student who seems to get by with “good enough.”

Kozlov’s playoff performance redeemed, to a point, an indifferent regular season that saw his plus-minus plunge by 37 points (from plus-28 to minus-9), while his scoring dropped in terms of points-per-game (from 0.67 to 0.61). But that should not be interpreted as his having an outstanding post season. It was merely better than what he did in the first 82-game segment of the season, which was marred by a poor second half. His regular season looks a little too much like Lee Stempniak (14-30-44, -12 in 75 games). We think having to make that comparison in the context of Kozlov’s skill is one that should never be made.

Kozlov is very hard to grade because of his inconsistency, his flashes of artistry interspersed with stretches of seeming indifference. Last year, we gave Kozlov a B-, largely because of his consistency. This year, we could have gone anywhere from a C+ to a failing grade. We split the difference, more or less...well, less than the "Gentleman's 'C'."

Posted by The Peerless at 6:07 AM No comments: