“The more sand has escaped from the hourglass of our life, the clearer we should see through it.”
-- Niccolo Machiavelli

It does not seem all that long ago that Dmitry Orlov was a second round draft pick of the Washington Capitals, taken with the 55th overall pick of the 2009 Entry Draft.  But here we are, 11 years later, and only John Carlson among active Caps defensemen have appeared in more regular season games for the team (757) than Orlov (516), and if Orlov continues to display the durability he has in his last five seasons (he has not missed a regular season game in that span), he will jump into the top-ten in franchise history in games played by a defenseman.

His 2019-2020 season, while reasonably consistent with his career numbers, suffered some from internal inconsistency.  He was very productive early on, going 3-19-22, plus-9 over his first five ten-game segments, but he was just 1-4-5, minus-4, over his last two segments covering 19 games.

Orlov also had some subtle differences in other statistics that hinted at some changes in his game.  He has seen a gradual reduction in his credited hits per 60 minutes over the past five seasons, from a career high 5.52 in 2015-2016 to 4.15 this season (about a half hit per 60 minutes lower than last season).  His blocked shots were down a bit as well, from 3.48 blocked shots per 60 minutes last season to 3.21 this season.  However, he did seem a bit more disciplined with the puck, although his giveaways remain high.  In four seasons before last year, his giveaways per 60 minutes never exceeded 2.00, but this year’s 2.54 was only marginally better than last year’s 2.70.  On the other hand, he did set a career high in takeaways per 60 minutes this season with 1.92.  There was also the matter of consistency.  In 2019-2020, Orlov had 53 shots on goal on home ice, 52 shots on goal on the road.  Two goals at home, two goals on the road.  A 3.8 shooting percentage at home, a 3.8 shooting percentage on the road. 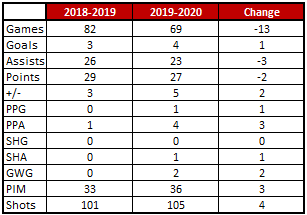 At age 29, Dmitry Orlov is already tenth in career points among defensemen in Caps history (180) and should become the tenth defenseman to reach 200 career points with the team next season.  He could leapfrog Ken Klee into tenth place in career goals scored by a Caps defenseman next year (he needs six to tie).  He is already tenth in career assists by a defenseman; he is tied for sixth in career plus-minus among Caps defensemen (plus-61, with Karl Alzner).  The point here being that Orlov, a largely unheralded defenseman who has toiled in the shadows of John Carlson, Brooks Orpik, and even Alzner to a degree over the years, has quietly compiled a rather impressive resume for a franchise known over the years for producing very good defensemen.  And the 2019-2020 season was very much in line with the history that produced that resume.

Dmitry is a minutes-eater as a defenseman (his 22:10 per game was second highest of his career), but eating that many minutes occasionally results in indigestion.  The Caps were 11-8-5 in the 24 games in which he skated more than 23 minutes.  And his offensive engagement was not as beneficial as his actual production.  Washington was just 16-12-3 in the 31 games in which he posted two or more shots on goal; 11-3-2 in the 16 games in which he did not record a shot on goal.

Odd Orlov Fact II… Dmitry Orlov has never scored a playoff goal in a postseason in which the Caps did not win a Stanley Cup.  His only two career postseason goals came in 2018, when the Caps won the Cup.  He is 0-for-4 in the other four postseasons in which he participated.

Odd Orlov Fact III… This was the second straight season in which he did not record a goal against a Metropolitan Division opponent.  The last time he did score against a Metro opponent was April 1, 2018, when he lit the lamp against Pittsburgh.  In 54 divisional games since then, Orlov is 0-16-16, plus-2 (that’s no goals on 80 shots).

The Caps went into that game against Tampa Bay in a bit of a stagger, going 4-2-2 in their previous eight games, half of them decided in the Gimmick (the Caps splitting the four decisions).  Orlov was in a slump of his own, going without a point over that same eight-game stretch.  Things did not start well for either Orlov or the Caps, who found themselves in an 0-2 hole less than five minutes into the second period.  The teams exchanged goals before the end of the second period, setting up a better finish than one might have predicted for the Caps.  Jakub Vrana scored less than four minutes into the third period to get the Caps within a goal.  And then, with less than nine minutes left in regulation and the Caps on a power play, Orlov found himself manning the spot usually reserved for John Carlson as the power play was winding down.  He took a pass from Travis Boyd at the right point, and then he played a reasonably good fac simile of Carlson, teeing up Alex Ovechkin for a one-timer from the left wing circle that beat goalie Andrei Vasilevskiy cleanly on the short side to tie the game.

That is how the teams went to overtime, and the matter was settled just over three minutes into the extra frame.  Evgeny Kuznetsov started the final sequence by easing back to his own blue line with the puck as the Caps swapped out the other two bodies on the 3-on-3.  He then fed the puck up to Orlov at the Tampa blue line.  He pushed defenseman Victor Hedman back as Tom Wilson made a bee-line for the net down the middle.  With the defensemen frozen and Vasilevskiy perhaps distracted by Wilson’s advance, Orlov snapped a shot past Vasilevskiy’s blocker on the short side, and the Caps had a 4-3 win.

Game to Forget… October 10, 2019.  The early season game in Nashville against the Predators might qualify as the Caps worst of the season.  The Caps had four leads in the game and gave all of them away.  They trailed only once, that being when Nashville scored the game-winning goal with less than five minutes left in regulation for a 6-5 win.  Dmitry Orlov had one of those games that inevitably happens, and not in a good way.  He was on ice for each of the Predators first three game-tying goals, and he would be on the ice for the Preds’ game-winner as well.  He did post an assist, three shots on goal, had two takeaways, a hit, and a blocked shot.  But he was on ice for four goals against, the most damage he witnessed firsthand all season.

Eight games, three points, no goals, minus-1.  What Orlov had – or more accurately, what he didn’t have…production – was something going around the Capitals’ locker room in the postseason.  Since Orlov scored the first goal in Game 4 of the 2018 Eastern Conference final against Tampa Bay, he has gone 23 postseason games without a goal (0-7-7, plus-1).

Dmitry Orlov has three more years on his six-year/$30.6 million contract signed in June 2017. While the $5.1 million cap hit looks expensive, it does not look especially burdensome in a comparable group of defensemen (age 27-33, cap hit of $4.5 to $5.5 million).  What might be of some concern as Orlov embarks on the back half of his contract is that there have been hints of slight erosion in his numbers.  Leaving per-game averages aside, his point totals have dropped by two points in each of the last three years after posting 33 points in 2016-2017.  His shooting percentage has fallen more significantly.  Over a four-year period from 2013-2014 through 2017-2018, it was 6.8 percent.  Over the last two seasons it was 3.4 percent.

The Caps seemed set up to have a solid top-four on defense this season with John Carlson and Michal Kempny as one pair, and Radko Gudas and Dmitry Orlov as another.  Things do not always turn out as planned, though.  Kempny was inconsistent coming off leg surgery, and Gudas did not fulfill his early season promise as a replacement for Matt Niskanen, for whom he was traded to the Caps by Philadelphia.  Orlov had a decent, even typical year, given his history, but the disappointments at other blue line positions diminished his results a bit. Nevertheless, the year he had should have come with little surprise.  After 500 career games with the Caps, there is some clarity about what he brings and what he brought in 2019-2020.