The Peerless Prognosticator is ON THE AIR!!! -- Game 11: Capitals at Penguins, February 7th

First versus 15th.  The Good versus The Bad and the Ugly.  The saints against the sinners.

Four days ago the Pittsburgh Penguins methodically dismantled the Washington Capitals, 6-3, in front of a national television audience.  The Capitals played the Penguins even over the first 26 minutes and change, but starting with a two-goal burst 37 seconds apart in the second period, the Pens outscored the Caps 4-1 over the last 34 minutes.  Chris Kunitz had the first four-goal game against the Caps in more than 16 years.  Ex-Capital Tomas Vokoun notched the win.  Sidney Crosby had a three-point game; Evgeni Malkin had a pair of assists.  If you were a Penguin fan, it was good times.  If you were a Caps fan, not so much.

And that was on Washington ice.

Now the teams meet in a rematch in Pittsburgh.  The first thought that comes to mind is a question… “does the Consol Energy Center scoreboard have the means to display double digits?”

We covered a lot of this matchup in the prognosto from last Sunday.  Not much has happened since then, other than the teams continuing on their respective paths of momentum.  Pittsburgh beat the New York Islanders, 4-2; and the Caps lost to Toronto, 3-2.  What it means is that the Penguins will take Consol Energy Center ice for only the fourth time this season riding a four-game winning streak in which they outscored their opponents by an 18-6 margin.  Meanwhile, the Caps will head on the road for the first time in February having lost two in a row, four of five, and eight of their first ten games. 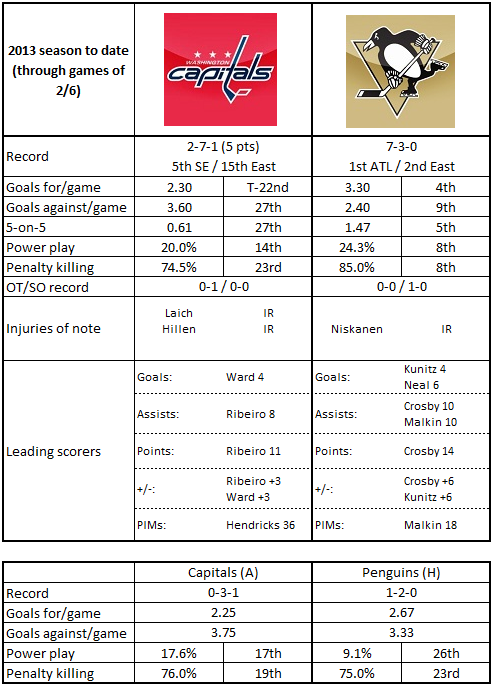 1.  The Caps have suffered from scoring depth problems at forward.  Not so with the Penguins.  Chris Kunitz, James Neal, Sidney Crosby, Pascal Dupuis, and Evgeni Malkin – top six forwards all – have almost as many goals (21) as do the Caps as a team (23).

3.  Sidney Crosby is on a five-game points streak (1-8-9) and has points in eight of the ten games the Penguins have played to date.

4.  Kris Letang is working on a four-game points streak of his own (2-3-5) and has points in seven of the ten games he has played.

5.  Pittsburgh has been a front-runner this season.  They scored the first goal in nine of ten games played so far and have taken a lead to the locker room after 20 minutes a total of eight times.

1.  There is a big hole in Caps scoring at the moment, and only part of it is due to Alex Ovechkin’s drought.  By the time each of Marcus Johansson, Jason Chimera, Mathieu Perreault, and Brooks Laich had played 10 games last season, they had a combined 13 goals.  So far this season: 1.  And Laich has not yet dressed for a game.

2.  The Caps are averaging almost a full goal per game less at even strength (1.40) than the Penguins (2.20).  That alone accounts for the difference in scoring offense between the teams.

3.  Conversely, the Caps are averaging almost a full goal per game more allowed at even strength (2.30) than are the Penguins (1.50).

4.  The Caps are doing reasonably well on the power play (they rank 14th at 20.0 percent), but it is not making much of a difference.  Why?  Well, one reason might be that they are fourth in the league in power plays in the third period.  They come too late to make a difference?

The most important number the Caps might need to be concerned about with the Penguins is this: 7.4.  Through ten games, Evgeni Malkin has two goals on 27 shots, a 7.4 percent shooting percentage.  He is 8-23-31 in 21 career games against the Caps, 12 of those points coming on power plays.

He is the straw that has not yet stirred the drink on offense, but there is another troubling number creeping into his stat line.  He is close to setting a career penalty minutes pace.  He is tied for the team lead in minor penalties (five) and is on a pace for 82 minutes per 82 games.  His career high in PIMs is 89 in 72 games in 2009-2010.  If the Caps need to play more disciplined, Ovechkin needs to be a part of that.

1.  Don’t let one become two.  Pittsburgh is going to score.  But the Caps cannot let them add to their total in quick fashion.  The 37 seconds between goals in the game on Sunday (not to mention the iffy nature of them from a goaltending standpoint) sucked all the air out of the Caps’ bench.

2.  Move the puck.  Pittsburgh’s game is predicated on not spending time in their own end.  The get the puck, and they move it smartly.  The Caps have to throw that idea right back in their face.  The Penguins play their game with a forward lean; the Caps need to make them play on their heels.

3.  Put the “strength” in full strength.  The Caps have been an abominable team at full and even strength.  Only Edmonton, Florida, and Columbus are worse at 5-on-5.  If the Caps play to their trend in this statistic, this game is going to be over before the first intermission.

In the end, on paper this game is not close.  The Penguins are good, and they are hot.  The Capitals are neither.

Games are not played on paper.