The Peerless Prognosticator is ON THE AIR!!! -- Game 3: Blackhawks at Capitals, October 15

The last time that the Washington Capitals and the Chicago Blackhawks met on the ice, 42,832 fans took in one of the most thrilling games of the season, a 3-2 Caps victory at Nationals Park in the Bridgestone Winter Classic.  The winning goal was scored by Troy Brouwer with just 12.9 seconds left in regulation, and Braden Holtby stopped a Patrick Kane drive with one second left to clinch the victory.

It was arguably the high point of the Capitals’ season.  For the Blackhawks, it was far from it.  In June, they skated the Stanley Cup around United Center for their third championship in six seasons and sixth in club history.

The defending champions visit Verizon Center on Thursday night, jetting in from Philadelphia, where they meet the Flyers on Wednesday night.  Chicago stumbled out of the gate, allowing three first period goals and dropping their season opener to the New York Rangers, 3-2, perhaps a bit distracted from the hoopla that goes with another banner raising for the champs.

The Blackhawks put that loss behind them in short order, spoiling the New York Islanders’ first home game at Barclays Center in Brooklyn, then finishing off the Islanders in their home-and-home set, 4-1, last Saturday.

Fans are well acquainted with the core of the Blackhawks – Jonathan Toews, Patrick Kane, and Duncan Keith.  However, Chicago is not being shy about giving youngsters a chance at contributing from responsible positions.  The salary cap demands that the Blackhawks – or any successful team – find a way to integrate younger players into productive roles, and Chicago is having success doing that in the early going.  Teuvo Teravainen, an 18th overall draft pick in 2012 who had four goals and ten points in 18 playoff games last spring, is picking up where he left off last June with a goal and an assist in three games.

Then there is Trevor van Riemsdyk.  The younger brother of James van Riemsdyk of the Toronto Maple Leafs, Trevor went undrafted, playing instead for three years with the University of New Hampshire.  He was signed to a two-year entry level deal by the Blackhawks last July and made the parent club out of training camp.  He has rewarded that vision early on with a goal and an assist in three games, his goal coming on the only shot on goal he has recorded to date.

With the Blackhawks playing Wednesday night in Philadelphia, it is not certain who would get the call in goal for the Blackhawks.  Corey Crawford has split two decisions while posting a save percentage of .921.  What he does not have is much success against Washington.  He is 2-3-1, 3.52, .883 in six career appearances against the Caps, and he has never won in Washington (0-2-1, 4.06, .887).

Backup Scott Darling is, if nothing else, capable of blocking out the sun, a linebacker-sized goaltender (he is 6’6”, 232).  He won in his only start this season, stopping 28 of 29 shots in a 4-1 win over the New York Islanders last Saturday.  He has only 15 career appearances in the NHL, none of them against the Capitals.

Here is how the teams compared in last year’s numbers: 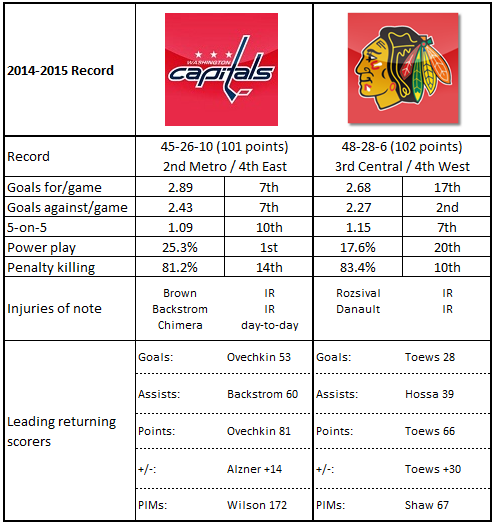 1. Chicago has three Stanley Cups in the last six seasons, but they do not have the most regular season wins over that six-year span.  They have 273 wins (through Tuesday's games), while the Pittsburgh Penguins have 277 (and no Stanley Cups).

2.  Patrick Kane is now his ninth season in the NHL, and he is climbing the charts of all-time Blackhawk scorers.  He currently ranks ninth in points in franchise history (563), just 33 points behind Jeremy Roenick (596 points).  If he records points at approximately his per-game pace over his career (0.97) he would challenge for sixth place on that list if he plays in 82 games this season.  That spot is currently held by Dennis Hull (640 points).

3.  Likewise, Jonathan Toews is highly ranked on the franchise list of goal scorers.  He is currently 13th on the list with 223 goals and could tie or overtake Doug Wilson for 12th place with a big effort on Thursday (225 goals).  With an “average” year in terms of goals per game, he could challenge Bill Moisienko for eighth place on the Blackhawk goal-scoring list (258) before the season is over.

4.  Chicago is one of just five teams who have yet to record a goal scored at 5-on-4 this season.  Their two power play strikes were on a 5-on-3 advantage and a 4-on-3 advantage.

1.  If Alex Ovechkin plays, and if he gets three points he will reach the 900-point mark for his career, extending his franchise record for points.  His 897 points is currently 11th among active players in career points, one behind Arizona’s Shane Doan for 10th place.

5.  It is perhaps reading too much in the third game of the season, but the Caps have not won a Game 3 of any season in regulation time since the 2008-2009 season (5-1 over the Vancouver Canucks).

Where do they find these guys?  Left wing Patrick Sharp went off to Dallas in free agency, and Artemi Panarin – signed by the Blackhawks out of the KHL on a two-year entry-level deal last April – steps in on the left side, scores the game-winning goal in the season opener and is second on the team in points through three games (2-2-4).  Panarin is something of a late bloomer, or was an under-the-radar player as an amateur.  He went undrafted by any NHL club and did not have an especially noticeable record with Chekhov Vitaz in parts of five seasons in the KHL (29-45-74 in 143 games).  However, in two full seasons with St. Petersburg he lit up the scoreboard, going 46-56-102 in 105 games, leading to his signing by the Blackhawks.  This will be his first meeting against the Capitals.

Okay, it’s only two games, but T.J. Oshie does not yet have a point for his new club. We know he is going to be fine over the 82-game season, and the top line was broken up in Game 2 against the San Jose Sharks because of Alex Ovechkin’s absence from the lineup for personal reasons.  And as early as it is, there are only five Caps with goals and nine with points.  Still, Oshie leads the team in shots with nothing to show for it (although he is not close to having the most shots on goal without a goal; there are 17 players in front of him in shots on goal without a goal through Tuesday’s games).  It would be nice to celebrate a first point/first goal on Thursday.  Oshie is 5-19-24 in 33 career games against Chicago.

The opening of the season for the Caps is something of a double-edged sword.  On one side is the fact that they are opening with four home games.  On the other is the fact that they get a couple of tough ones in the middle of that home stand.  The Caps did sweep the two-game series against the Blackhawks last season, both by 3-2 margins.  Further, the Caps have not lost to Chicago in Washington since January 2006 (a 4-3 overtime loss), and they have not lost to the Blackhawks in regulation time on home ice since March 2004 (a 4-3 loss).  It is not a long winning streak (four games), but it is better than a lot of teams can say.

The Capitals got a glimpse on Tuesday of what life would be like without their top two forwards in the lineup. It was not pleasant.  Part of it was missing the players, part of it was two new guys – Justin Williams and Oshie – still integrating themselves into the Caps’ systems, and part of it was just poor play from too many players who did not have an excuse.  Not that there will be any mercy shown by the Blackhawks, but the Caps do have some success at their expense in recent years, especially on home ice.  With Backstrom likely to be out at least one more game and Ovechkin’s status uncertain (though he is expected to play), this game could be a defensive struggle.  The Caps won the last two meetings between the clubs by a 3-2 margin.  Sounds good enough for us.