The Hershey Bears won tonight, defeating the Wilkes-Barre/Scranton Penguins 3-0 to force a Game 7 on Tuesday night. The series between parent and affiliate have pursued similar paths... 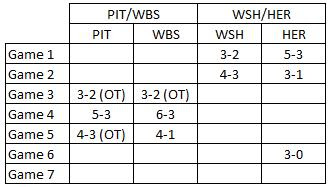 Posted by The Peerless at 7:39 PM No comments: 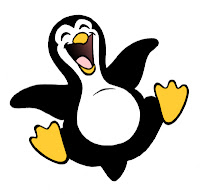 So, here we are after five games of this entertaining – in a car wreck sort of way, if you’re a Capitals fan – series with the Penguins, and in an odd way, the Caps lead it, four games to one. “How so, Mr. Peerless,” you ask?

Well, four games have ended with the winning goals scored off Capitals’ sticks. Twice, they resulted in finishes that had the Caps with more goals on the scoreboard than the Penguins had, and twice they resulted in the opposite. That “opposite” ending crushed a late comeback by the Caps as they lost Game 5 to the Penguins in overtime, 4-3, on a goal scored when a shot by Evgeni Malkin was deflected by a lunging Tom Poti, trying to block the shot, and through goalie Semyon Varlamov’s pads with one second remaining on a Penguin power play.

About that power play. Let’s get this out of the way… the call putting the Penguins on the man advantage was the correct one. Malkin was carrying the puck to the Caps net – something seen rarely from the Caps on this night – and was tripped by Milan Jurcina. If the play happens at the other end of the ice, it might not be called. But when it occurs in the midst of a scoring opportunity, it is a call that has to be made.

A trip, a deflection… for the newest generation of Caps fans, welcome to our hell. Those of us who have been Caps fans for more years than mental health specialists would consider healthy, it is the latest insult to our sense of even-handedness and fair play from Fate. From Lafontaine’s post ringer, to Verbeek’s skate on Langway’s leg, to Nedved’s floater, to Tikkanen’s open net whiff, to Jason Doig hopping off the bench too early in a third overtime, we’ve seen it all… and we see nothing that surprises us when it comes to this franchise’s unique talent for losing playoff games in the most heart-wrenching ways.

No Caps fan over the last 25 years would read that last paragraph and not know the situations of which we write… they can probably still see all of them in their minds.

But the Caps certainly had their chances…

- The Caps had eight shots on goal before the Penguins registered their first, 5:16 into the first period. None of those eight shots found the back of the net. It is worth noting that the Caps would record only 23 more shots in the last 59:04 of the game, including overtime. We keep pounding on this. Marc-Andre Fleury is the second best goaltender in this series – by quite a margin. He has not come close to stealing a game. But if the Caps aren’t going to test him, then he’s going to escape to another round.

- The Caps were treated to, if not a bad night by Sidney Crosby, then an inconsequential one. No points, 9-for-23 in the circle, and a minus-2. He’s not going to have many nights like that. A lot of that, though, was a product of the play of Boyd Gordon.

- Before the overtime penalty, before the game-winning deflection, David Steckel had the game on his stick 18 seconds into overtime and an open net in front of him with Fleury on the ice swimming desperately for shore. If his shot is six inches more to the inside, six inches higher, it is the Penguins facing elimination this morning… see all the years of this you’ve missed, young Caps fans?

- To the winners go the stars, apparently, who had to have been picked by the Versus studio guys. The best two players on the ice on this night, in order, were Nicklas Backstrom and Alex Ovechkin. In two years of watching him, I don’t think I’ve ever seen Backstrom play with such singular purpose. He didn’t lack for effort or intensity on any shift. Even though he was on the ice on the Ruslan Fedotenko goal that tied the game early in the third period, he played Malkin into dropping a pass for Fedotenko – he was the only forward back.

- We said it in the pregame, and we believe it still… this series hasn’t turned and won’t turn on the play of the stars. Ovechkin had a big night for the Caps with a pair of goals, Backstrom had another. It is the support guys that will tell the tale here. Fedotenko roofing one off the crossbar and in from long range sucked the air out of the building early in the third. And if there is an unsung hero for either team in this series, it is Rob Scuderi. Even though he was on the ice for two Capitals goals, he has blunted many an Ovechkin rush in this series, usually with a well timed poke check.

- The Caps have two very skilled wingers in Alex Ovechkin and Alexander Semin (although it would be hard for someone watching hockey for the first time in this series to see just what skills Semin has). They’d like to think they have another skilled winger in Tomas Fleischmann. No shots, no points, no hits, no takeaways. He doesn’t have a point since the game-winning goal in Game 1 and hasn’t had a shot on goal in either of the last two games (both losses).

- If one is going to excuse Fleischmann’s performance, it would be on the basis of youth and inexperience. But while he’s done a good job of lugging the puck into the offensive zone to get things started, the Caps have gotten almost no production out of Viktor Kozlov (two assists in the series, only one shot on goal in each of the last three games).

- Mike Green has to be injured. If one watches him taking shots, that’s about all one can conclude. The lollipops he’s sending up there wouldn’t dent tissue. It also seems to be affecting his play in the corners, where he’s turning away from hits, and in carrying the puck, which has been, as a NASCAR driver might put it, “loose in the turns.”

For the series to return to Washington, this can’t just be The Alex Ovechkin Show for the Caps. Not all the time, anyway. Nicklas Backstrom stepped up in a big way last night. In his own way, so did Boyd Gordon, who played a fine game against Crosby. Semyon Varlamov’s record will show that he allowed four goals, but he was for the most part brilliant.

However, the Penguins have gotten more from their “support” players than have the Caps, and in that respect, Pittsburgh has been the better team in this series. It has been the difference. If the Caps don’t find a way to reverse that, then we’ve seen our last game at Verizon Center this year.

If the series does not return to Verizon Center for a Game 7, it will mark the third consecutive time that the Caps’ home season will have ended on an overtime power play goal for the opponent – Martin St. Louis (in a third overtime in 2003), Joffrey Lopul (2008), and Evgeni Malkin (2009).

The burden we bear as Caps fans.
Posted by The Peerless at 10:00 AM 5 comments: