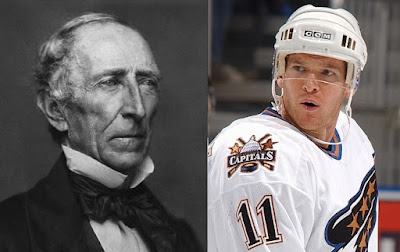 John Tyler was the tenth President of the United States.  And an unlikely one he was, at least in the timing of his assuming the office.  He succeeded William Henry Harrison upon his death on April 4, 1841, just one month after Harrison was inaugurated.  It was not the easiest transition to make for Tyler.  Quite the opposite, Tyler took office in a very difficult period of American history, and in that regard, he might be compared to a Washington Capital who was named captain during a difficult period in franchise history: Jeff Halpern.

Tyler was the first President to have been born after the United States Constitution was ratified, having been born in 1790 (the Constitution was ratified in 1788).  Born in Virginia and educated at the College of William and Mary, he studied law and was admitted to the bar of the Commonwealth of Virginia at the age of 19.  It was politics that would be his future, though.  He was elected to the Virginia House of Delegates at age 21 and served there for five years.  That would be but the first step on a path that would lead him to the White House.  That path took him to the United States House of Representatives, where he served for four years.

Finding service in the House unsatisfying, he returned home to practice law, but it didn’t take.  He returned to the House of Delegates, and two years later was appointed Governor by the legislature (Virginia did not have popular election of governors at the time).  After serving a second one-year term in what was a constitutionally weak office he was appointed to the United States Senate.  He served nine years in that position, often finding himself at odds with members of his own party, including President Andrew Jackson, mostly over economic issues such as tariffs and infrastructure initiatives.  The conflicts between Tyler and his colleagues grew to the point at which remaining in the Senate was an untenable position.  He resigned his seat in February 1836 to return to private life once more.

That didn’t take, either, and he was on the national ticket as a candidate for Vice President under the Whig Party banner.  He lost that election, but in 1840 he would be elected Vice President with William Henry Harrison at the top of the winning ticket.

Jeff Halpern was the first Capital to have been born in Maryland.  Opportunities for developing as a hockey player in Maryland being somewhat difficult to find, he ended up in New Hampshire where he attended preparatory school and developed his hockey talents.  From there it was on to Princeton University where he played for four years.  After posting 50 goals in 69 games for the Tigers over his last two seasons, he was signed as a free agent by the Capitals in March 1999.

Halpern made the parent club out of training camp for the 1999-2000 season and became a reliable two-way player.  He earned Calder Trophy votes as the league’s top rookie in 2000 (finishing 12th), and twice in his first four seasons he received votes for the Selke Trophy as the league’s top defensive forward.  Over his first five seasons with the Caps, Halpern played in more games than any other Capitals (368) and scored 76 goals (fourth over that period).  Only Peter Bondra scored more game-winning goals (29) than did Halpern (14), and only Bondra had more shorthanded goals (10) than Halpern (7).

However, things were not going well during this period, either for the Caps or, as it turned out, the league.  The Caps engaged in a slow slide out of a group of competitive teams.  Finishing with 44 wins and 102 points in Halpern’s rookie season, the Caps would win only 23 games and finish with 59 points in 2004-2004.  Off the ice, labor-management troubles led to a lockout that left the league dark for an entire season.  When the differences were settled, the Caps returned the ice for the 2005-2006 season with Halpern as the 12th captain in team history.

John Tyler’s tenure as President was rocky, to say the least.  It started early with a veto of a banking bill, the result of which was the Whig Party expelling Tyler as a member and much of Tyler’s cabinet resigning.  Later, a tariff bill was met by a veto, and the result of that action was the first impeachment resolution against a sitting President introduced in the House of Representatives.  Vetoes, exercised rarely by Presidents before Tyler (with the notable exception of Andrew Jackson, who vetoed 12 bills), were a common theme in the Tyler administration.  He vetoed 10 bills in his almost four years in office and became the first President to have a veto overridden, that of an appropriations bill on Tyler’s next to last day in office in 1845 (he dropped out of the race for re-election the previous August).

Jeff Halpern’s tenure as captain for the Capitals was rocky in a different sort of way.  Coming out of the 2004-2005 lockout, one could not know just how bad the Caps would be, but folks knew they would be bad.  The club sold off most of its aging assets in the last season before the lockout and, even with rookie Alex Ovechkin making his debut with the club, it was a young team thin on talent.  On a team that won just 29 games and finished with 70 points, Halpern was solid, though.  In 70 games he averaged 20 minutes a game in ice time for the first time in his career, and he was third on the team in points (44) having to play a scoring line role instead of a two-way defensive stopper role for which he might have been better suited.

Despite his turbulent tenure, Tyler did enjoy what were viewed as successes with far-reaching consequences, such as approval of the annexation of Texas, expansion toward the Pacific Ocean, and treaties with China and Canada, the latter settling a matter of some dispute over where the border between Maine and Canada was located.

In his year as Capitals captain, Jeff Halpern served as a veteran influence over a young Capitals squad that included Ovechkin, Brooks Laich, Mike Green, Boyd Gordon, and Tomas Fleischmann, players who would make contributions to the club in their climb back to competitiveness after Halpern left the following season to sign as a free agent with the Dallas Stars.

Two individuals presiding over difficult times, coming upon their offices in somewhat unconventional ways, representing “firsts” in their respective histories, John Tyler and Jeff Halpern are the latest pair linked in this trip down memory lane.