The Peerless Prognosticator is ON THE AIR!!! -- Game 1: Washington at Tampa Bay, January 19th

January 19, 2013… Opening Night for the National Hockey League.  Never would have believed it if I didn’t see it with my own eyes.

Well, the cousins – Cheerless and Fearless, respectively – have joined us for this Opening Night edition of TPP.  Are you guys excited?

"As excited as a bird seeing the first worm of the morning."

"Although I do not share our cousin’s affection for Lumbricus terrestris, but I am thrilled that the boys are back on the rink."

Well, let’s get right to it.  Tonight’s opponent – the Tampa Bay Lightning – had the worst scoring defense in the league last year by miles, giving up 3.39 goals per game, almost a quarter-goal per game more than the 29th place Toronto Maple Leafs (3.16).

Uh, yeah… As we were saying, Tampa allowed goals at a clip unmatched by any other NHL team last season.  This did not escape the notice of Bolts general manager Steve Yzerman.  Tampa Bay signed free agent defensemen Matt Carle, Sami Salo, and Matt Taormina (on injured reserve), and Skippy the Wonder Defenseman.  Anders Lindback was pried away from under the shadow of Pekka Rinne in Nashville to presumably assume the number one job in Tampa, although head coach Guy Boucher (being Guy Boucher) has not settled on a goalie for the opener.

One supposes it’s all psychological.

The Lightning might have redecorated the blue line and the crease, but the same heavy duty appliances are in the kitchen.  Steven Stamkos, Martin St. Louis, and Vincent Lecavalier accounted for 107 of the Lightning’s 232 goals last season.  The flip side of that coin is that 26 other skaters accounted for 125 goals, hardly an offensive juggernaut (the Lightning finished ninth in scoring offense).  Here is how the two teams finished up last year, numbers-wise: 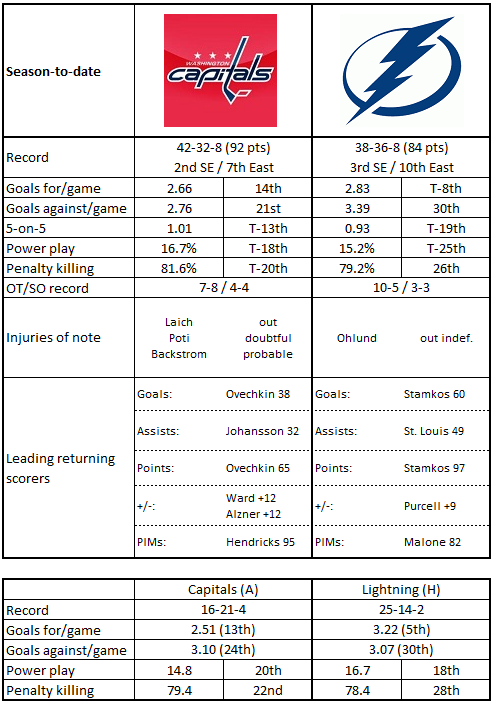 5.  Tampa Bay led the league in overtime goals scored last season (10).  Half of them were scored by Stamkos.

1.  Braden Holtby gets the start in goal for the Caps.  He comes into the game having played well for Hershey in the AHL.  He is fifth in the AHL goals against average, third in save percentage, third in shutouts.

2.  The Caps would like to tighten up their second period defense this season.  Only three teams allowed more second period goals than the Caps last season (Chicago, Toronto, and Tampa Bay).

3.  Washington had a better winning percentage last season when being out-shot (.510) than they had when outshooting their opponent (.500).  Relax, it was not uncommon; in fact, 19 teams finished that way.

4.  Of returning defensemen, John Carlson had almost as many goals scored last season (nine) as the rest of the defensemen combined (ten).

5.  One reason the Caps might be entertaining the idea of Alex Ovechkin killing penalties… only two teams had fewer shorthanded goals than the Caps’ three such tallies last season (Detroit, Tampa Bay).

For the Caps it is all about the start.  There just is not any time for a lengthy shakedown cruise under new head coach Adam Oates.  And there is no time for a long break-in period for the Caps’ new center to complement Nicklas Backstrom.  Last season with Dallas he was 1-6-7 in 13 games in October.  He was 4-12-16 in 16 games in January.  The Caps could use a “January” January out of Ribeiro, not an “October” one.  This might not be the best team for Ribeiro to start against; in 17 career games against the Lightning he is 3-6-9, minus-9 (none played against Tampa Bay last season).

1.  Don’t be pecked to death by ducks.  Steven Stamkos will get his goals this season.  He might even light the lamp in this game.  What the Caps cannot allow themselves is to be beaten by the Nate Thompson’s or the Benoit Pouliot’s of the world.  That is where the Caps would be asking for trouble in this game.

2.  Pressure.  Anders Lindback had 13 decisions with Nashiville last season. In six of them he faced fewer than 25 shots on goal.  Overall he faced only 27.6 shots per 60 minutes; if he was his own team he would have finished with the sixth lowest shots on goal against in the league.  Let’s see how he does behind an iffy defense and more shots faced.

3.  1+3+1 = 1 (or more).   The Caps had a disappointing power play last season, finishing with a road record of 14.8 percent (20TH).  Only six teams had fewer road power play goals than the 18 scored by the Caps.  New coach, new approach.  The Caps will need more success on the man advantage this season to cement a playoff spot.

In the end, it has been a long time in coming, but the anticipation ends now.  There is no time to bask in the “Opening Night” hoopla.  It is time to get down to business.  The Caps ran off seven straight wins to start the 2011-2012 campaign, including a 6-5 Gimmick win against the Lightning in Game 2 of the season.  On that night the Caps came from behind four times before winning in the trick shot phase.  One hopes it does not come down to that this evening, but two points ugly is no different than two points elegantly.