Today's "oops" comes by way of Newark, where the New Jersey Devils will christen their new palace -- The Prudential Center -- on October 27th.

The "oops" comes in the form of what you see below, from the Devils' web site: 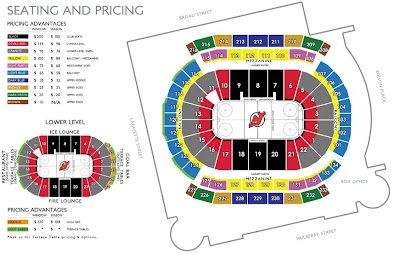 You've probably noticed that the arena is cheek-by-jowl with several thoroughfares. Apparently, this hasn't escaped notice of some officials in the city. Said Newark Police Director Garry McCarthy:

"You can't construct an arena and put it right against a street in a post 9/11 world. So, we're playing catch up and taking measure to make sure it's safe."

One would think that if there was any place in the country that would be sensitive to such concerns, it would be the New York metropolitan area. Having broken ground on this facility four years after 9/11 -- October 2005 -- the lack of adequate security planning (implicit in McCarthy's comments) seems incomprehensible.

I suppose one could make the case that Verizon Center is similarly situated among a host of surface streets, but that facility was opened in 1997. You can't construct an arena and put it right against a street these days?...oh, yes you can. It doesn't make it look any less bizarre.

Posted by The Peerless at 1:31 PM No comments:

It isn’t bad enough that hockey in general suffers some pretty grim TV numbers, but some local fans are getting royally hosed in trying just to watch their hometown heroes. Amid the jumble of cable providers in this area, we have Cox Communications, which apparently does not (as of this writing) provide Comcast Sports Net+ nor Comcast Sports Net in HD, part of the Comcast SportsNet local broadcast partnership that shows Washington Capitals games.

Whatever corporate battle might be at work here between the two communications behemoths (compared to the consumer, they’re all behemoths), the bottom line for a lot of faithful Caps fans is that they might not have access to their team for up to 17 games this season, beginning with tomorrow’s contest against the Buffalo Sabres. And for a club that is longing to expand its fan community, not to mention a loyal segment of that community that would be thrilled to see those games on TV, it is an important issue.

A perusal of The Official indicates that Cox is at least creating the appearance of listening to requests to work out an arrangement to renew its programming agreement with Comcast SportsNet. Even the big guy has gotten involved, to his credit (one hopes that what he's been led to believe comes to pass). However, Comcast SportsNet is reporting that while it will carry the game on its Comcast SportsNet+ station, Cox will be the only cable/satellite provider in the Washington region not carrying the broadcast.

We think someone is missing the boat, here…as in, this ship is about to sail and it might be a good thing to get on it. For the first time in several seasons, the Capitals have a legitimate shot at some real regular season success and a playoff berth. Marry that to the buzz of new players and a new look, not to mention perhaps the single most dynamic athlete in this area in Alexander Ovechkin, and it is a team that has its best chance in years to re-stake a claim to a significant segment of the Washington sports fan population. Would not a provider want to take advantage of that?...perhaps even while still negotiating a programming agreement?

While there is a commercial issue between these providers, there is a “goodwill” issue here, too. It doesn’t appear to make a great deal of sense to antagonize an entire group of customers on the basis of a negotiating chip such as this, especially since carrying the station on Cox apparently costs them nothing.

Say it loud, say it proud…We want our Caps!

And do it fast!...Tomorrow's game is the first one that Cox subscribers will miss, and the clock is ticking.

Thanks to LoveMyCaps on The Official for shedding the light on this.
Posted by The Peerless at 12:03 PM 2 comments:

No, it is not the latest thriller to hit the big screen, it is the language in the contract Jaromir Jagr signed in 2001 that could put the Caps on the hook for a portion of his salary with the Rangers next year. As Tarik El-Bashir reports in today's Post, the option could be triggered by the Rangers if any of the following were to occur:


-- If the Rangers win a playoff round this season and Jagr scores 40 goals during the regular season.

Jagr could conceivably reach every standard this year. However, the tricky parts lurk in the first two standards...the use of the word "and." Could Jagr score 40 goals in the regular season and the Rangers win a playoff round? Certainly. Is it likely? The Peerless thinks 40 goals will be a stretch.


Could the Rangers win a playoff round and Jagr score 84 points? Definitely. But is it likely? Barring injury, this seems to be where the trigger will be pulled on the option. In his last 14 seasons, Jagr has never scored fewer than 94 points in a full season (he had 70 in the 48-game season of 1994-95)...well, except in any season in which he played for the Caps.


The option might give him the comfort to add to such tender moments as these that he has experienced through his career... 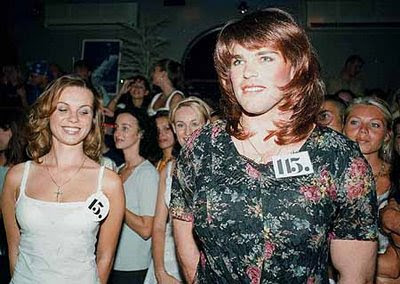 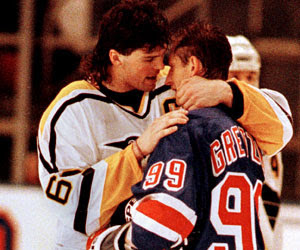 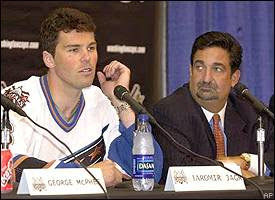 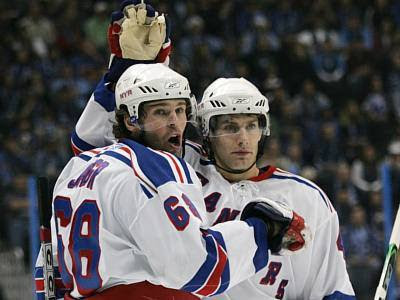 ...or at least give him the chance to stock his shelves... 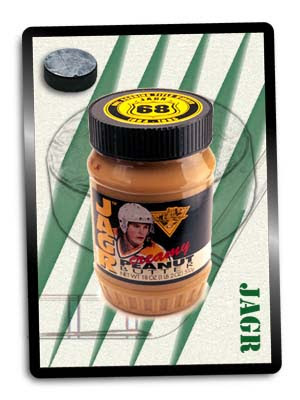 This weekend the Capitals are off to Manhattan and Buffalo for back-to-back games to complete their tour of the Empire State this week. Tonight, it’s the Rangers hosting the Caps. A preseason favorite to win the Stanley Cup (or so says Larry Brooks), the Rangers are in the midst of working out how to fit $14.4 million worth of new centers’ payroll this year into the lineup. It hasn’t gone well, but it’s only three games, too. Let’s let our old pal Larry tell it…

“The Rangers haven't gotten their offensive game going collectively or individually, though last night's final 30 minutes were [Scott] Gomez's best yet. But at the same time, [Chris] Drury seems to have as little chemistry with [Jaromir] Jagr through three games as Gomez did with No. 68 in two exhibition games. [Brendan] Shanahan has looked slow on the trigger. [Martin] Straka isn't sharp.”

Caps fans will hardly be surprised that once again, it’s an episode of “It’s All About Jags.” The Rangers have only six goals through their three games (a 1-2-0 record), and Jaromir Jagr has none of them. Neither does Scott Gomez (about half the $14.4 million investment for this year noted above). In fact, in getting more than 20 minutes a game, on average, over the first three games, he has not yet registered a point as a Ranger. Chris Drury, on the other hand (the other half of the Rangers’ investment in centers), is tied for the team lead in points (with defenseman Marek Malik) with three. It is worth noting that Brendan Shanahan is off to a slow start as well, having registered no points in his first three games, but it hasn’t kept him from calling on teammates to remain positive.

Fortunately for the Rangers, Henrik Lundqvist is picking up where he left off last season. He’s allowed two goals in each of his three starts, while turning away 80 shots in those three games (.935 save percentage).

Here is the stat to watch: 0-for-15. That is the Ranger power play so far.

Buffalo has the same 1-2-0 record as the Rangers, having pasted Atlanta, 6-0 last night, for their first win. Whereas the Rangers have had some trouble getting their offense out of the gate, the trouble with the Sabres has been defense and goaltending. If there is a silver lining in the wisp of a gray cloud, there having been only three games played by the Sabres thus far, it is that the Sabres have given up six, three, and no goals in successive games. That counts as progress. But still, even with last night’s shutout of Atlanta (and don’t they suck on toast so far?), Ryan Miller’s .885 save percentage is 30 points below his career number. For Miller, though, it hasn’t been an easy time off the ice.

Among the skaters, the scoring is led by a pair of defensemen – Brian Campbell (1-4-5) and Jaroslav Spacek (2-2-4). But Mr. Offer Sheet – Thomas Vanek – has stumbled out of the gate with only a single goal to note on his season score sheet so far. If there is good news for the Sabres, it is in the person of Tim Connolly who, coming into this season, missed 181 games to injury (concussions, primarily) over the past three seasons. He is tied with Spacek in scoring (1-3-4). The Sabres need him healthy and performing well to help offset the loss of centers Daniel Briere and Chris Drury to free agency.

The stat to watch: 78.6. That is the Sabres’ home penalty killing number so far, good for 19th in the league. That sounds better than is it, seeing as five teams haven’t yet had their home opener.

For the Caps, 3-0 is nice, but that leaves 79 games to fret about. For the moment, though, the Caps find themselves at or near the top in a number of team measures, including: goals against (tied for first), five-on-five ratio (tied for second), penalty killing (tied for first), fewest times shorthanded (tied for third), and team plus-minus (tied for fifth). The team save percentage of .976 isn’t too shabby, either.

The Caps find themselves facing an upgrade – at least on paper – in the quality of teams they are facing this weekend. But for now, the Caps’ play is worth singing about…

I wanna skate hard in a city, that doesn’t sleep
And find I’m king of the hill - top of the heap

These power play blues, are melting away
We’ll make a brand new start of it - in old New York
If we can win up there, we’ll win them anywhere
The Caps will beat – New York, New York

New York, New York
I want to wake up in a city that never sleeps
And find I’m A-number one, top of the list, king of the hill
A-number one

These power play blues, are melting away
We’ll make a brand new start of it - in old New York
And if we can win up there, we’ll win them anywhere
The Caps will beat - New York, New York

See you next week.
Posted by The Peerless at 6:57 AM No comments: