Scribbles: Looking Back Ten Years at the Washington Capitals 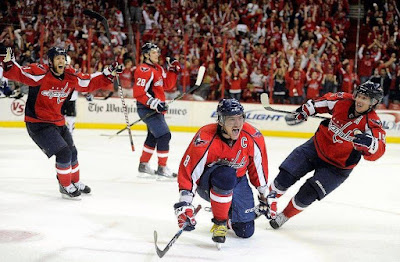 Ten years ago, the Washington Capitals were on a journey from the desert of also-ran status in the NHL standings for three straight seasons to the promised land of the playoffs.  It was an intoxicating period in team history, the “Young Guns” – Alex Ovechkin, Nicklas Backstrom, Mike Green, and Alexander Semin – coming of age and learning how to win in the NHL.  It was a time worth looking back on as the Caps lean into their stretch run this season.  Think about it…

-- Through 53 games this season, Alex Ovechkin has 26 assists.  Ten years ago at the same mark, he had 27 helpers.  The difference is that this year he has 32 goals – a league-leading total.  But ten years ago at the 53-game mark he had 43 goals and would score another 22 in his last 29 games (17 in his last 17 contests) to set a record that still stands for left wingers in the NHL of 65 goals.

-- This year’s Caps have four players with more than 40 points – Ovechkin, Backstrom, Evgeny Kuznetsov, and John Carlson.  Back then, they had only two – Ovechkin (70) and Backstrom (42).

-- Mike Green had 32 points at the 53-game mark to lead all defensemen.  John Carlson has 41 points on this year’s squad through 53 games.  This year’s squad already has five defensemen in double digits in points (Carlson, Dmitry Orlov, Matt Niskanen, Christian Djoos, and Madison Bowey).  The 2007-2008 team at the same point had only four (Green, Brian Pothier, Tom Poti, and Jeff Schultz).

-- Penalty minutes were spread a bit more liberally back then.  The Caps had three players with 50 or more penalty minutes at the 53-game mark of the 2007-2008 season: Donald Brashear, John Erskine, and Green.  This year, only Tom Wilson tops 50 minutes, but he has almost as many (127) and Brashear and Erskine had, combined, back then (134).

Think of it as an exercise in answering the question of whether the glass is half-full or half-empty.  If you are in the half-empty category, you might be thinking that after ten years and the disappointments of the last two years especially, the window is falling shut with an uncertain future ahead for the Caps’ and hopes for playoff success.  If half-full, you might think the Caps have come a long way and still have some life left in them as they try to fulfill the goal of winning a Stanley Cup.  Either way, it's been quite a trip.

Posted by The Peerless at 7:14 AM No comments: