Having taken a look back at the Caps' history in the draft under this administration (from 1997 forward), we thought we'd compare that to another club, one which has something of a reputation for finding gold nuggets in later rounds -- the Detroit Red Wings. So, here's the tale of that tape... 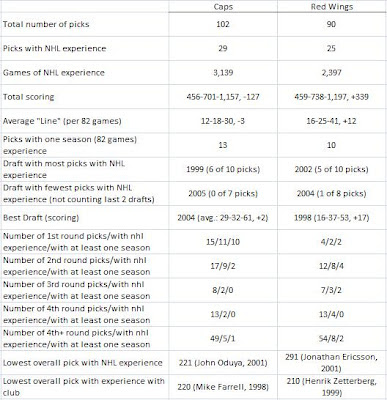 There are some other things to note in the comparison:

-- The Wings have had only one player drafted in the last five drafts who has at least one full season's worth of experience (Johan Franzen, 2004 -- 221 games). The Caps have four -- Nicklas Backstrom, Alex Ovechkin, Mike Green, and Jeff Schultz. All four players for the Caps are first round picks. The Wings have had only two first round draft picks over those five years (Brendan Smith, Jakub Kindl).

-- The Wings do have more success in picking talent in later rounds. After the second round, the Wings have had 74 picks. 15 have NHL experience, and four have at least one full season's worth (Johan Franzen, Valtteri Filppula, Henrik Zetterberg, and Pavel Datsyuk). By way of comparison, the Caps have had 70 picks after the second round, nine of whom have some NHL experience. Only one -- John Oduya -- has more than a full season's worth of games under his belt, none of them with Washington.

-- Frankly, we are surprised (pleasantly so) that the Caps compete with the Red Wings in the draft to the extent they do, given Detroit's reputation in this area, at least at a high-level. However, the Red Wings have lacked high picks over the last decade (16 first or second round picks since 1997, versus 32 for Washington).

One of the sturdy pillars of the game plan for the Caps to sustain a competitive edge is the draft. That has been the aim since the lockout. As we go forward toward Friday night, it bears remembering that this is not an easy task -- trying to project how 18-year old young men might perform three, five, ten years from now. And even the best have an uneven record in performing this task.
Posted by The Peerless at 9:16 PM No comments:

As we head to the draft...some history

We’re in the home stretch for the draft, and it’s time to look ahead. We do that first by looking back with some quick facts about Capitals drafting in this administration. Here’s the tale of the tape…

Total number of picks having played in NHL: 29

Number of picks with at least one season (>=82 games) experience: 13

Draft with most picks with NHL experience: 1999 (six of ten picks)

Draft with fewest number of picks with NHL experience: 2005 (none of seven picks; we do not count the last two drafts)

Number of 1st round picks/with NHL experience/with at least one season: 15/11/10

Number of 2nd round picks/with NHL experience/with at least one season: 17/9/2

Number of 3nd round picks/with NHL experience/with at least one season: 8/2/0

Number of 4th round picks/with NHL experience/with at least one season: 13/2/0

Number of 4th+ round picks/with NHL experience/with at least one season: 49/5/1

As we inch toward Friday night, it might be useful to keep this history in mind.

Caps in the trophy voting

Alex Ovechkin won four trophies and was named a first-team all star, Bruce Boudreau won one award, Nicklas Backstrom was a finalist for another (finishing second to Patrick Kane for the Calder). But they weren’t the only ones recognized in the voting. Perusing the lists of vote-getters compiled by James Mirtle, there were several Caps in the mix. Some will, no doubt, make you go, “huh?”

Posted by The Peerless at 11:34 AM No comments:

Email ThisBlogThis!Share to TwitterShare to FacebookShare to Pinterest
Labels: 2008 awards

It would hardly be the off-season without some “where the #@$% did THAT come from” speculation from everyone’s old pal, Larry Brooks. In a tirade that reads more like a 13-year old’s whining about officiating (our apologies to 13-year olds out there reading this), Brooks tosses off a couple of lines at the end of his column that concerns one of the Caps’ RFAs-to-be – Mike Green…

“Ryan Suter, the Nashville defenseman who would have been a Group II target for an offer sheet, has agreed to terms for $3.5M per, Slap Shots has learned. That leaves Nashville's Shea Weber, Washington's Mike Green and Florida's Jay Bouwmeester as the most attractive Group II defense alternatives. We're told that Green, a dynamic difference maker, is, is being low-balled by the Caps (sic).”

Assuming the position, as it were, of the “insider,” Ol’ Lar’ “is told” about this…by someone. The Caps being famously low-key and close to the vest on any unsettled personnel issues (see: “Jagr, Jaromir” or “Ovechkin, Alex”), we’re wondering who might have “told” Brooks of this situation. We have some theories…

Eklund. The often wrong (ok, always wrong), but never in doubt one has already reported “according to multiple sources” (maybe Brooks is one of them…maybe they are each other’s source) that Suter has agreed to terms with Nashville…maybe he’s got the goods (or can make up stuff) on Greenie, too. 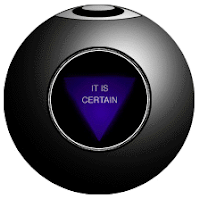 Magic 8-ball. It’s as good as any source. It knows how to keep a secret, it is low maintenance (just give it shake now and then, and don’t drop it).

Carnac. It’s been a while since we’ve heard anything from him (owing largely to his being deceased), but it can’t be discounted. 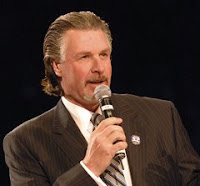 It is entirely possible – like it is possible I’ll replace Cristobal Huet in goal for the Caps – that he is right. Just remember, this is the guy who once bleated that the Penguins had one offer for Jaromir Jagr on the table – from the Rangers. And, they’d better take it and like it. That same day, Jagr was a Cap. More recently (last November), he wrote this…

“Maybe someone can provide one good reason for Alex Ovechkin to sign a new contract with the before becoming a restricted free agent on July 1, because we sure can't think of any.”

He might not be right often (or, well…ever), but he sure is entertaining.

thanks to reisterstowneric on The Official for the lead.
Posted by The Peerless at 9:25 AM 3 comments: