For leaving me with this disturbing mental image... 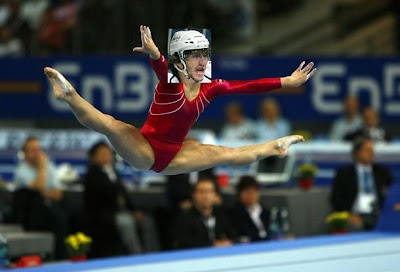 And now...predictions (no, not ours)

It's August, which is to hockey what the Sahara is to moisture. It's a pretty dry month. That being the case, some folks just can't resist jumping the gun on predictions, even though we have six teams above the opening night cap (leaving them some personnel moves to make) and another half dozen within $2.0 million of it (suggesting that they might be in the market for some salary relief).

But, we do have predictions, and they serve as good as any topic of conversation as the last slow crawl to training camp proceeds. For your argumentative enjoyment... 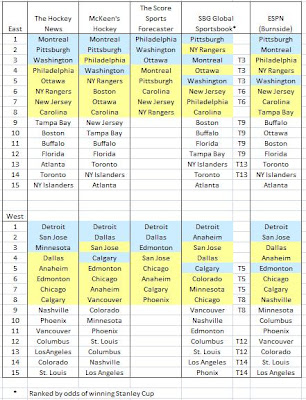 Posted by The Peerless at 1:29 PM No comments:

Email ThisBlogThis!Share to TwitterShare to FacebookShare to Pinterest
Labels: predictions

Back in the 1990’s, when the Dallas Cowboys were winning three Super Bowls in four years in the NFL, the Cowboys’ had their “big three” – quarterback, running back, and wide receiver. By the time the Cowboys had won that third Super Bowl in four years, neither Troy Aikman, Emmitt Smith, nor Michael Irvin had reached their 30th birthday. It was a reflection of the importance of having a core group of players (in this case, all on offense), a young group at that, and of keeping them together for a period of time. These players shared ten seasons together, from 1990-1999, and were among the most important cogs of what was arguably the most successful team in the NFL in the 1990’s.

It makes one wonder at what passes for the “big three” among NHL teams. During this agonizingly slow stretch of the hockey calendar, we were doodling with lineups and such, and wondered what the 30 teams might look like in terms of their “big threes.” Before we get too deep into this, this isn’t entirely science. One might split hairs over who plays what position among the forwards, or if one player or another is really “big three” caliber (and to extent they’re not, it might be an indicator of a club that is, or will struggle). However, we took a look at the clubs with only a few criteria in mind. The “big three” is comprised of a center, a winger, and a defenseman (goaltenders weren’t included, because they tend have longer lead times to establish themselves, and a goaltender would make “four”). To be a “big three,” the player had to be under 30 years of age, and the players had to be contributors (raw recruits of considerable promise generally aren’t in this group). See? I told you it wasn’t science. But if you’re looking for a theme to this, it is “built to last,” and part of that is how long the trio, under their current contracts (or extensions, if already signed), will be together. 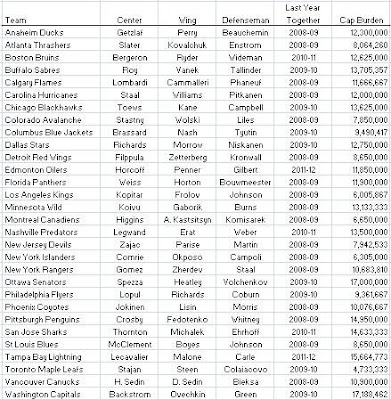 And what do we glean from this? Well, for those of you paying attention, the Capitals’ big three is the most expensive of the lot, but you already suspected as much, didn’t you? That’s a product of two big-time extensions that will kick in this year.* The other leg of that triad – Nicklas Backstrom – represents some work to do down the road insofar as it is his contract that keeps the three together only through the 2009-2010 season.

We find it interesting that 17 teams will have to reassemble or re-sign their groups after this coming season, since at least one member of the big three has an expiring contract. Only two clubs have groups whose contracts permit them to be together (barring trade or other departure) for more than three years. Curiously, those two are Edmonton, which is generally thought to have a pretty good prospect pool behind such players as Shawn Horcoff, Dustin Penner, and Tom Gilbert; and Tampa Bay, which has almost no one coming in behind the likes of Vincent Lecavalier, Ryan Malone, and Matthew Carle (well, there is that Stamkos kid…). Opposite poles, as it were.

We’re looking at a snapshot here, and salaries are a moving target. So, divining a relationship between dollars and playoffs is a bit of work. Let’s look at Washington, for example…Alex Ovechkin, Mike Green, and Nicklas Backstrom will represent a $17.2 million cap hit for the 2008-2009 season. The Caps made the playoffs last year when these three represented a $7.1 million cap hit.

Let’s cut to the happy ending…does it matter? We think it does. Continuity and talent are two important ingredients for success in a league where the salary cap and the possibility of large paydays through free agency make for a lot of player movement. However, looking at the group ranked in terms of cap burden suggests that there is a third element here as well. If you look at the list above, nine of the teams in the top half (in terms of cap burden this year) made the playoffs last year. Seven clubs in the lower half made it. Even accounting for the fact that some of these “big threes” include players not on the roster last year, there are eight teams in the top half of the cap rankings having made no changes to that top three that made the playoffs last year, five in the lower half. Money helps, to a point (and in some case, moving up in the rankings reflect rewards for and retention of core elements – Washington is a case in point), but one has to build a team around these guys, too.

Here’s the thing, though. The Capitals have the youngest of the young here. Ovechkin, Backstrom, and Green – is the youngest of the 30 big threes. Seeing as how Ovechkin and Green will be together (barring trade or other departure) through the 2011-2012 season, and how Backstrom is on record as saying “I don’t want to play anywhere else in the NHL. Washington is my team,” this could be a group that will be together for quite a stretch. It just another way of showing that this is a club that is being “built to last.”

* The careful reader will note that the Caps’ being at the top of this list comes on something of a technicality – Pittsburgh’s Evgeni Malkin is conspicuously missing from the Penguins’ big three, his being a center. If he was to be included, replacing Ruslan Fedotenko, Pittsburgh’s big three costs $21,400,000. They also stay together through the 2012-2013 season. And, Ottawa has the unsettled matter of defenseman Andrei Meszaros, which could push the Senators past the Capitals in replacing Anton Volchenkov as part of their “big three.”

Posted by The Peerless at 9:36 AM No comments:

The first to grab the ice cream cone will win 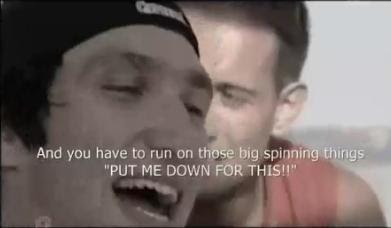 Code for winning a series-clinching game in the Stanley Cup playoffs? Uh, no (but it wouldn't be bad as such things go). It is the latest of an equal parts disturbing and hilarious offering of video clips from Tuvanhillbilly, for whom the Caps are "a new obsession." Although in the latest offering the combatants for the eagerly sought-after ice cream cone are likened to a certain ex-president and a current professional sports commissioner, we think they have a creepy resemblance to the big-head presidents at Nationals games.

If taking a turn down one of the odder alleys of Caps Nation is your thing, well...Tuvanhillbilly is your tour guide. It's becoming a "must see" destination.
Posted by The Peerless at 8:41 AM No comments: