We are here with the second in a series of ten memorable goals in the history of the Washigton Capitals.  Number 10 was odd, but Number 9 was a record-setter against an opponent you love to see on the other end of the score. 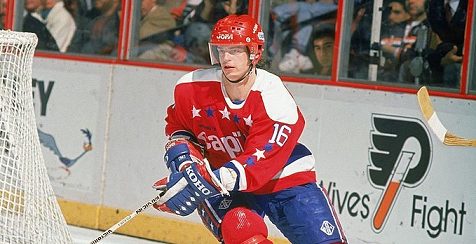 The 1983-1984 Washington Capitals were having trouble shaking off the distractions of the mid-winter holidays.  Starting on the day after Christmas 1983, when they dropped a 5-4 decision to the Philadelphia Flyers, the Caps went 2-3-1 in their next six games, leaving them a game under .500 (19-20-3) when they traveled to Philadelphia on January 8th for a rematch against the Flyers at The Spectrum.

There was no love lost between these two teams, and the bitterness was perhaps more keenly felt by the Caps, who dropped their previous two decisions to the Flyers, allowing 14 goals in the process, including a 9-4 pasting at The Spectrum on December 15th.

It did not look a lot better for the Caps when the Flyers opened the scoring 5:20 into the game on an unassisted goal by Dave Poulin.  The goal might have been the last straw of frustration that the Caps experienced for the better part of a month.  Just 59 seconds after the Poulin goal, Bengt Gustafsson scored for the Caps on his first shot of the game.  Less than five minutes later, Gustafsson put his second shot of the game on goal, and it found the back of the net behind goalie Pelle Lindbergh to give the Caps a 2-1 lead.

When Dave Christian scored less than three minutes after the second Gustafsson goal, the Caps had a 3-1 lead at the first intermission and had pelted Lindbergh with 16 shots on goal.  The Flyers restored some of the tilt in the ice to start the second period, but mid-way through the frame Doug Crossman went off on a holding penalty, and Gustafsson made it three-for-three, shots and goals, on the ensuing Washington power play.

That would be all the scoring in the second period, but the Capitals were hardly through.  Wes Jarvis rubbed some salt in the Flyer would with an unassisted shorthanded goal in the fourth minute of the third period to make it 5-1.  Less than two minutes later, Gustafsson recorded his fourth goal of the game on his fourth shot, tying the club record for goals in a single game originally set by Stan Gilbertson against Pittsburgh on April 6, 1975 in an 8-4 win.

The only question left was, did Gustafsson have another goal left in him.  He had his chance when Poulin was sent to the box for an elbowing penalty 9:37 into the period.  Less than a minute later, Caps fans had their answer.  Taking a pass from Mike Gartner, Gustaffson tried to move the puck to defenseman Rod Langway, but the puck hit a Flyer defender and rebounded back to Gustafsson.  The second time on his stick was the charm as he collected the puck in the right wing faceoff circle and fired it past Lindbergh a fifth and final time, on his fifth shot of the game.  The Caps rolled to a 7-1 victory.

The goal set a club record that would stand for more than ten years, until Peter Bondra tied it in February 1994 in a 6-3 win over Tampa Bay in what was a different kind of stunning efficiency – Bondra accomplished the feat in 24:46 of game clock time.  The five-goal effort by Gustafsson against the Flyers was accompanied by a three-assist night for Gartner and a two-assist night for Langway.

Perhaps even more important, the win set off a three-game winning streak for the Caps – all on the road – that was the start of a stretch run in which they went 29-7-2, going from fourth in the Patrick Division to second in the Division by seasons’ end.  They would set a club record for wins (48) and finish with more than 100 standings points for the first time in club history (101).  Gustafsson finished the season with what would be career-highs in goals (32) and points (75, tied two seasons later).

That the fifth goal would come on the fifth shot against, at the time, arguably the Caps’ most hated rival, and sparking the club to one of the best finishes in its history makes that goal one to chalk up in the “memorable” category.

B. Miller/Getty Images
Posted by The Peerless at 8:00 PM No comments: