I love it when a good prognostication comes together.
Let’s get this out of the way right off the bat. The Caps played about eight minutes of superior hockey tonight. The rest was, well…not. But it was good enough for a 4-2 win over Tampa Bay in Olaf Kolzig’s return to Verizon Center.
Perhaps it was the circumstances – the subplots to this game and all (Kolzig’s return, Alex Ovechkin’s goal drought, Barry Melrose behind the Lightning bench being a walking fire hazard with his mulletized look…) – and perhaps it was as Coach Bruce Boudreau alluded to after the game that it is very difficult to assemble three great periods of hockey (he suggested Melrose probably read the Lightning the riot act at the first intermission – we agree – which might have inspired the Lightning to actually look as if they cared in the second period). But for whatever reason, the Caps looked as if they could beat anyone in those eight minutes in the first period. They looked a little too ripe for the plucking in the other 52 minutes. Oh, shoot, maybe we’re just being picky.

OK, that’s out of the way. And having said that, it was a night of firsts…

-- Kolzig’s first game back in a visitors’ uniform…Steve Eminger’s too. Matt Pettinger has to wait; he was scratched for this one.

-- Eric Fehr’s first goal of the year and first hard hat for his effort.

You could say that the Caps did it with balance, and you’d be right. Eleven different players had points on the four goals, Ovechkin the only one with two, and 14 of the 18 skaters were on the plus side of the ledger (the other four being even).

But the “BOSS” line –Backstrom, Ovechkin, and Semin Score” had a good night in particular – a goal and three assists for the trio, who were also a combined plus-6 (although those five giveaways by Ovechkin get your attention, too).

We do wonder, though, at what seems almost to be the artist’s temperament of Alexander Semin. Capable of spellbinding puckhandling and a lethal shot, he’s also capable of a “whaaaaa….?” moment as when he had what looked to be a clear shot from between the top of the circles, but passed to an open wing vacated by a teammate. Good with the bad…

Eric Fehr deserved the hard hat. Yeah, he had what was credited the game winning goal, but Fehr did a lot of other things, too. A high-scoring player in junior, that part of his game hasn’t really crystallized, yet. But there he is, hustling on the forecheck, chasing down opponents, and doing a lot of the heavy puck-lugging that Viktor Kozlov might otherwise do. He had a good game.

One thing the Caps did very well tonight was to use their sticks in the passing lanes. The Lightning did not often get the chance to make cross-ice passes without a Cap stick getting in the way. Again…the little things.

And, the defense did a very good job for most of the game sweeping away rebounds and loose pucks in front of Johnson. Ok, that’s two things.

It seems rather clear to us that Vincent Lecavalier is not yet quite right. We can’t remember a game against the Caps in which he was less of a factor or more invisible.

Oh, and to those fans imploring a Cap – any Cap – to hit Martin St. Louis?...good luck. You don’t survive to be a generously listed 5’9” winger at the age of 33 in this league without having learned certain survival techniques in the land of the large.
Steven Stamkos might someday be a great player, but for the moment, he looks like a rookie. We’re reminded of the scene in the locker room in the movie, “Bull Durham,” when Crash Davis tells Nuke, “Look, Nuke--these Big League hitters are gonna light you up like a pin ball machine for awhile--don't worry about it. Be cocky and arrogant even when you're getting beat. That's the secret. You gotta play this game with fear and arrogance.” 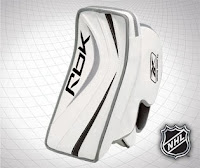 This is a blocker. The Caps looked to be aiming over this early and often (successfully). We wonder why they more or less stopped after the first period.
Steve Eminger had just about as bad a homecoming as did Kolzig…he was on the ice for the Caps three goals in the first period.
Ryan Craig had six shots for Tampa to tie for the team lead. I swear, I don’t remember one of them.
Was that a tone-setter when Ovechkin freight-trained Vaclav Prospal less than 90 seconds in?
Donald Brashear is really showing some flash in his offensive game. The patience he displayed on setting up Tom Poti for the first goal…well, maybe he’ll be teaching Swedish before too long, too.
That’s 5-1-1 in the last five games for the Caps. But they have a hard stretch coming up – at Carolina, home and home with New Jersey, then on the road west for games at Anaheim, Los Angeles, San Jose, and Minnesota. Getting six of six points in this abbreviated home stand is something to build on as they undertake the next chore. Well done, boys.
Posted by The Peerless at 11:21 PM 1 comment:

Creatures of a changing routine 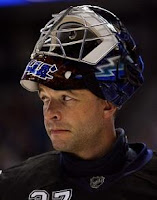 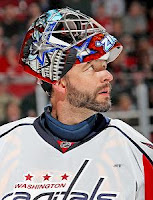 Most folks are creatures of routine. Those of us who don’t pull on a sweater and earn our living on the ice usually wake up, pour a cup of coffee, read the morning paper (or Google the news), drive to the train station or the bus stop or to the office, then settle in for a day on the job.

We can’t imagine athletes are any different. In fact, athletes might be more creatures of routine than thee and me. Stories of superstitions and ritual abound in the athletic sphere, but perhaps there isn’t anything more complicated than how one arranges his locker or puts on his equipment.

Tonight, that goaltender will wear the same number, but for another team.

And, he will turn right.

Things, they do change.