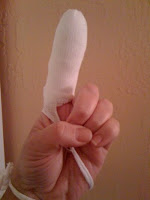 Well, it finally caught up with them.

Often times in a winning streak, you can see the end coming, even when the team continues to win. In the last two games the Caps were bailed out by good goaltending in the third period, as both Semyon Varlamov and Jose Theodore had to withstand 20 shots on goal in that period in wins against Philadelphia and Atlanta.

They didn’t get that good goaltending tonight, and the Caps continued their somewhat iffy play among their skaters in a 4-3 overtime loss to the New York Islanders. They got a standings point, but the Islanders – winners of only their third game of the season and first on the road – made this one feel like worse than the overtime loss it was.

The Caps got the required goal from Alex Ovechkin (14th in 13 games), a pair of goals from Tomas Fleischmann, and a pair of assists from Mike Green, but this was about breakdowns and goaltending. First, it was Kyle Okposo skating into the Caps’ zone and getting defensemen Milan Jurcina and Shaone Morrisonn to back off. With the space being granted, Okposo sent a shot that Jose Theodore probably stops 99 times out of 100. But this shot snuck through. It wouldn’t be the last, not that Theodore didn’t have help.

The help came in the form of a truly ugly turnover by Mike Green who, with Frans Nielsen standing almost right in front of him, tried to send the puck up the middle of the ice. Green whiffed on the pass attempt, and Nielsen was right there to accept the gift and roof the puck over Theodore to give the Islanders a lead.

Then, barely a minute after the Caps had taken a 3-2 lead, it was Nielsen again, taking a pass from Mark Streit and snapping the puck through Theodore’s pads – another shot Theodore would be expected to stop – to tie the game.

With there being no scoring in the third period, the game went to overtime, where the final sequence looked a lot like the latter stages of the Caps winning streak. John Tavares took a pass from Radek Martinek just outside the Caps’ blue line going down the right side. Tavares carried the puck into the corner where he was picked up by Nicklas Backstrom. Backstrom rode Tavares along the end boards, then let him go. Tavares continued skating and without anyone trying to separate him from the puck, he was able to send the biscuit out in front, where Mark Streit was waiting in the slot all alone. Streit buried the puck behind Theodore, and the six-game winning streak was over.

- Tomas Fleischmann had a pair of goals, his first two-goal game since October 25, 2008, against Dallas. But it wasn’t the goals as much as where they came from. One was a wrap-around, the other a wrister from in tight. They were the kind of goals in traffic that Fleischmann might not usually be counted on to get, and it was pleasant to see. What made this particularly odd was that both goals, scored from in tight, were scored with Andy Sutton – five inches taller and 50 pound heavier – standing right next to him. Seems the Caps aren’t the only ones, perhaps, with the occasional crease clearing problem.

- The Ovechkin-Backstrom-Semin trio finished the game with 15 shots on goal (of 40 the Caps had), a goal, and an assist. OK, you expect that. The Brendan Morrison-Mike Knuble-Brooks Laich trio had six shots on goal (Laich had four of them) and no points. Not exactly what one would expect.

- 18 giveaways. An indicator of the somewhat sloppy play that has crept into the Caps’ game of late.

- Special teams weren’t the problem tonight. Taking only three minor penalties and killing them all off, drawing six penalties and scoring twice with the man advantage – that’s the way you draw it up. It was the fourth straight game in which the Caps had five or fewer shorthanded situations, and ninth in the last ten games. In games in which they face five or fewer shorthanded situations, the Caps killed 85.7 percent of them.

- Speaking of special teams, 15 shots from five different players on six power plays in 9:50 of power play time. If anyone was shouting “SHOOOOOT,” they should just shut up.

- Brendan Witt is on a streak. Not only did he get an assist – his first point of the year – he finished on the plus side of the ledger for the second straight game… his only two plus games of the year. That’s OK, he’s still on a pace to finish minus-67.

- Richard Park led all players in taking 21 faceoffs – none of them in the offensive zone.

- All of a sudden, the Islanders have 11 points, which is as many as the Philadelphia Flyers and Boston Bruins have.

All good things come to an end. And if a winning streak is to come to an end, then by gosh, end it as a team. The Caps did. They didn’t get good goaltending tonight, by and large (although Theodore did have a few top notch saves), and the Caps didn’t play particularly inspired hockey in front of him. The trick is not to make it a habit. They’ll get a chance to rectify this on Sunday against Columbus, when they will have a chance to match their longest points-earned streak of last year, an eight-game streak that last from November 4th through November 19th. It would be a nice way to start this November.
Posted by The Peerless at 12:13 AM 2 comments: