Washington Capitals: That Was The Week That Was - Week 18

For the Washington Capitals, Week 18 was “Pennsylvania Week” with games against the Philadelphia Flyers and the Pittsburgh Penguins.  In each, the Caps fell behind by a pair of goals early.  In one, they came back.  In the other, well… 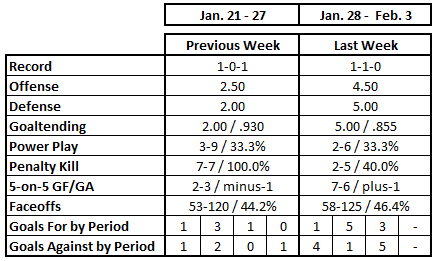 It could have been worse.  Teams allowing the first goal of a game do not generally win such games.  Only the Tampa Bay Lightning have a winning percentage over .500 this season in such games, and they are just one win over .500 (12-8-3).  The Caps are one of the better teams at this, though, going into the week with a 12-13-3 record when allowing the first goal of a game.  Splitting the two games in which they allowed the first goal this week left them with the third-best record in the league when faced with that deficit, topped only by the Boston Bruins and the Lightning, not bad company given that the Bruins are the hottest team in the league (points in 20 straight games), and the Lightning have the best record overall.

The disappointing thing, though, was not closing out the Penguins when they erased their deficit.  After falling behind by 2-0 and 3-1 margins, the Caps tied the game in the second period and carried that tie into the third period.  But they could not keep out of the penalty box and, as a product of that, could not keep the Penguins from pulling away.  Still, splitting the week against Metropolitan Division rivals left the Caps with a three-point lead in the division over the stubborn New Jersey Devils, and they do have a 6-3-1 record against division opponents, which trails the Columbus Blue Jackets (8-5-2) and New York Rangers (6-4-3) in points earned, but the ten intra-divisional games they played is five fewer than the Blue Jackets and three fewer than the Rangers.  There will be opportunities to take matters into their own hands in suppressing any challenges to their top spot in the division. 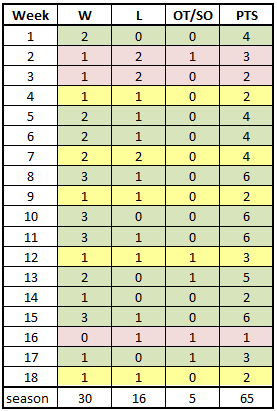 Nine goals in two games is fine production.  In fact, the Caps ended the week having recorded three straight games with four or more goals.  It is part of a longer run that started after the Caps were blanked in consecutive games in late December.  Since then, Washington has averaged 3.38 goals per game and have scored four or more seven times.

Seven different skaters recorded a goal in Week 18, Alex Ovechkin and Chandler Stephenson with a pair each.  Stephenson’s goals came less than a minute apart in the Caps’ 5-3 win over the Flyers to open the week, Ovechkin’s goals coming in the 7-4 loss to Pittsburgh to close the week.  It was good to see T.J. Oshie and Andre Burakovsky break through with goals.  Oshie snapped a 13-game streak without a goal with his tally against the Flyers, a goal that was his first on home ice in more than two months (November 18 against Minnesota).  Burakovsky’s goal broke a nine-game streak without a goal and was his first goal on home ice this season.

The Caps allowed both opponents to get to the 30-shot level in Week 18.  The Flyers had 30, seven more than they managed when the teams met on January 21st (a 2-1 overtime win for the Flyers), and the Penguins had 39 shots on goal, the third-highest number allowed by the Caps this season (the fifth time they allowed that many).  The two games allowing 30 or more shots extended the Caps’ streak to three in that category.

The Caps did a good job of locking down the Flyers in the third period of their contest after they took a 3-2 lead.  They allowed Philadelphia only seven shots on goal, and by the time the Flyers converted one of them, the Caps had a 5-2 lead.  It was the only period for the week that Washington gave up fewer than ten shots in a period.

Oddly enough, the Caps were respectable in their shots-for percentages at 5-on-5, going 49.44 percent overall.  Their difficulty though, was when the decision was in doubt.  They were just 45.45 percent when tied and only 46.61 percent in close situations (all numbers from NHL.com).

One can play chicken-or-the-egg and play the mind game of whether allowing ten goals in two games was a product of poor goaltending or bad defense in front of it, but it certainly was not a good week for the goaltending.  It was certainly uneven with Braden Holtby allowing two goals in the first period of each game and stopping 20 of 24 shots (.833 save percentage) and allowing four goals on 14 third period shots for the week (.714).  His second periods were more Holtby-like with 24 saves on 25 shots (.960).  Holtby has found the Penguins a particular tough nut to crack lately.  In his last nine appearances against Pittsburgh, he is 3-3-2 (one no-decision), 3.53, .893, and he was pulled three times, including in the third period of the Caps’ 7-4 loss on Friday.  Philipp Grubauer got mop-up work in the loss to Pittsburgh, stopping six of seven shots in a game that already got away from the Caps.

Two straight weeks at 33.3 percent, 5-for-15 overall, has to be considered a good thing.  If there was something Caps fans might feel a bit greedy about, it was that the Caps had only six power play chances, three in each game.  And, it would have been nice to get one of those power play goals against Pittsburgh, who shut out the Caps on three chances in the 7-4 loss to the Penguins.

This is where T.J. Oshie and Andre Burakovsky broke out of their respective goal scoring droughts, accounting for both of the Caps’ power play goals for the week.  Five different Caps had power play points. Oddly, perhaps, none of them included either Nicklas Backstrom nor Alex Ovechkin despite Ovechkin leading the team in power play ice time (9:21 of the total of 10:20 the Caps had for the week) and Backstrom getting 7:21, tied with Oshie for third most on the team for the week.

As a group, the Caps were efficient to a point, recording two goals on ten shots in 10:20 of ice time.  But they were 0-for-7 in six fruitless minutes of power play ice time against the Penguins.  Think of it as momentum lost. 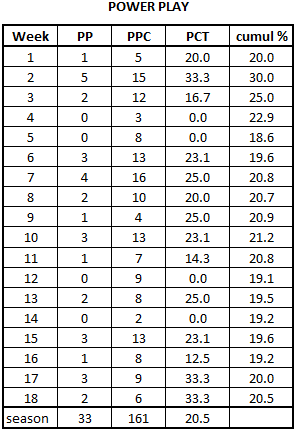 There was the good, the bad, and the ugly on the penalty kill in Week 18.  The good is easy.  The Caps held the Flyers to one power play chance and snuffed it out, allowing two shots on goal in the two minutes.  Then there was the bad.  The Caps allowed the top power play squad in the league four chances, two in the space of less than five minutes in the third period.  The Penguins scored on both of those third period power play chances to pull away from the Caps in the 7-4 loss.  The ugly was allowing three goals on seven shots in four power play chances to the Penguins to finish the week allowing three goals on nine shots.

The performance against Pittsburgh is disturbing in that it was the second time in three games this season in which the Pens scored three power play goals against the Caps (they did it in a 3-2 win over Washington back on October 11th).  If one did not know better, they would think they have figured something out against the Caps’ penalty kill, or they found a weakness in Braden Holtby in defending power play shots. 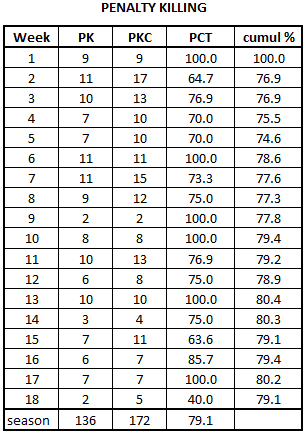 Where it was not quite as bad is that the big-four in taking draws, those Caps with at least ten faceoffs taken for the week (Nicklas Backstrom, Lars Eller, Jay Beagle, and Evgeny Kuznetsov) finished 57-for-117, a not bad but not great 48.7 percent.  It was the others, the guys called in to replace a guy thrown out, that had a hard time, going just 1-for-8 (12.5 percent). 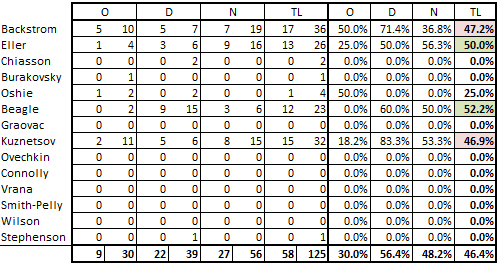 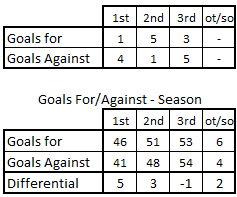 Which leaves the first and third periods, which were awful.  In both games, the Caps allowed the opponent a pair of goals to open the scoring.  Alex Ovechkin got a late first period goal against the Flyers to give the Caps some momentum to go into the second period, something of which they took advantage.  The Caps did allow a third period goal to the Flyers, but that came after the Caps had scored five straight goals to take a 5-2 lead.  It made the game a bit more interesting, but little more.  The three goals allowed to the Penguins, two on power plays, in the space of less than six minutes of the third period?  It was vaguely reminiscent of the five straight goals the Pens scored in the space of barely eight minutes in last January’s 8-7 overtime loss to the Penguins on the same PPG Arena ice sheet.  Not a good memory, not a good week in this category.

Scheduling has been a bit of an issue for the Caps, who played just two games in each of the last three weeks.  That they are 2-2-2 in those games is not the worst outcome, but it is not a pace the team wishes to sustain, either in frequency of games played or record. The best part of the week might have been the signs of offensive life coming from T.J. Oshie and Andre Burakovsky.  Next up on the revival list might be Nicklas Backstrom, who is stuck on 198 career goals (he has one in his last 11 games).

All three will get more frequent opportunities to raise their respective games with the Caps’ schedule getting busier – three games coming in Week 19 and 13 games over the last 25 games of February, starting with Sunday’s matchup with the Vegas Golden Knights.

Posted by The Peerless at 9:30 AM No comments: