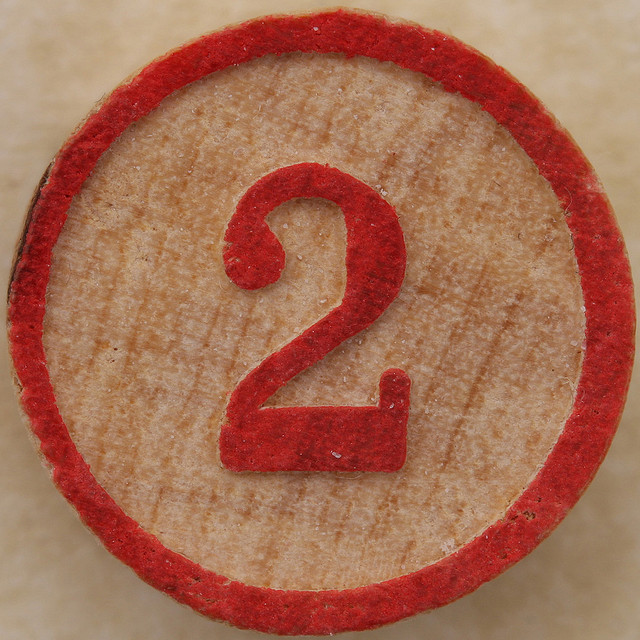 This contest marked the return of Mike Green to the lineup after having missed a week to an ankle sprain suffered against the Pittsburgh Penguins on Halloween night.  Green would get a chance to skate on the power play for the Caps early as Lightning defenseman Victor Hedman was sent off for high sticking just 33 seconds into the contest.  The Caps converted the early opportunity, and it was Green lighting the lamp.  Nicklas Backstrom started the play by winning a draw to goalie Anders Lindback’s left, pulling the puck back to Alex Ovechkin.  The Caps winger wristed a shot toward the Lightning net that hit a body in front and skittered to the right wing corner.  Backstrom was first to the puck and walked the puck up the right wing wall.  When challenged, Backstrom slid the puck over to Green at the top of the offensive zone, and Green’s one timer sailed through a maze of bodies and past Lindback to open the scoring at 1:02.

Fifteen minutes later, Mike Ribeiro netted his fourth of the season and second in as many contests.  It was a case of catching the Lightning in a missed communication between their defensemen.  Dmitry Orlov chipped the puck out of the corner to the left of goalie Michal Neuvirth in the Caps’ end.  Matt Carle tried to keep the puck in, but had it bounce over his stick onto that of Marcus Johansson.  The trouble for the Lightning was that Carle’s partner – Brian Lee – was caught below the top of the left wing circle, giving Ribeiro a chance to dart through the middle and join Johansson on a break.  Johansson carried the puck in on the left side, and as he reached the top of the circles slowed just for an instant to suggest a shot.  Lindback squared up to him, giving Johansson the chance to slip the puck to Ribeiro for the tap-in that gave the Caps a 2-0 lead that they would take to the first intermission.

The second period started much like the first period started.  The Caps were awarded an early power play – Ryan Malone going off at 4:18 for cross-checking – and the Caps converted when Brooks Laich poked home a rebound of a Mike Ribeiro shot at 4:43.

The Lightning got back into it mid-way through the period when Caps goalie Michal Neuvirth lost track of shot from Brett Connolly that pinballed off of legs in front of the crease.  The puck laid at the left post, but Neuvirth was at the other side of the crease.  Before he could lunge and cover the puck, Teddy Purcell poked it over the goal line to bring the Lightning to within two at 3-1.

The Lightning appeared to cut the deficit to one barely a minute after the Purcell goal.  With Troy Brouwer off for holding, Steven Stamkos was set up for a one-timer on a pass from Martin St. Louis.  Stamkos’ shot handcuffed Neuvirth and popped over the goaltender’s left shoulder.  The puck appeared to land on edge on the goal line, and Neuvirth dove to cover it.  The referee signaled a goal, but the play went to video review.  The verdict from the war room in Toronto was that the entire puck did not completely cross the goal line, and the goal was disallowed.

The disallowed goal would loom large later in the period when Lightning defenseman Matt Carle was sent off for tripping at 15:37.  Less than a minute into the power play, Nicklas Backstrom swatted a rebound of a Mike Green shot past Lindback, and the Caps had a 4-1 lead heading into the second intermission.

The Caps played cautious hockey in the third period, keeping the Lightning from generating any momentum through the neutral zone and avoiding any odd-man rushes against.  It made for a relatively easy period for Neuvirth in goal, despite the fact that he faced 12 shots in the period.  The last of those shots, however, found the back of the net when B.J. Crombeen deflected a shot by defenseman Victor Hedman through Neuvirth’s pads at 17:55.  The Lightning pulled Lindback for an extra attacker with 90 seconds left, but they could not manage a shot on goal with the 6-on-5 advantage.  It was enough for the Caps to wrap up a 4-2 decision and maintain their lead over the Carolina Hurricanes in the Southeast.

Notes… The two-goal decision broke a six-game streak for the Caps in which each game was decided by one goal… Mike Green celebrated his return with a three-point night (1-2-3); it was the most points he recorded in a game since going 2-2-4 in a 7-1 win over Detroit on October 22, 2011… 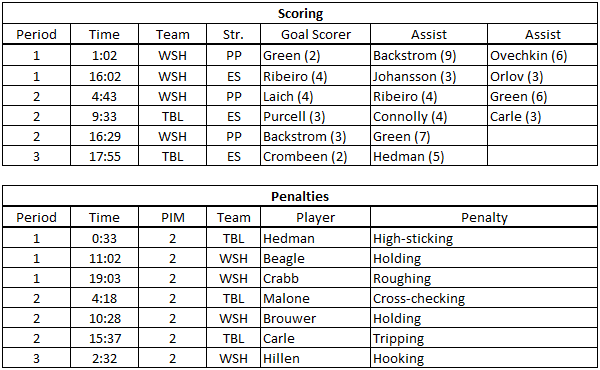