The Peerless Prognosticator is ON THE AIR!!! -- Game 3: Avalanche at Capitals. October 19

The Washington Capitals get an early opportunity to measure themselves against what is arguably the elite team in the Western Conference when the Colorado Avalanche visit Capital One Arena o Tuesday night.  They were the consensus pick of a panel of NHL.com analysts to win the Central Division,. And most picked them to represent the West in the Stanley Cup final.  The Avs split their first two games of the season, both at home, besting the Chicago Blackhawks in the opener, 4-2, and losing to the St. Louis Blues, 5-2, on Saturday.

What the Avs have been in their recent history is a good – sometimes very good – regular season team that disappoints in the postseason, when they get there.  Over the last 11 seasons, Colorado has won more than 40 games four times (in eight full 82-game seasons).  But over those same 11 seasons they reached the playoffs five times (the last four years in succession) reaching the second round three times but never reaching the third round. Colorado is an enormously talented team that should easily top the 100-point mark and perhaps post 50 or more wins, but it’s not about the regular season for this club.

The Caps are fresh off a three-point week, beating the New York Rangers in the season opener, 5-1, and dropping a 2-1 overtime decision to Tampa Bay on Saturday. 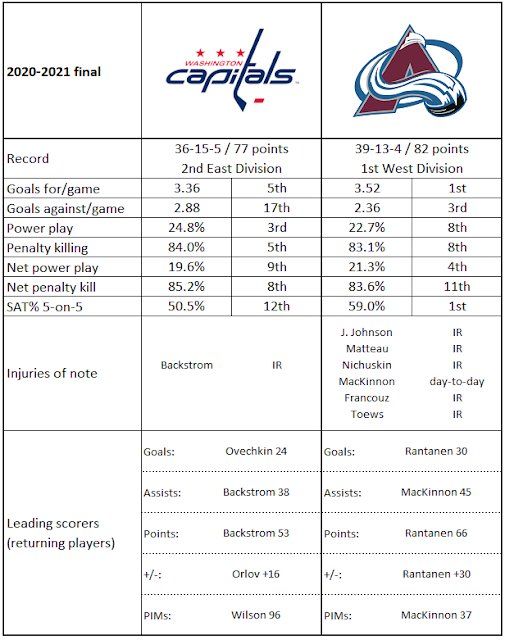 1.  Colorado is missing several players. Nathan MacKinnon will not accompany the team on its three-game road trip that begins in Washington, a victim of COVID protocol.   Jack Johnson is also out on COVID protocol, while the injured list (all on IR) includes Stefan Matteau, Valeri Nichushkin, Pavel Francouz, and Devon Toews.

2.  Colorado is 0-for-7 on power plays through two games, one of seven teams yet to score a power play goal.  The team finished eighth on the power play last season (22.7 percent).

3.  The Avalanche are not an especially physical team, or they dominate puck possession (they finished first in shot attempts-on ice at 5-on 5 last season). Their 18.0 hits per 60 minutes is tied for eighth-lowest in the league.

1.  It is only two games, but the Caps are tied for third in the league in scoring defense (1.50 goals allowed per game).

2.  The Caps are one of eight teams with a net power play of 100.0 percent, having allowed one power play goal and scoring a shorthanded goal of their own.

4.  Three skaters have sh0orthanded goals so far in league play, all whose first names start with the letter “A.”  Andrew Cogliano, Andrew Copp, and the Caps’ Alex Ovechkin.

5.  The Caps are the only team in the league that has yet to allow a goal in either the first or second periods of games.

Goaltender Darcy Kuemper has been around.  The Colorado Avalanche, who obtained Kuemper in July via trade (the price was a first-round draft pick in 2022, a conditional third-round draft pick in 2024, and defenseman Conor Timmins), are Kuemper’s fourth NHL team.  He spent his first five seasons with the Minnesota Wild (a sixth-round pick by the Wild in the 2000 Entry Draft), a brief stay (19 games) with Los Angeles, and three-and-a-half seasons with Arizona before settling in with the Avalanche.  With the three teams he played for before Colorado, Kuemper never had a goals against average over 2.60 and never had a save percentage under .910.  He gets little notice among the goaltenders in the NHL, but he has been a solid performer in his nine NHL seasons preceding this one.  He has, however, gotten off to a slow start in Colorado, going 1-1-0, 3.09, .902 in his two appearances so far.  Kuemper is 1-1-0, 2.03, .939 in two career appearances against the Capitals.

Oh, if it had only counted.  Nick Jensen does not have a goal on his ledger so far this season, but his one-timer off a rush that was subsequently overturned for being offside was a thing of beauty, an Ovechkinesque drive from Ovechkin’s office that beat New York Ranger goalie Alexandar Georgiev cleanly over his glove on the far side.


But Jensen’s stock in trade is defense – anticipating opponents’ moves, moving the puck out of harm’s way, keeping opponents from doing what they want to do, where they want to do it.  Jensen does not have a point yet this season and has only three shots on goal, but he has averaged 20:30 in ice time over two games (third among Caps defensemen), has four hits (most among defensemen), has been on ice for only one even strength goal against, and has an unblocked shots at even strength differential of plus-2 (second best among defensemen).  Jensen made great strides with the Caps last year when partnered with Zdeno Chara. Whether the lessons have been etched permanently in Jensen’s game remains to be seen, but he is off to a good start, even without the highlight reel non-goal.  Jensen is 0-1-1, minus-3, in seven career appearances against Colorado.

On paper, Colorado is better.  But then again, the Caps are 10-2-0 against Colorado over their last dozen meetings, outscoring them by a 44-32 margin and posting a 29.3 percent power play.  They even won 52.3 percent of the faceoffs between the teams, a bit odd given the Caps’ challenges in this area.  The Avalanche will be playing their first game of their first road trip of the season, a trip that will continue against the Florida Panthers on Thursday and the Tampa Bay Lightning on Saturday.  It is a challenging trip for Colorado, and the Caps are certainly in a position to get the Avalanche off to a poor start on their journey.

Posted by The Peerless at 5:15 PM No comments: