“The voyage of discovery is not in seeking new landscapes but in having new eyes.”
-- Marcel Proust

There is perhaps no position in major team sports that is as different from the other positions on a team as that of ice hockey goaltender from the skating positions.  The goaltender looks different, plays in a closely circumscribed area of the ice, takes almost no part in offense, does not play in shifts.  It contributes to the notion that goaltenders, if they are not a bit odd, then they are in need of special attention… or perhaps informed attention.

In 2013-2014, Washington Capitals goaltender Braden Holtby got special attention. It did not have the intended effect.  The power that was, despite not having played a minute at the position in the NHL, imposed a style on goaltenders that conflicted with Holtby’s style and temperament.  Holtby was conflicted:

“Nothing against what the philosophy was with the changes.  I think it just had to do with my personality, my natural instincts that didn’t quite coincide with the changes, and that led to a lot of second-guessing myself and a lot of overthinking things. The moment you start doing that you start to struggle, and once you struggle, obviously your confidence goes down a bit.”

The effects of the changes showed.  Despite appearing in 12 more games than he did in 2012-2013, Holtby finished with the same number of wins (23).  His goals against rose (from 2.58 to 2.85), and his save percentage sank (from .920 to .915).  He did not go more than three consecutive full games allowing two or fewer goals.  He allowed five goals in seven of his 48 appearances. If he was not a wreck, he was not giving a comfortable vibe that he was going to be the goalie of the future for the club.

Then, the Caps made wholesale changes behind the bench, relieving the entire coaching staff of their responsibilities and installing Barry Trotz as head coach under new general manager Brian MacLellan.  Perhaps the most important subsequent hire for the coaching staff was bringing on former Nashville Predator and Buffalo Sabres goaltending coach Mitch Korn, a coach with a reputation for some odd methods but, more important, one of getting results. Korn was the overseer of some very accomplished goalies – Dominik Hasek, Pekka Rinne, and Tomas Vokoun among them.  In Washington, his task would be to scrape the crud off Holtby’s game and make use of the skills and temperament he brought to the rink.

You could say it worked.  Whether it was Korn’s guidance or Holtby’s maturity (probably considerable helpings of both), Holtby took his place among the best in the game.  His rankings across the statistical spectrum were impressive: 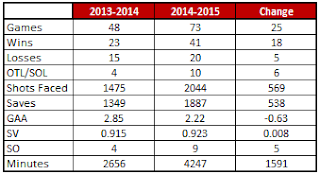 Cheerless’ Take:  There were 34 goalies appearing in at least 10 overtime games.  Of that group, Holtby finished 32nd in save percentage in the extra five minutes (.816).  Only four goalies faced more shots than the 38 Holtby faced in the extra frame, and he tied Kari Lehtonen for the most overtime goals allowed (7).

Game to Remember: April 5th versus Detroit.  The Capitals were on the brink of clinching a playoff spot when they headed to Detroit for Game 80 of the season.  The Red Wings were still in need of clinching a spot.  It made for a playoff-like sort of game, right down the close, low-scoring aspect of it.  Evgeny Kuznetsov gave the Caps a lead in the fourth minute of the game on a power play, and Holtby made it stand up with ten saves in the period.  The Caps added to the lead on a Mike Green goal in the second, but Darren Helm solved Holtby on a power play 13 minutes into the period.  Then, disaster bordering on catastrophe struck.  Green took a penalty late in the period to put the Caps a man down, then Troy Brouwer took one 30 seconds later to give the Wings a 5-on-3 advantage.  Less than 15 seconds after Brouwer went to the box, Holtby made an awkward save on a Marek Zidlicky shot that left him in distress and attended to by trainer Greg Smith.  Holtby remained in the contest and denied the Wings the tying goal on the power play, then shut out the Red Wings over the rest of the contest.  He turned away 35 of 36 shots overall, leading the Caps to within a point of clinching a playoff spot (they would clinch later that evening when Toronto beat Ottawa).  It was 100th NHL win and made him fastest to 100 wins in team history.

Game to Forget: October 14th versus San Jose.  Sometimes a goalie is going to get lit up.  If they play long enough, it’s part of the bargain.  Sometimes, though, when a goalie gets shelled you look at who did the shelling, and you mutter, “what the #@$%?”  That was the third game of the season for the Caps. The Sharks scored on their second shot of the game, courtesy of Matt Irwin, who had eight goals in 100 career games to that point.  Then San Jose scored on their fourth shot.  Irwin again.  He had two goals in 62 games the previous season and had two on two shots in a space of 3:13.  You couldn’t think it could get worse.  It did.  Historians will note that John Scott, he of two goals and 430 penalty minutes in 236 NHL games with four different teams (the Sharks being his fifth) coming into this game, ripped a shot past Holtby’s left elbow off a turnover.  He was pretty happy… 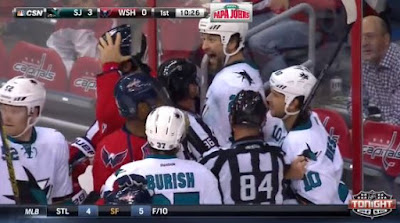 Holtby was not.  He was relieved by Justin Peters, who played well enough to get the Caps to a shootout, where San Jose won, winning the game, 6-5.

It was arguably Braden Holtby’s best postseason performance in his brief career to date. In 10 of the 13 games in which he played (he missed one to illness) he allowed two or fewer goals and had a record of 6-4 in those games.  But here is the thing.  He was 0-4 in games in which he allowed two goals, 6-0 when he allowed one or none.  That’s like the pitcher with an ERA of 1.80 who has a .500 record.  No run, or in this case, goal support.  Think about that.  Holtby won every game in which he allowed one or no goals; he did not win a single contest when he allowed more than one goal.  Even when it’s the Caps that have a hot goalie, they can’t win.

For Braden Holtby, this season might best be described as the best season for a goaltender in recent memory who was not a Vezina Trophy finalist.  He was that good.  He had to be, since the Caps did not get as sturdy a performance from backup goaltenders as they might have liked (OK…backup).  He set a franchise record with 27 consecutive appearances, during which he made 21 consecutive starts, one off the club record.  He would take that record for himself later when he started the Caps’ last 25 games in succession.

However, playing more than 4,200 regular season minutes this season made him one of 13 goalies since the 2004-2005 lockout to record that many minutes.  Only three – Martin Brodeur, Miikka Kiprusoff, and Roberto Luongo – did it in consecutive seasons (Brodeur and Luongo did it three straight years, Kiprusoff did it an amazing five straight seasons).  It might not be a plan, though, even if Holtby maintains that he thrives on the work.

If a Hart Trophy winner is, as the citation reads, “the player judged most valuable to his team,” Holtby’s credentials make a strong argument that he was that for the Capitals.  Without the season he had, the Caps would not get within a time zone of the playoffs unless there was magic done by the front office to find a reliable goaltender (unless you think Philipp Grubauer was ready to handle a 60-game load in the regular season).

The season might have seemed especially sweet for the difficulties he had to endure in the 2013-2014 season.  Holtby discovered new parts of his game with the help of the new eyes that goalie coach Mitch Korn brought to the team, but the talent, it appears, was there all along.