Over their next 34 games, the Washington Capitals will play four home-and-home series, all of them against Metropolitan Division rivals.  Two of those series will be back-to-back sets of games.  The first home-and-home/back-to-back set takes place this Thursday and Friday when the Caps host Carolina at Capital One Arena, and then head south to Raleigh to meet the Hurricanes at PNC Arena.

The double dip for the Caps will be the last games that the team plays before their bye week.  The hiatus might be coming at a bad time for the club, which is looking to add an 11th consecutive win at home and their sixth and seventh consecutive wins over all in the two-game set.

On the other side, the Hurricanes’ momentum forged out of a stretch when they won seven of eight games has slammed to a halt, Carolina having lost four of their last five contests (1-3-1, the extra time loss coming against the Caps on January 2nd)).  It is in the goals allowed where the ‘Canes have had problems.  In their lone win in this five-game run, Cam Ward pitched a shutout for Carolina in Pittsburgh, stopping all 21 Penguin shots he faced.  However, in the four losses, the Hurricanes allowed a total of 20 goals.

The goals allowed shines a light on the goaltending for Carolina.  There is not much to add to what we said about Cam Ward last week before the Hurricanes visited Washington.   But given the back-to-back nature of these games, it is entirely possible that the Caps will get their first look at Scott Darling this season in one of the games.  To say Darling has been a disappointment might be an understatement.  The netminder was traded by the Chicago Blackhawks to Carolina for a third round draft pick last April.  He then signed a four-year/$16.6 million deal with the Hurricanes days later.  It is a deal with (according to capfriendly.com) a modified no-trade clause that allows Darling to submit a 15-team trade list to the team.  This is not a deal for a backup goaltender.

Ten different players share the 15 goals that Carolina has on this five-game slump.  Four of them have contributed more than one goal.  We covered Sebastian Aho (three goals) and Teuvo Teravainen (two) in last week’s prognosto.  The other multi-goal contribotors over the last five games are centers Elias Lindholm and Victor Rask.

Lindholm, a former fifth-overall pick (2013 entry draft), is on a pace to set a career high in goal scored over a season, surpassing the 17 he posted in 2014-2015, his second year in the league.  He is doing it with improvement in his shooting efficiency, which currently stands at a career high of 14.8 percent.  One odd fact about Lindholm is that his goal scoring does not seem to matter much as a driver of wins.  He has single goals in 12 games this season, over which the Hurricanes have a record of 6-4-2. They are 13-11-6 in the 30 games in which he did not light the lamp.  Helping others seems to matter more.  Carolina is 8-1-2 in the 11 games in which he recorded an assist.  And more Lindholm is not necessarily a good thing, either.  Carolina is 4-7-3 in the 14 games in which he skated more than 19 minutes.  He is 3-4-7, minus-2, in 16 career games against the Caps.

Victor Rask is having a strange year.  With 10 goals in 40 games, he is on a pace to challenge his career high in goals for a season (21, set in 2015-2016).  But he has almost no chance to get close to his career high in points (48 in that same 2015-2016 season).  Why?  He has only three assists in 40 games (two of them on power plays), none in his last 20 contests.  It is an odd development, given that in his first three seasons his assist totals climbed from 22 to 27 to 29 last season.  And for odd facts, according to the Carolina media guide, his biggest game day habit is a nap (shouldn’t it be for all of us), and the celebrity he would most like to meet is Justin Bieber.  Okay, then.  Rask is 3-4-7, even, in 13 career games against Washington. 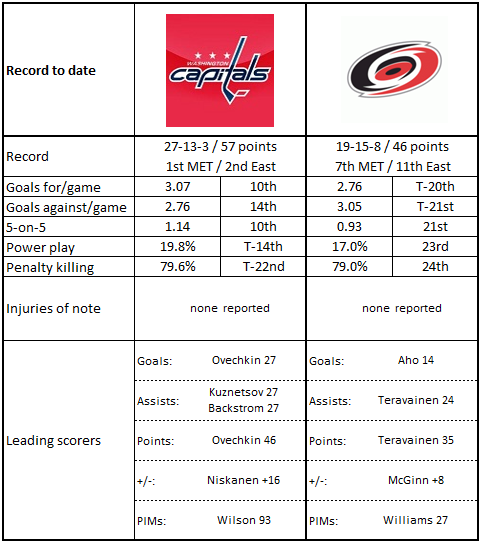 1.  Carolina’s attitude on the road might be summed in three words: “what the heck?”  As in, what the heck, let’s just shoot.  No team in the league has more shots on goal in road games than the Hurricanes (788 in 24 road contests/32.8 per game).

4.  Carolina has out-shot opponents overall 31 times in 42 games this season, yet their record in such games is just 16-9-6, those 15 total losses trailing only Buffalo (16) for most in the league in such games.  And no team has fewer wins when being out-shot than Carolina (3, tied with the Sabres).

5.  The Hurricanes’ winning percentage in one-goal decisions (.348/8-7-8) is fourth-worst in the league, trailing Detroit, Philadelphia, and Buffalo, three other teams on the outside looking in on playoff eligibility.

1.  Washington has played in eight back-to-back sets of games so far this season.  They won the first and lost the second in their first four instances before sweeping a BtB against Tampa Bay and at Toronto on late November.  In their last three instances they lost the first game (twice in extra time) while winning the second twice and losing in regulation once.  They have not been swept in regulation in a back-to-back yet this season.

3.  Only Boston has taken more major penalties on home ice this season (10 times) than the Caps (eight, tied with Florida).

4.  The Caps have 60 even strength goals on home ice this season, fourth-best in the league, trailing the New York Rangers (61), Dallas Stars (62), and Vegas Golden Knights (62).

It only seems as if Jordan Staal has been in the NHL forever.  One of four Staal brothers to play in the NHL (Eric, Marc, and Jared being the others, although if you blinked you would have missed those two games Jared played for Carolina in 2012-2013), Jordan will not turn 30 years old until next September.  He is the youngest active player in the league to have at least 800 games on his resume (he has 806).  Always thought of in terms of his defensive play (he has received votes for the Selke Trophy at the league’s top defensive forward in nine of his previous 11 seasons, finishing as high as third in 2009-2010 with Pittsburgh), he also has averaged just over 20 goals per 82 games over his career.  He comes into this game fifth on the team in scoring (25 points) and tied with Teuvo Teravainen for fourth in goals (11).  Staal has points in his last three contests and is 4-4-8, plus-1, in his last dozen contests.  In 42 career games against the Caps, Staal is 10-7-17, minus-5.

Holtby also comes into this series among the hottest goalies in the league.  Since he allowed six goals in a 6-3 loss to the Nashville Predators on November 14th, he is 14-4-0 (the 14 wins leading the league in that span), although his other numbers are not quite up to those we might have expected from him in recent years – a 2.68 goals against average (19th among 42 goalies with at least 500 minutes over that span) and a save percentage of .916 (also 19th).  What is more, his even strength save percentage of .920 is 18th in that group of goalies.  What he has been consistent in a “you know what you get” in his performance.  Fifteen times in those 18 games he allowed 2 or 3 goals.  One of the instances in which he did not was against Carolina in the 5-4 Caps overtime win on January 2nd.  Holtby is 12-4-0, 1.85, .943, with two shutouts in 16 career games against the Hurricanes.

This is less a “statement” series as it is a “put a team in its place” series, from the Caps’ perspective.  Washington is 11 points clear of the Hurricanes in the Metropolitan Division, and they can deal Carolina what could be, if not a mortal blow to their playoff hopes if they sweep the two games, then certainly a crippling one.  True, Carolina is only one point behind Pittsburgh for the last playoff spot in the East and hold two games in hand on the Penguins through Tuesday’s games.  However, they have only 16 regulation and overtime wins, tied for 11th in the conference (with Florida and Montreal through Tuesday’s games), meaning tie-breakers will be a challenge if it comes to that.

If the Caps have added incentive, it would be to go into the bye week with a good feeling about themselves and what they accomplished over their first 45 games.  They could hit that mark with a 29-13-3 record that would be just one win off last year’s 30-9-6 record at the 45-game point.  All-in-all, not a bad place to be.