Perils of a Midnight Snack

Dale Hunter? Norman Dale? Coach arrives in hockey backwater years after famous suspension for “dirty” hit on opponent in playoff game that resulted in longest suspension on record in NHL. He knows the game, having played it for 19 seasons in the NHL and coaching it for more than a decade in Canadian juniors, but will the fine folk of Hickory… uh, D.C., who like their hockey fast and with lots of shooting from everywhere, give him a chance?

Alex Ovechkin? Jimmy Chitwood? Gifted player, but one who has become an enigma, once thought of as being among the best in the sport, but largely disappearing from the game as he tries to focus on fundamentals. Will he see the character in the old coach that inspires him to a triumphant return to the top of his sport and winner of its ultimate prize?

Alexander Semin? Rade Butcher? Headstrong, plays to his own tune despite benching and getting his playing time cut. A good kid underneath it all and probably knows coach is right, but he can’t help himself. Takes too many penalties and develops a reputation among referees.

Mike Knuble? Buddy Walker? Strong, hard-working, gets those garbage points. Doesn’t say a lot, but you just know when he does, folks listen.

Nicklas Backstrom? Strap Purl? A player who plays with an “inner voice” speaking to him, plays with a serene calmness while chaos swirls around him. Oh, and God wants him on the ice.

Mike Green? Everett Flatch? Quiet, introspective. Was close to the old coach, has a thing for getting all banged up and having to leave the game.

Brooks Laich? Merle Webb? Probably best known for being a good quote, like “Let's win this game for all the small schools that never had a chance to get here,” or “"If you want money, go to the bank. If you want bread, go to the bakery. If you want goals, go to the net."

Cody Eakin? Ollie McClellan? C’mon, are you kidding me?

Maybe Ovechkin will stand up and announce he’s playing hockey again. Maybe the Caps will get big games out of unsung heroes like Buddy and Merle…uh, Knuble and Laich. Maybe Ollie…uh, Cody will pot that big goal in a playoff clinching game as the season is winding down. Maybe the Caps will beat the taller, stronger, more athletic team from South Bend…uh, Pittsburgh to go to a Stanley Cup final. 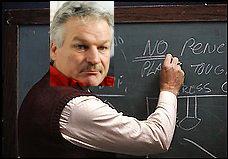 And maybe Coach Dale will lead the Caps to a place they haven’t been before, taking Washington to the 2012 Stanley Cup championship.

God, I gotta find a new midnight snack.
Posted by The Peerless at 7:37 AM No comments: