So...Bruce Boudreau sits Tomas Vokoun in favor of a fitter and sharper (in the pre-season) Michal Neuvirth for opening night.  There are rumbles that Mathieu Perreault will not only get a sweater, but perhaps center one of the top two lines.  Meanwhle, Marcus Johansson, who most had penciled in as the second line center, if not Alex Ovechkin's opening night running mate, could swap out a sweater and a spot in the lineup for a coat and tie, and a seat in the press box

Could this be the dawn of a new era of accountability?  Will we now wake up on game day having to figure out whether the pixie-ish Coach Bruce Boudreau has transformed into the evil "Coach Chucky?"  Fasten your seat belts, kids.  The movie is about to begin!
Posted by The Peerless at 7:42 AM No comments:

The Peerless Prognosticator is ON THE AIR!!! -- Game 1, Opening Night: Hurricanes at Capitals

Everything is fresh and new.

“Ya mean like the white nets behind the goalies, cuz?”
Yeah…good one, Cheerless.


“You know, cousin, there are a lot of traditions associated with the theater and opening night.”
And, of course, you’d know them, Fearless…

“You certainly know about the custom about not wishing anyone ‘good luck’.”
I’ve heard it.


“In the States, they say you should fracture an appendage instead of ‘good luck,” but in Austrialia, instead of ‘good luck,’ they say ‘chookas’.”
“Yer jes’ makin’ stuff up.”
“Not at all. And there is the whole “bad dress rehearsal, good opening night” superstition.”
“Hey, that must be a good sign for the Caps tonight after that last pre-season game, right?”
“Then there is the superstition about one of Shakespeare’s plays.”
You mean “Mac-“


“DON’T say it! It is never said in the theater.”
“We’re at a hockey rink, cuz…”
“Semantics, my dear Cheerless. But did you know that there is a legend that if one does say the name of that play, they must leave the theatre, turn around three times, spit, curse, then knock on the door and ask to be readmitted to the theatre?”
“Geez, Coach Boudreau must say the name of that play a lot then.”
Why is that, Cheerless?

“You didn’t hear all that cursing in that 24/7 show?”
You might have a point. What does a person say instead of the name of that play?

“It is referred to as ‘That Scottish Play.’”
Oh, you mean like, “that team from southwest Pennsylvania” instead of the “Pen-

It is opening night, and the Caps do have to start somewhere to get through an 82-game season. They start on F Street tonight in front of a red-clad throng, ready to rock in full-throated roar for a couple of hours after a too-long off season of NHL hockey. Tonight’s victim?... 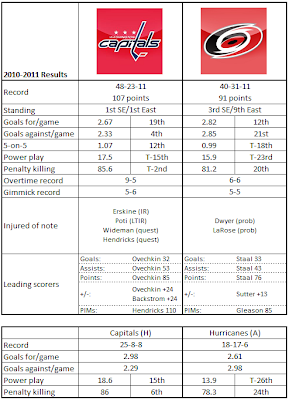 (click pic for larger view)
It probably seems a long time ago to a Carolina fan, that Stanley Cup in 2006. From that team, only three players remain – Eric Staal, Cam Ward, and Chad LaRose. Since then, the Hurricanes have reached the post-season once (2009). They have otherwise been stuck in a revolving door of mediocrity, hanging around the edge of the playoffs, winning 203 games and losing 207 (42 in overtime or shootout) over the last five years. Will this year be any different? Probably not (The Hockey News has them finishing ninth; we have them 10th). But they have been competitive with the Caps over the past five years, going 16-13-5. Until the Caps and Tampa Bay rekindled a rivalry last season, Caps/Canes was perhaps what passed for the most intense rivalry in the Southeast Division for the Caps. As for tonight’s opponent…

Frantisek Kaberle spent the last four years of a nine-year NHL career in Raleigh playing for the Hurricanes, compiling a mark of 9-73-82, plus-8, in 214 games. Now his younger arrives in Raleigh with a three-year, $12.75 million contract in hand. The Hurricanes might be expecting that what they acquired is the 50-point player Tomas Kaberle was over the past six seasons. Last season, he was 0-4-4, plus-1, in three games against Washington.

Since he came out of the lockout and scored 100 points on his way to a Stanley Cup championship, Staal has been stuck, if you can call it that, in the 70’s…points-wise. In five of the six years since, he finished in the 70’s in points, something less than observers might have predicted for him after that big 2005-2006 season. What he has been, though, is clutch. Of the 140 goals he recorded over the last four seasons, 28 of them were game-winners. And he has been a consistent power play producer over those last four seasons, too, averaging 13 goals and 14 assists a season. Last season he finished 33-43-76, minus-10. Here’s your fun Eric Staal number to take to the game – 93. That is the number of goals against he was on ice for last season. Only San Jose’s Patrick Marleau was on for more among forwards (94). Part of that is the fact that Staal led the Hurricane forwards in average penalty killing time on ice, but he was on ice for only 12 power play goals against. That left a lot of even-strength pucks he saw going into his own net at close range.

Cam Ward got the start last night against Tampa Bay in the Hurricanes’ season opener and allowed five goals on 34 shots. In the second half of the back-to-back opening set, newcomer Brian Boucher could get the call. The oft-traveled goalie joins his eighth team in Carolina (including Philadelphia twice). He had a decent year  last season serving as understudy and sometime safety blanket for the Flyers as they nursed along rookie goalie Sergei Bobrovsky. Boucher was 18-10-4, 2.42, .910 in the regular season. But in the playoffs, as part of the interminable Flyer not-so-merry-go-round of goalies, he was 4-4 in nine appearances with a forgettable 3.13 GAA (not quite last among playoff goalies, but he could see it from his crease). Against Washington in his career, Boucher has been pretty successful – 8-5-1, 2.39, .903 with two shutouts. He isn’t a pushover.

A lot of ink (and pixels) has been spent pondering the question of whether Alex Ovechkin will rebound from his 2010-2011 season. However, the Caps’ fortunes might depend almost as much on whether Nicklas Backstrom can rebound from a season in which his goals dropped by 15 and his points by 36. He has not scored a goal in a game that counts since March 22nd, a 17-game streak, including the post-season (the Caps going 9-8 in those games). He also had a 21-game streak without a goal from December 2nd through January 18th last season (the Caps going 7-14-0 in those games). He had four goals in five games against Carolina last season. This might be a good opponent to get off on the right foot against.

1. Focus, Focus, Focus. Lights, effects, player intros, fans screaming like a playoff game with all their pent-up desire to see live hockey. Players might want to put on a show. And the Caps have had, well, “issues” with being too fancy, too often, with entirely too predictable results. So here’s a word…”FOCUS!”

2. Keep the lights on. Although Carolina had a so-so season in the end, the one thing they could do was close out games. They had the second best record in the league when leading after two periods (27-1-0). Trailing after two, especially with the Hurricanes, could make for “lights out.”

3. Get It To The Net On Time. Carolina was not an especially adept team blocking shots last season, especially on the road (23rd in the league). The Caps have added some punch from the blue line in Dennis Wideman and Roman Hamrlik, and Mike Green is still back there. Getting shots through will make the night a longer one for the visitors and will help the Caps avoid those situations when blocked shots might turn into rushes the other way.

In the end, the Caps take the first step in a long process to establish themselves as a team to beat in the East and, perhaps more important, to start instilling those good habits – doing the little things the right way – that champions have. If the Caps play it fancy, Carolina can rise up and bite them in the backside. Play it plain and take care of business, it will be a great opening night.


Caps 4 – Hurricanes 2
Public Service Announcement – The Caps’ better halves are participating in a league-wide fundraising effort to help the families of the Lokomotiv Yaroslavl hockey team that was lost in an airplane crash last month. Click here for more.
Posted by The Peerless at 7:15 AM No comments: