Philadelphia has 11 games left. They have a five-point lead on the Caps for eighth place in the Eastern Conference.

The Flyers have had 11 game stretches that have not gone well...

The Flyers beat Carolina (3-1) in the first game of this 11-game stretch and pounded Pittsburgh (8-2). Their losses were to some pretty good teams -- the only losses to non-top-eight teams were to Phoenix and to Buffalo (twice, once in a shootout).

This stretch started with a 4-3 loss to the Capitals and launched the Flyers on a ten-game winless streak. They ended the slide in the 11th game of this run, a 4-3 shootout win over Buffalo. Again, they lost to some pretty good teams here. The losses to non-top-eight teams were to Washington, the Islanders, Tampa Bay, and Florida (in overtime).

While their most recent 11 games suggests a reversal of fortune from those two bad stretches, they are only 2-2-1 in their last five, all against non-top-eight teams. They've lost to Bufflo and Toronto (twice, once in overtime).

Their last 11 is quite a challenge (as if the Caps' isn't), their records against those teams this season in parentheses:

The Flyers are 4-2-2 since losing Mike Richards to injury, but in those eight games, they've played only two top-eight teams -- the reeling Senators and the Rangers.

And, speaking of injury, Richards remains out with a hamstring injury, Joffrey Lupul just returned on March 12th after sustaining a high-ankle sprain, and Daniel Briere has been dealing with shoulder problems. Simon Gagne is out for the year with a concussion.

Of course, none of this matters if the Capitals don't win, and in the end that is the only thing the Caps hold in their hands -- the ability to put pressure on a team like the Flyers by just winning.
Posted by The Peerless at 6:14 PM 3 comments: 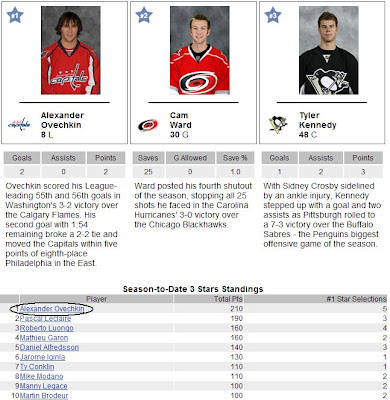 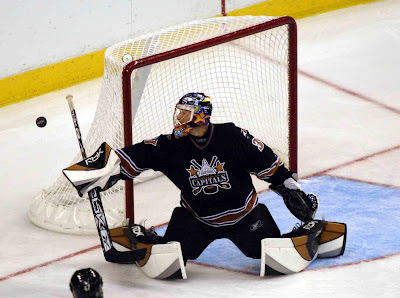 With last night's win -- his 300th as an NHL goaltender -- Olaf Kolzig joins some select company... 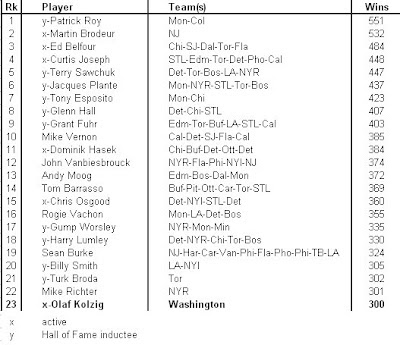 You'll note that 10 of the 23 goaltenders on this list are in the Hall of Fame. Of the six yet active goaltenders, four -- Brodeur, Belfour (currently playing in Europe), Joseph, and Hasek -- are virtual locks for induction when eligible. Chris Osgood has been a member of two Stanley Cup winners and has a Jennings Trophy on his resume. He hs six 30-win seasons, but no 40-win campaigns. Kolzig has taken his team to a Stanley Cup final and has a Vezina Trophy on his mantle. He has five 30-win seasons and a 40-win year.

He could pass Richter and Broda in wins this year, with an outside shot at passing Smith to crack the top-20 (the question being one of how many starts he gets in the last 11 games). If he returns for the 2008-2009 season, he could perhaps pass Burke and Lumley.
No matter...for a guy who waited more than five years after being drafted for his first win (January 27, 1995 -- against the Islanders) and nine years to become the number one goalie for the Caps, for a guy who ranks fourth in career wins among goalies having played for a single team, he has had a remarkable career characterized by skill and fierce determination. He is an icon in Washington sports --for his work both on and off the ice -- deserving of all the respect and good wishes that come with his achievement.
Congratulations, Olie, on #300...and here's to lots more before you hang up your mask.
Posted by The Peerless at 7:03 AM 7 comments:

I thought we were going to see a hockey game tonight.

“We did…the Caps and the Flames”

That was hockey?...all they did was whack each other’s sticks, take penalties, and skate around the middle of the ice.

Boring or not – and the Caps did their level best to lift the excitement level on “Back to the ‘90’s” night – the good guys skated off with a 3-2 win to keep their flickering playoff hopes alive and give Olaf Kolzig his 300th career win, all as a member of the Capitals. So bore away, Flames, bore away.

The story, though, was Kolzig. He looked very rusty in the first ten minutes, allowing rebounds on shots he would normally swallow up or steer out of trouble. But once he had his legs under him, he was superb. managed goals only on 5-on-3 power plays (ok, technically the second one just expired when the Flames scored). True, the Flames were essentially a one-line club (Jarome Iginla, Kristian Huselius, and Daymond Langkow combined for 11 of the Flames’ 26 shots, had both goals, and had all three points tallied by forwards). But Kolzig was up to the task when called upon, especially in that first period, when was launching shots from everywhere (17 in all in the first).

There were some pretty funky numbers in this one, as well as good news elsewhere…

registered 12 blocked shots in the first period – the Caps, none. Thing is, though, the Flames finished with 17, the Caps 15.

John Erskine skated eight shifts for the night – three of them ended in penalties…he had two of them. Erskine skated only one shift in the second period, taking a penalty.

If the Caps come up short in the stretch drive, it won’t be because Ovechkin failed to deliver. In six March games, he is now 8-6-14, +7. This was his 11th multi-goal game of the year and his 27th multi-point game.

Speaking of problem, how many chances did the Caps have tonight that they didn’t bury…Alexander Semin had Kiprusoff down and an open net and couldn’t get a backhand past the fallen goalie. Matt Bradley sent a puck behind Kiprusoff and through the crease. Ditto Tomas Fleischmann (who had his two chances, which coach Bruce Boudreau says he gets every game…he really needs to bury these). Eric Fehr had a chance from in close that Kiprusoff snatched with his glove. Ditto Ovechkin, who was left to gaze into the rafters.

In the points watch…Ovechkin needs four goals for 60, three points for 100, and he has two home games coming up. There seems to be a convergence taking place – the Caps remaining playoff chances might hinge on his hitting both this weekend.

Sergei Fedorov had perhaps his best game as a Cap. He didn’t register anything on the score sheet, but he was more dominant in the offensive zone than he has been in earlier games, and he was very good in the circle (winning 12 of 21 draws).

Perhaps it was a bad night for them, but it was painful to watch any other group than ’s first line try to do anything with the puck. It is not an especially adept passing team, at least it wasn’t on this night. They looked a lot like the Caps of the early season – that is not a compliment.

This was only the sixth one-goal loss in regulation for in 34 one-goal games.

The Caps caught a break tonight, as both teams in front of them – and – lost in regulation. They kept pace with , which won in this evening. The Caps remain seven points behind with one game in hand and two games remaining against the Hurricanes. They need all six of those points to have any chance at all of winning the Southeast.

This could yet be an interesting finish.

Posted by The Peerless at 12:33 AM No comments: