“We cannot make events. Our business is wisely to improve them.”
-- Samuel Adams

They were born 13 days apart in 1990, were unheralded as amateurs (one a fifth round draft pick, the other undrafted and signed to his first NHL contract as a free agent), and posted similarly modest numbers with the teams that drafted them.  They were acquired a year apart by the Washington Capitals, one becoming the unexpected glue that stabilized the defense on the team’s way to the Stanley Cup, the other obtained in an effort to see if lightning could strike twice with a player similar in size and style.

Michal Kempny was obtained from the Chicago Blackhawks in February 2018 for a conditional third round pick in the 2018 Entry Draft.  It was one of the more consequential trades in Caps history, although it hardly seemed so at the time.  Kempny provided stability to the defensive pairs, a key element in the Caps’ run to the Stanley Cup in 2018.  A year later the Caps tried to recapture the magic by trading defenseman Madison Bowey and a second round pick in the 2020 Entry Draft for Nick Jensen and a fifth round pick in the 2019 Entry Draft.  The second bite at the apple was not as nourishing.  Jensen did not have much of an impact on offense over his first season and a half in Washington, and while he had a reputation as a good skater and puck mover, he seemed to struggle here at times as well.  That the Caps would sign him to a four-year/$10.0 million contract upon his arrival in Washington complicated the matter, the impression being, if not a bad deal, then one of questionable value.

And then there was the 2020-2021 season.  Perhaps it was his being paired with Zdeno Chara much of the time, and the veteran’s experience and talent rubbing off on him, but Jensen had a solid year, scoring two goals (breaking a 165-game streak without one) and posting 15 points and a plus-5 rating in 53 games, a scoring line that looked much like that which he had when he was obtained from Detroit in 2019 (2-13-15, plus-1, in 60 games at the time).  It was by no means a dominating season for Jensen, but he was reliable and consistent as a third-pair defenseman.  He was out of the lineup for three games early in the season, the Caps and head coach Peter Laviolette taking a look at Jonas Siegenthaler and Trevor van Rimesdyk a look, and while the Caps went 2-0-1 in those three games, neither recorded a point, and both were a minus-1.  Jensen returned to the lineup for Game 9 of the season and remained in the lineup thereafter, going 2-11-13, plus-4 in his last 48 games. 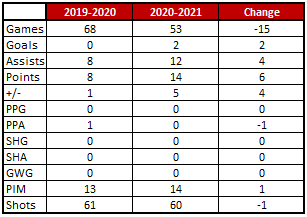 Fearless’ Take… If you are a John Carlson, you are noticeable in a good way when you put up points or in a bad way when you are a little too close to the action when the other team scores.  If you are a Brenden Dillon, you are noticed in a good way when you lay a big hit on an opponent or in a bad way when you are out of position when the opponents convert a scoring chance.  If you are a Nick Jensen, you have your best moments when you aren’t noticed.  You make the smart first pass out of your own end for a play that might unfold and be converted 30 seconds later.  You might have your stick in the right position to prevent a pass from being attempted, let alone made when defending in your own zone.  Jensen had a season in which much of his play was not noticed, and that was a good thing.  His numbers were middle-of-the-road among Caps defensemen – fifth of eight defensemen in points (14), tied for fourth in goals (two), tied for fourth in plus-minus (plus-5), sixth in average time on ice (17:18), tied for fourth in even strength on-ice goal differential (plus-4), fourth in hits (56), third in blocked shots (65), fourth in shot attempts-for on-ice percentage (50.2).

Odd Jensen Fact… Jensen played in seven games in which he recorded neither a hit nor a blocked shot.  The Caps were 5-1-1 in those games.

Odd Jensen Fact II… He was not missed when he took penalties.  While he was not penalized often (seven games with penalty minutes, all of them limited to a single infraction), the Caps were 6-0-1 in those games.

Odd Jensen Fact III… Jensen was the only Capital defenseman to dress for at least ten games and not be on ice for a goal scored for or against when the Caps were on a power play.

Game to Remember… March 7, 2021 vs. Philadelphia Flyers.  Players have shooting slumps, stretches of games where they couldn’t put a puck in the lake from the dock.  And then there was the slump in which Nick Jensen found himself.  In 108 games as a Capital before they visited the Philadelphia Flyers in early March he did not record a goal, and he had an overall streak of 165 games without one entering that game, not scoring one since he recorded a two goal game in a 5-3 loss to Toronto in October 2018.  The Caps took a 2-1 lead into the third period against the Flyers before Jensen provided some insurance…


Jensen would make it a memorable week at the Flyers’ expense, scoring his other goal of the season on the same ice sheet in a 5-4 Caps win over the Flyers six days later.

Game to Forget… April 29, 2021 vs. Pittsburgh Penguins.  Games against the Penguins are events, and when things go wrong, one would like to have them forgotten.  Such was the case for Jensen and the Caps in a late April game at Capital One Arena.  The Caps opened the scoring in the eighth minute of the game, but the Penguins tied it late in the first period. The teams exchanged leads in the second period, Pittsburgh taking the lead eight minutes into the middle period and the Caps recapturing it 15 minutes into the period.  But the Pens tied the game in the last two minutes of the second period to generate momentum that they carried into the third period, taking a 4-3 lead mid-way through the frame.  Tom Wilson scored in the last minute to tie the game once more and force overtime, but the Pens earned the extra standings point on a Jake Guentzel goal two minutes into the extra period.  For Jensen it was a difficult game.  He skated only 15 minutes, but he was on ice for three of the Pens’ four goals in regulation.  He had no takeaways, no hits, no blocked shots, and no good memories to take away from this game.

Postseason… It would not be unusual for a player not known for generating much in the way of offensive fireworks to be quiet when the level of competition ramps up in the playoffs.  In that context, Jensen going without a point in five games would not be entirely unexpected.  But this is now three consecutive postseasons with the Caps that Jensen has failed to record a point (0-0-0, minus-3, in 20 playoff games).  That is 0-for-49 in shots on goal while averaging 17:35 in ice time.  His even strength on-ice goals for and against was a mixed blessing.  While he was one of only two Caps not to finish in minus territory in even strength goal differential, and he was on ice for only two even strength goals against (tied with Zdeno Chara for fewest in the five-game series against Boston), he was on ice for only two even strength goals for.

Looking ahead… If one looked at his contract after last season and its $2.5 million cap hit, one would think Jensen was being overcompensated.  Looking at this year’s numbers relative to his cohort (defensemen age 27-33, cap hit of $2.25 – 2.75 million), he would seem to have more value.  The lingering question is how much of his improvement was due to Zdeno Chara’s steadying influence and experience.  If Chara is not back next season for the Caps, will the lessons last?

Nick Jensen had what was arguably his best season as a Capital.  The numbers do not jump off the page, but that is the point.  He is not a big points producer, he does not generate the highlight hit, and he isn’t often the skate from end to end sort of player.  He is, and was, a steady, dependable, consistent player when he is at his best.  In a third pair role, he found a comfort level he did not have in his first season and a half in Washington.