Washington Capitals: An Appreciation for Those Who Helped Deliver a Champion 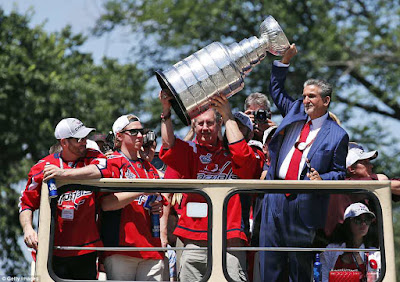 The parade is over, the parties are (largely) winding down, and the non-stop high octane celebrations are dwindling.  Now is the time to acknowledge those for whom the Stanley Cup in Washington is no small measure of sweet satisfaction.

And it starts at the top.  To Majority Owner Ted Leonsis, congratulations.  This championship is richly deserved.  When one lives the life of a sports owner as publicly as Leonsis, he is going to leave himself open to second guessing and criticism (heaven knows, we’ve been a party to it).  His openness led him to take the heat that might otherwise be directed at this manager or that player.  But despite that, he had the patience and determination to see this through, and the charge that he led in pursuit of the Stanley Cup as the organizational face of the franchise paid off.  He stands alone atop the pyramid in the DMV as a sports owner and manager.  And it will take considerable effort to knock him off that perch any time soon.  Well done, Ted.

Then there is Brian MacLellan.  When he was named general manager, some might have wondered why hire from within when there was so much disappointment and frustration that played out under previous management (of which he was a part).  Well, this is why fans and media don’t make personnel decisions.  MacLellan showed himself not only to be adept at constructing a roster, he didn’t seem to care much about how much he revealed in terms of strategy.  He was going to do it a certain way, he was going to be open about doing things a certain way, and there really wasn’t much anyone could do to get in his way.  Sure, he was the latest architect of a roster that disappointed in 2016 and 2017, but despite a two-year window that even in his own telling seemed to be closing, he added pieces to the roster to replace bigger names departing that proved to be the right ones.  It might not have been the most talented team the Capitals ever iced or that looked best on paper, but it was the “best” team where it mattered – on the ice.  And he, along with his staff, deserve a lot of credit for that.  Well done, Brian.

There is Barry Trotz.  How many coaches in any sport go from being literally one game from being fired to coaching a champion in the same season?  You can probably count them on your fist.  He did not have quite as bright a light shining on his perceived shortcomings as Alex Ovechkin, but there were parallels, most notably his never having coached a team out of the second round of the playoffs.  As the playoffs wore on, though, it seemed every choice he made was the right one – benching and then reinstating Andre Burakovsky, bringing Braden Holtby back into the lineup in Game 2 against Columbus, not using as a crutch the reuniting of Alex Ovechkin and Nicklas Backstrom on a line when it might have been the “safe” move to do so, taking the “hot” lap to relieve the tension before Game 7 against Tampa Bay in the conference final.  Life does not present many runs of good fortune like that, but it would be unkind and unfair to Trotz to pronounce it “lucky.”  After all, he came into this postseason as the fifth-winningest coach in the regular season in NHL history, and he had ten previous trips to the postseason as experience on which he could rely.  And one should not forget his having planted the seeds of success months ago, knowing that the club that lost to the Penguins in 2017 needed to heal, and meeting with Alex Ovechkin in Moscow in the offseason to talk about what the forward needed to do for the upcoming season.  For Trotz, the season was a coaching tour de force.  There wasn’t anything “lucky” about it.  Well done, Barry.

And the same goes for Trotz’ staff.  Todd Reirden, Lane Lambert, Blaine Forsythe, Scott Murray, Brett Leonhardt, Tim Ohashi, Mitch Korn, and Olaf Kolzig had to play their parts and fill their roles well to make sure that no part of the game – special teams, goaltending, team and opponent tendencies – could fall through the cracks.  These coaches made sure no stone was left unturned in finding an advantage to implement or a deficiency among opponents to exploit.  Well done, gentlemen.

Teams have to deal with the grind of an 82-game season, and it is hard on the bodies of even the most finely trained and tuned athletes.  Teams have to be current with what is going on around them across the league.  They have to provide the logistical and other support to make a long season bearable, allowing the players to focus on hockey.  The efforts of the medical, analytical, scouting, and operations staff often fly under the radar, but they are as important to the success of a champion as the more visible elements.  Well done, indeed.

And we cannot forget that as much as a sports organization, this is a media organization.  Mike Vogel, John Walton, and Ken Sabourin, whether out in front of the public on game days with commentary, interviews, and giving voice to the games, or behind the scenes preparing and producing content, made this a season to remember.  And to this group we would have to add Joe Beninati and Craig Laughlin of NBC Sports Washington, the best television broadcast pair in the NHL, period and point blank.  Each of these individuals made the memories of this season more vivid and meaningful.

Fans are generally fans of players, not of those who toil in suits.  But leadership, management, and media for the Caps (including those we might not have mentioned here) played no small role in achieving what has eluded this franchise for four decades.  They deserve the respect and appreciation by Capitals Nation for a job well done.

Photo: Getty Images
Posted by The Peerless at 12:34 PM No comments: