The Peerless Prognosticator is ON THE AIR!!! -- Eastern Conference Quarterfinals Game 4: Capitals at Rangers

Put your brooms away, Caps fans. There will be no sweep.  And what surprise is there in that?  The Caps went into Game 3 having lost all six times they tried to take a 3-0 lead in games in a seven-game playoff series.  The 4-3 loss to the New York Rangers Game 3 of the Eastern Conference quarterfinals was an iffy effort, by playoff standards, for the Caps.  We would have pointed out in our post-game review had we not had some technical issues to deal with. But what we had to say before we were so rudely interrupted by the fickle finger of fate has relevance to Game 4.

First, Braden Holtby’s fears that the Caps might have been too loose the day of the game were well founded.  After the pre-game skate he noted that confidence “[is] good to a point. I’m not sure we want it as loose as this morning.  It’s still playoff time and you never want to get comfortable. When you’re starting to get loose, you can tell guys are starting to get comfortable and what not.”  The Caps were entirely too loose in front of their own net.  All four goals were scored from within 15 feet of the Caps’ net… 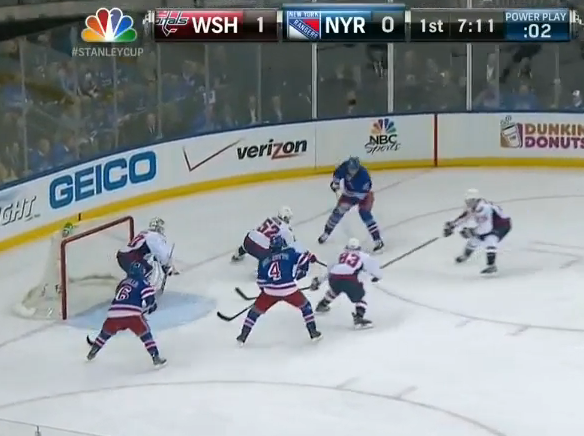 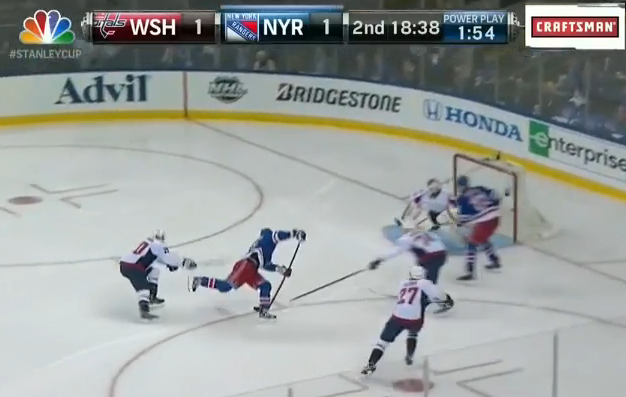 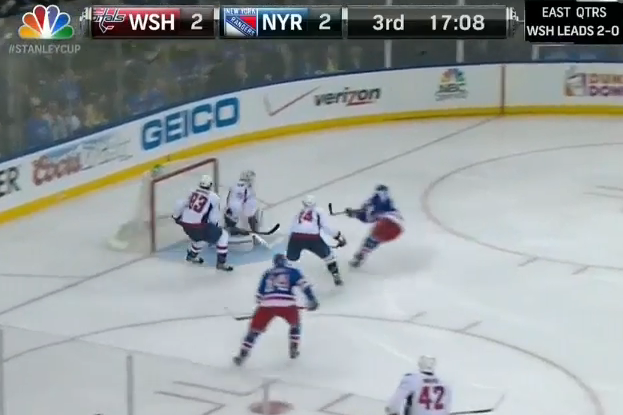 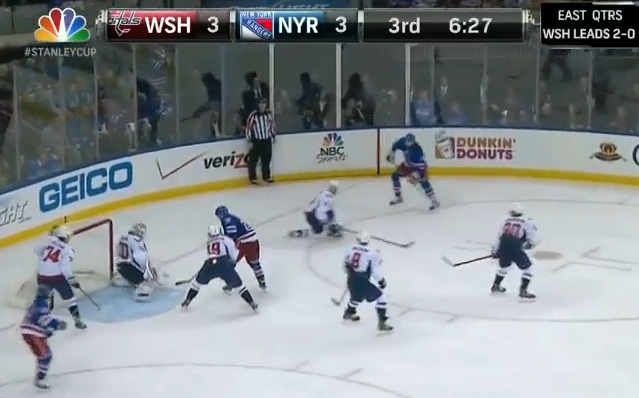 Get the picture?  And what is the common thread here?  A Cap is late getting into position to defend.  A day late and a dollar short might have been the takeaway from this effort, looking at these images.

As far as being too loose heading into this game is concerned, Holtby was his own worst enemy, taking a tripping penalty on Rick Nash early in the second period.  The Rangers scored a rare power play goal just eight seconds later.

If Caps fans can take solace in this result, it was that the one-goal difference was a product of the Rangers getting a power play goal and the Caps not converting on any of their three chances.  The Rangers would not be expected to outscore the Caps on special teams on a regular basis.

On the other hand, though, six power plays allowed is far beyond the Caps’ penalty killing comfort level.  The Rangers scored on their fourth power play – an example of that old “three-power-play” threshold biting the Caps.

Not that the Caps were entirely incompetent in this game.  Getting three goals at the expense of goalie Henrik Lundqvist is something to build on.  And you can say it was equal parts hard work and skill.  The hard work came from Nicklas Backstrom on the first goal, carrying Ranger defenseman Anton Stralman along the end wall and up the left wing boards before sliding the puck off to the point.  Then he circled back into the slot to get in position to deflect a drive by John Carlson for the game’s first goal.

Unfortunately, it was Backstrom who was victimized by Derek Stepan jumping to the top of the crease to tip in the game-winning goal.  Backstrom was a step late getting into position to try to lift Stepan’s stick.  He was not along having that problem.

The skill came when Mathieu Perreault stepped out and slid a backhand onto the stick of Mike Green, who had the presence of mind not to rush a shot, taking a step in before snapping the puck past Henrik Lundqvist.

One might say there was a bit of luck in Jay Beagle’s goal, but here lies a lesson, too.  Beagle came all the way across the circle on a faceoff to Lundqvist’s right, working himself into position to be an annoyance, a hindrance, or just a body in the way of the puck that Jack Hillen sent to the Ranger net.  Getting shots off and having bodies in front.  Teams practice that so that they might get “lucky” from time to time.  This is something the Caps need to do more often than they did in Game 3.

One of the problems in taking so many penalties is rhythm.  When the skill guys have to sit waiting for the penalty killers to do their thing, they cannot establish a rhythm.  This might not affect the top line guys who might get the call right after a penalty is kiiled off.  But the second line guys might suffer for it.  The Mike Ribeiro-Martin Erat-Troy Brouwer line finished the game with a combined five shots on goal, no points, and almost five fewer minutes as a group of even strength time as the top forward unit.

Rhythm was not the problem on the power play, though.  The Caps managed only one shot on goal on three power plays covering 5:54 of ice time.  The league's best power play had a bad night, made worse by not getting a shot on goal with a 6-on-4 advantage in the last minute of play with goalie Braden Holtby pulled for an extra attacker.  The power play has to be more dynamic and adjust to changes the Rangers appear to have made in their shot blocking strategy (not so inclined to leave their feet).

In the end, here is what it comes down to – Game 4.  Four times in franchise history the Caps won Games 1 and 2 at home.  In all four instances they lost Game 3.  However, twice they won Game 4, then went on to close out the series in five games.  Twice, they lost, then lost the series in seven games.  This is not likely coincidence.  Home ice advantage has been a sometime advantage across the NHL, it seems, but for the Caps it has been negligible in recent years.  It is simple arithmetic.  Lose Game 4, and the Rangers need only a split of two games on Verizon Center ice to win the series (so long as in doing so they win a Game 6 at Madison Square Garden).  And, the Rangers would have momentum heading into what would be a three-game series.

For the Caps, Game 4 is a chance (not the last one they will likely face, mind you) to answer the question if this year’s team really is different – more mature, more focused, more aligned with a winning system – or just another in a long history of teases.  We’re guessing it’s the former.

Posted by The Peerless at 6:21 PM No comments: