The Peerless Prognosticator is ON THE AIR!!! -- Game 10: Capitals at Flames, October 27th

The Washington Capitals, fresh (with a hint of gaminess) off a lackluster 4-1 loss to the Edmonton Oilers, conclude their three-game western Canada trip with a visit to Scotiabank Saddledome to face the Calgary Flames on Saturday afternoon in a 4:00 (Eastern) start.

Rest stop… there are seven Canadian teams, and six of them play in a “Rogers” (Vancouver, Edmonton) or a “Scotiabank” (Calgary, Toronto) or a “Bell” (Montreal, Winnipeg) facility.  And the odd one, “Canadian Tire Centre,” where the Ottawa Senators play, used to be a “Scotiabank” facility.  What's up with that?

OK, back to the prognosto…

The Capitals have yet to produce consecutive wins this season on their way to a 4-3-2 record (they were 4-4-1 after nine games last season).  Having lost in Edmonton on Thursday night, a “winning streak” will have to wait.  The immediate challenge, though is heading into a city whose hockey team just lost a game to the Pittsburgh Penguins in difficult, if very different, circumstances.  First, the Caps went to Edmonton right after the Oilers dropped a 6-5 overtime decision to the Penguins after leading in the third period.  Now, the Caps will visit Calgary a couple of nights after the Flames were pressure-hosed by the Pens, 9-1.  They are not expected to be a happy group.

Giving up the nine goals to the Pens was bad, but the one goal the Flames scored was unusual.  It was their lowest offensive output of the season after averaging 3.56 goals per game through their first nine contests.

The Flames are a team of considerable scoring balance.  Thirteen different players have recorded goals through ten games, and 18 of the 22 skaters to have dressed so far have points.  Elias Lindholm leads the team in goals with six.  The sixth-year center spent his first five seasons with Carolina Hurricanes, who took him with the fifth-overall pick of the 2013 entry draft.  He made steady progress in Carolina, eventually posting a career-high 16 goals in 2017-2018.  However, he was part of a significant trade last June, the Hurricanes sending Lindholm and defenseman Noah Hanafin to Calgary for Dougie Hamilton, Micheal Ferland, and Adam Fox.  After opening his first season in Calgary without a point on Opening Night, he has managed to record goals in five of the last nine games and points in six of them.  He has two of the Flames’ six power play goals thus far and two of the team’s five game-winning goals.  Lindholm is 3-5-8, minus-1, in 18 career games against the Capitals.

Johnny Gaudreau and Matthew Tkachuk lead the team in points with 12 apiece.  Two more different players would be hard to find.  Gaudreau is a wisp of a player; only five of 672 skaters to dress through Thursday are lighter than the 165-pound Gaudreau.  However, being slight of frame has not affected his durability much.  In four full seasons with Calgary coming into this season he missed only 17 games.  Over those four years he ranked 13th in the league in total points (287).  He is already in the top-30 in goals scored in Calgary franchise history (102/T-29th), assists (198/T-19th), and points (300/20th).  He started this season fast, going 1-6-7, even, in his first three games.  He has taken a more personal approach to scoring lately, though, posting four goals and an assist in his last six games.  Gaudreau is 1-6-7, even, in eight career games against Washington.

Tkachuk, taken with the sixth-overall pick in the 2016 entry draft, is like his father (Keith) before him, a power forward who plays with an edge.  The 166 penalty minutes he racked up in his first two seasons ranks in the top-30 among players in their first two seasons since 2005-2006 (30th).  But he has his father’s goal scoring touch, too (Keith had 538 goals in 1,201 career games).  He followed his rookie season of 13 goals in 76 games with 24 goals in 68 games last season.  He has been off and on so far this season, scoring a goal on Opening Night against Vancouver, and then following that up with a four-assist game against Vancouver in the second half of a home-and-home set to open the season.  Since then, though, he has two goals in eight games, but he also has five assists in that span for a total of nine helpers to lead the team.  Tkachuk has three assists in three career games against the Caps. 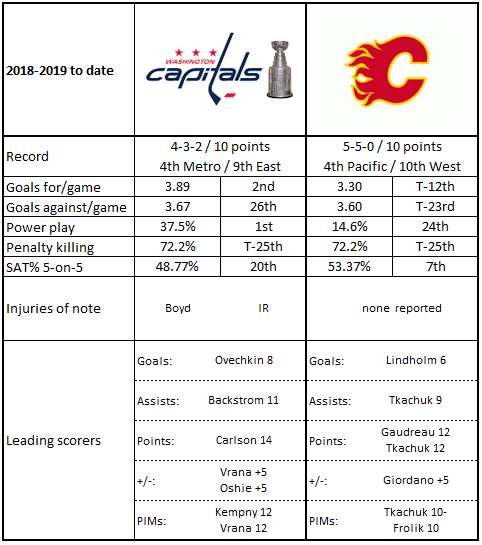 1.  Calgary sure likes its home cooking on the power play.  They are at 26.7 percent at home (eighth in the league) but only 7.7 percent on the road 27th).  And no team in the league has spent more time on the man advantage overall than the Flames (70:15).

3.  Calgary has trailed seven times at the second intermission of 10 games so far.  Only Anaheim has as many wins in that situation, though (two).  Then again, only Detroit (six) and Los Angeles (seven) have more losses than the Flames (five).

5.  The Flames have only played two one-goal games through ten contests.  They are 1-1-0 in those games.

1.  The Caps have yet to lose a one-goal decision in regulation.  The unusual part about that is that they are one of 19 teams that have not done so through Thursday (the Dallas Stars haven’t even played a one-goal game yet).

3.  When John Carlson scored the game’s first goal in the 5-2 win over Vancouver on Monday, it was the Caps’ first 4-on-4 goal of the season.  It might not sound like much, but the Caps had only two such goals all of last year and none the year before.

4.  The Caps put themselves in a special teams bind early in games.  Their minus-7:32 time differential between power play time and penalty kill time is fifth-lowest in the league.  That might be explained away as the power play scoring early on man advantage situations, but given the Caps unremarkable penalty kill (72.2 percent/T-25th), that one doesn’t smell quite right.

Nineteen skaters have appeared in at least three games for Calgary this season.  Defenseman Rasmus Andersson is the only one yet to record a point.  Andersson, taken in the second round of the 2015 entry draft (53rd overall) by the Flames, was a respectable scorer in Canadian juniors (21-103-124 in 131 games with the Barrie Colts in the OHL) and in the AHL (12-49-61 in 110 games with the Stockton Heat).  He had limited exposure with the Flames over the past two seasons, dressing for one game in 2016-2017 and 10 games last season.  His ice time is all over the place this season, ranging from 11:52 against Nashville on October 9th to 21:11 against Montreal on October 23rd.  It hardly seems to matter, though; the Flames are 2-2-0 when he skated more than 17 minutes and 2-2-0 when he skated less than 17 minutes.  Andersson has never skated against the Caps.

How many Caps fans would know that if Nicklas Backstrom scores a goal against the Flames, he would tie Alan Haworth and Mike Gartner for most goals scored by a Capital in Calgary?  If Backstrom lights the lamp, it would be his fifth goal in Calgary against the Flames, tying those two former Caps (and if Alex Ovechkin gets a hat trick, he’d have six, but that’s another story).  Backstrom, in typical quiet fashion, is building himself a nice and tidy early season scoring line.  He has points in seven of the Caps’ first nine games, including four multi-point games, tied for eighth-most in the league, on his way to a 2-11-13, plus-4 start.  Those 11 assists are noteworthy.  It is the third time in his career that Backstrom topped the ten-assist mark in the first ten games of the season (he did it in eight this time).  He is the only Capital to have hit the ten assist mark in ten or fewer games to start the season more than once. Bengt Gustafsson, Randy Burridge, Dale Hunter, Marcus Johansson, and Evgency Kuznetsov are the others to do it (with a pair of assists in this game, Kuznetsov could do it for the second time).  Backstrom is 7-13-20, plus-6, in 15 career games against Calgary.

The Caps looked a step slow on offense against Edmonton on Thursday.  They might catch a break here, though.  Calgary goalie Mike Smith has allowed four or more goals in five of seven appearances so far, and since shutting out the Nashville Predators, 3-0, on October 9th, he is 1-3-0, 5.43, .832 in four appearances, including a six goals in 21 shots disaster in the 9-1 loss to Pittsburgh on Thursday.  The Flames have experimented with David Rittich in goal, and he has been effective in limited duty (2-1-0, 2.37, .933), although he was touched for three goals on 15 shots against the Penguins.  Those numbers against the Penguins suggest that Calgary will be an ornery bunch come Saturday night, leaving Caps fans to hope that the “Calgary Stampede” refers only to the annual rodeo festival and not the Flames running roughshod over the Caps.