Washington Capitals: On the Importance of Star Power and the Wisdom of Trading a Star

Once upon a time, in a land far, far away… ok, Washington, D.C.,… there lived a sportswriter.  Talented with word and phrase, he was among the best in the nation at his craft.  He was a reporter and a storyteller, equal parts thoughtful and provocative.  He was one of the few columnists in his profession – not limited to sports – who could have been honestly referred to as a “must-read.”

Then, perhaps tempted by the lure of television, he sold his soul to the devil.  He became a television commentator.  And in a blindingly short time, he lost all vestiges of thoughtfulness and became little more than a provocateur.  We could say he became sports’ answer to the “grumpy old man,” but it turned out that he merely sat across from the “grumpy old man” as part of a daily schtick of “can you top this” comments that would rarely fail to provoke but, sadly, rarely succeeded to inform.

He had become “The Man with Attitude,” who perhaps fancied himself as “The Man of All (Sports) Seasons.”  Stripped of the bluster, though, he seems to be painfully uninformed with respect to sports like hockey.

On Friday, The Man with Attitude turned his attention to the Washington Capitals and star Alex Ovechkin.  As noted by Dan Steinberg of the Washington Post…

“…Tony Kornheiser and Michael Wilbon were asked to consider a hypothetical: If the Caps lose to the Penguins in five games, Alex Ovechkin should be [blanked]. What is the proper word?”

The Man with Attitude went right for the clicks…

“Traded...if the Caps lose to the Penguins in five games, Ovechkin should be traded.”

The comment displays a surprising ignorance (or at least a blithe attitude) toward how hockey is played and the limited contributions even a high-powered star might have to the success of his team, especially in the postseason. Such talent and performance is a necessary but, and here is the important part, insufficient ingredient in postseason success.

Let’s put this in way.  What symbol of postseason success on an individual level -- of rising when the light shines the brightest -- is more obvious than winning the Conn Smythe Trophy as the most valuable player of the playoffs?  A perusal of the list of Smythe Trophy winners in the Ovechkin era yields the following: 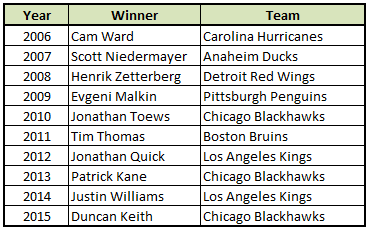 You will find some fine players on that list, even some potential hall of famers.  But none of them can be considered on the shortest of short lists as best players of the era, not Evgeni Malkin, who has been injured too much without the outsized production to offset it; not Patrick Kane, who hasn’t been doing it long enough at high enough a level.

Even as players emerge to take their place on the short list of best players, only to recede in favor of other emergent players, two names – and really, two names alone – have persistently maintained a firm grasp on their place among the best players in hockey.  Ovechkin and Sidney Crosby is really as long as that list gets.

On an individual level, in the post-2004-2005 lockout era of the NHL, Ovechkin ranks ninth in total postseason goals scored, despite playing at least 23 fewer games than the eight players ahead of him on that list.  No one has a higher goals-per-game average.  Only three players – Crosby, Malkin, and Kane (all centers or with center experience with more playmaking responsibilities that add to assist totals) – have a higher postseason points-per-game average.  There are 11 players with more game-winning goals than the six Ovechkin has, but the only one to have played in fewer playoff games than Ovechkin (83) on that list is Teemu Selanne (81).

We could dip into the underlying numbers, touching on the fancy stats to which folks pay attention these days (and where Ovechkin’s Corsi-for at 5-on-5 of 54.5 percent in the current era is better than Crosby’s 53.2 percent; numbers from war-on-ice.com), but it would be a temptation that distracts us from the principal point to be made here.  Hockey is a team game.  Eighteen skaters participate in each and every game.  Some more than others, to be sure, but no one gets a night off on the bench.  And frankly, Crosby’s teams, whether they were in Pittsburgh or representing Canada, were simply better top to bottom.  Ask yourself, in 2009, when these two teams last met in the NHL postseason, if you took Crosby and Ovechkin off of their respective clubs, which one would you have picked in a seven-game series?  Would that series have even gone seven games (as it did in 2009)?

Remember, too, that in 2009, that Penguins team won the Stanley Cup in a Game 7 against the Detroit Red Wings with Crosby missing the last 9:53 of a 2-1 game, albeit due to injury.  And in the end, it was teammate Evgeni Malkin skating off with the Conn Smythe Trophy as the postseason’s most valuable player.  Crosby was arguably the best player in the world that season (although Ovechkin won the Hart Trophy as most valuable player), but not in its postseason.

Since that 2009 Stanley Cup, Crosby has appeared in 61 postseason games, Ovechkin in 62.  Crosby’s Penguins have a record of 31-30 in those 61 games, Ovechkin’s Capitals have a record of 30-32.  Crosby has 22 goals in his 61 games, Ovechkin has 26 goals in his 62 games.  Crosby has more assists (43 to 24), but that is as much a product of the position he plays as anything else.  Ovechkin’s Capitals have won four playoff series since then, Crosby’s Penguins have won five.  Crosby’s Penguins have gone to a conference final, where Ovechkin’s Capitals have not, but both players have been on postseason teams that were eliminated in the first round twice in six postseasons leading to this one.  There is little difference to be found here.

The Man with Attitude opined that if the Capitals had been eliminated in Game 5, that Alex Ovechkin should be “traded.”  Turn that around.  If the Penguins were to blow a 3-1 lead in games, and Crosby does little or no better than the two points he has in this series (both assists), would the answer to the hypothetical “If the Penguins lose to the Capitals in seven games after holding a 3-1 lead, Sidney Crosby should be [blanked]” be “traded?”

Of course not.  The answer is silly on its face, just as the same answer to the question posed to The Man with Attitude is silly on its face.  Alex Ovechkin and Sidney Crosby are two of the most productive players of this or any era in NHL history.  Over the last seven years, their postseason records have been remarkably similar, individually and in the context of the performance of their respective teams.  But that seems to be an entirely too nuanced an opinion for those such as The Man with Attitude.  For Ovechkin, he went right for the message board fan’s remedy – “trade him.”  Pity.  Once upon a time, he was capable of so much more.