The Peerless Prognosticator is ON THE AIR!!! -- Game 74: Devils at Capitals, March 26th

The Washington Capitals return home on Thursday night to host the New Jersey Devils in the last meeting of the teams this season.

Despite this being the fifth meeting of the season between the Caps and the Devils, it will be the first since the Devils decided to employ a two-headed head coaching framework, one of those heads belonging to former Capitals head coach Adam Oates.

The Caps return home after a 2-1-0 road trip and clinging to a three-point lead over the Ottawa Senators for the first wild-card spot in the post season.  The Boston Bruins are just four points back, threatening to push the Caps out of the playoff picture altogether.

Meanwhile, the Devils are already out of the playoff picture, for all intents and purposes.  With nine games to play, New Jersey is 12 points behind Ottawa for the last seat at the post season table.  A so-so March (5-4-1) has done them in.  It is part of a longer, not quite good enough record the Devils have posted since instituting the coaching experiment (19-14-4).

The March record has featured a lack of goal scoring, for and against, as the Devils have outscored their opponents by a 23-21 margin in ten games.  Their power play has been decent overall (4-22/18.2 percent) but has dried up of late – both in number of opportunities and conversions – going 1-for-11 in their last seven games.  The penalty kill is 12-for-24 in March (87.5 percent), but it has allowed power play goals in two of the Devils’ last three games (6-for-8/75.0 percent).

Adam Henrique leads the Devils in goals and points in March (4-4-8), pushing him into the team lead in points overall (16-24-40).  Until coming up empty in his last two games, Henrique had points in six of seven games.  He has an assist in three games against the Caps this season (0-1-1, minus-4) and is 2-4-6, minus-7 in 13 career games against Washington.

It is no small surprise that the Devils’ second most frequent goal scorer in March is Jordin Tootoo (3-1-4).  Through 59 games Tootoo has nine goals, his second highest total in an 11-year career and exceeded only by an 11-goal season with Nashville in 2007-2008.  His 15.0 percent shooting percentage is a career high, and when he recorded a power play goal in the Devils’ 3-2 loss to Columbus on March 6th, it was his first power play goal in three seasons and just his second power play goal over a ten-season span.  Tootoo is 1-0-1, minus-3, in 11 career games against the Caps.

Cory Schneider is among the league leaders in most goaltending categories – fifth in goals against average (2.17), third in save percentage (.928), tied for seventh in shutouts (5), third in total minutes played (3,614).  He is second in the league in save percentage at even strength (.936) among goalies playing in at least 20 games.  What it has been for Schneider, however, is a frustrating year.  Despite the fine individual numbers, he has just 26 wins, 15th in the league.  The frustration has spilled over into March.  He has good individual numbers – a 2.08 goals against average and a .935 save percentage in eight games – but his record is just 3-4-1.  A certain inconsistency has crept into his game, though.  Over his last ten appearances he has allowed fewer than two goals five times, but he has also allowed three or more four times.  In seven career appearances against the Caps, Schneider is 3-4-0, 2.10, .924, with one shutout. 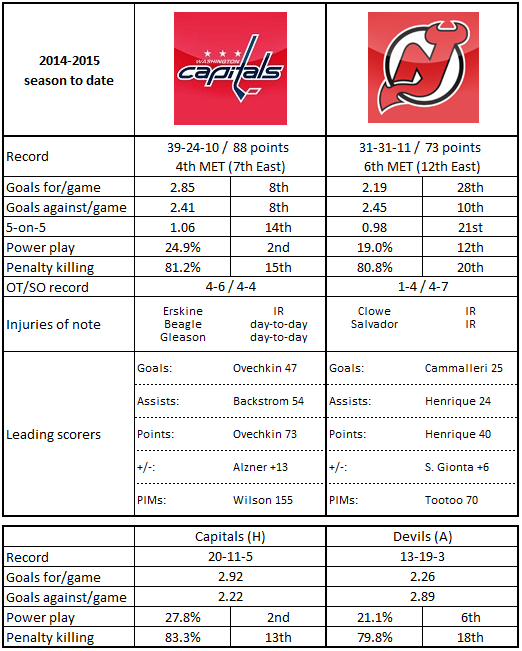 1.  New Jersey has the seventh-worst goal differential in road games this season (minus-22), largely a product of having scored the third-fewest goals on the road (79).  Only Toronto and Buffalo have scored fewer goals on the road, not exactly the neighborhood in which one wants to travel.

3.  New Jersey does get out to leads – they are tied for tenth (with Chicago) for most first scores in the league.  However, they do little with early advantages.  The Devils have the fifth-worst winning percentage when scoring first (.575/23-9-8).

1.  The Caps could benefit from stepping up their game down the stretch.  They are 6-4-0 in March, outscoring opponents by a 27-18 margin.  They have just four goals in their four losses, three of those losses coming at home.

4.  Tom Wilson has more penalty minutes recorded over the last two seasons (306) than all but two players in the NHL – Antoine Roussel (335) and Steve Downie (329).

Andy Greene is not generally thought of as a prolific offensive defenseman.  In nine seasons, including this one, he has topped 30 points just once (31 points in 2009-2010) and has never recorded more than eight goals in a season (eight in 2013-2014).  However, he started March on a tear, going 1-5-6 in six games to open the month.  Add in a game-winning goal to close February, and Greene was on quite a roll.  His scoring is tightly bound with Devils success, too, the team going 12-5-2 this season in games in which he recorded at least one point.  However, he cooled off of late, going without a point in his last four contests.  In 28 career games against the Caps, Greene is 2-6-8, minus-12.

Mike Green (no relation) seems far removed from those days when he was potting power play goals, finishing overtime games, and generally performing as the top offensive defenseman in the game.  This season he is 23rd among league defensemen in points (39), and he is tied for 56th in goals (6).  He has just one goal in his last 23 games and has ten points over that span.  He is shooting in poor luck, that one goal in 23 games coming on a total of 49 shots (2.0 percent), and his 4.3 percent shooting percentage for the season is his lowest since he shot 2.9 percent in 70 games in 2006-2007.  In 26 career games against New Jersey, Green is 7-9-16, plus-5.

Scoreboard watching will be tempting over the next three weeks, but as long as the Caps tend to business they control their own destiny.  Part of that is dealing with teams that have dropped out of the playoff race, and the Devils are in that category (though they have not been technically eliminated).  New Jersey is one of those nuisance teams that is a pain to play against, one against which offensive opportunities are scarce and even when presenting themselves are usually foiled by an excellent goaltender.  That speaks to the need to play with 60-minute focus.

The Caps have been successful against the Devils this season, posting a 3-1-0 record in four games and outscoring the Devils, 14-4.  The Caps have been especially adept at shutting off the Devils power play, killing all 11 shorthanded situations faced in the four games.  That sounds like a good enough formula to make it four wins in five games.

Down the Home Stretch: Schedule for the Eastern Conference Wild Card Candidates

Here it is, the last 18 days of the 2014-2015 season, and three teams are fighting for two wild card spots in the Eastern Conference -- the Washington Capitals, the Ottawa Senators, and the Boston Bruins (our apologies to the Florida Panthers, but in a team where three-point games are not uncommon, making up six points with nine games to play to overtake Ottawa is a tall order).  Here is how the schedule plays out... 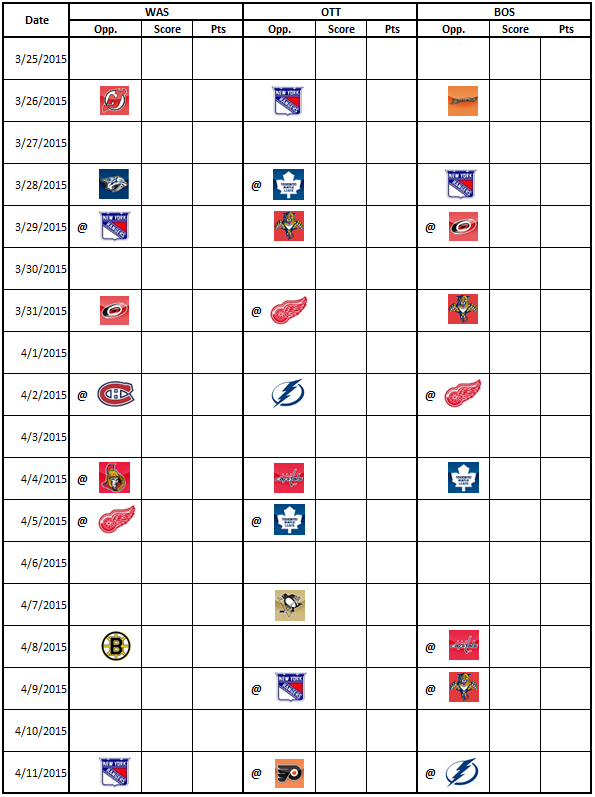 Some things to note...

We will be updating this from time to time, hoping it will all work out in the end for the Caps.
Posted by The Peerless at 10:01 AM No comments: